On April 6, 2021, a fire broke out at a solar-plus-storage facility in Hongseong-gun, Chungcheongnam-do, South Korea. Investigation found the cause of the fire was an ESS device that was installed in 2018. The facility had 3.4 MW of PV generation capacity and 10 MWh of energy storage capacity, of which key cell components were manufactured by LG Chem Ltd. in 2017. The blast occurred at No. 7 ESS unit of the facility, destroying around 0.5 MW of energy storage batteries. There were no casualties, but resulted in SRW 440 million of financial loss.

Presently, more than 20 ESS fire incidents were caused by lithium-ion batteries made by LG Chem. This, doubled with Hyundai’s Kona Electric battery recall due to allegedly faulty cells supplied by LG, posed concerns and doubts towards the safety of lithium-ion battery energy storage and the reliability of battery cells from LG.

More than 30 ESS fire incidents had occurred in South Korea so far. The series of conflagration has called into question the safety of NCM/NCA batteries in energy storage and raise high concerns for this ought-to-be-solved issue in related industries, since it is the second largest applied industry for lithium-ion batteries, following the EV industry.

The Ministry of Trade, Industry and Energy of South Korea passed policies regarding ESS safety on February 2020, under which international standards for ESS manufacturing and installation are established. The policies aim to strengthen verification process for crucial components, such as batteries and PCS, fortifying insulation systems, form stricter controls over operating environments, temperature, humidity, and the amount of dust, and establish fire safety procedures and standards. (Keeping a SOC below 80% and 90% for indoor and outdoor ESS, respectively.)

According to the lithium battery fire investigation report this time, three major causes were identified, including the lack of battery overcurrent and overvoltage protection, the needs for improvements on operating environment (humidity and dust) and installation processes, and the lack of experiences in ESS integration and management.

Fortunately, occurrences of such incidents have dropped markedly in the past year, as compared to 2018 and 2019. This could be ascribed to increasing awareness of energy storage safety. Taking lithium-ion batteries and ESS for example, presently, mainstream safety standards and certifications include UL, IEC, and IEEE, as well as UL 9540, IEC61850, and IEC62933. Meanwhile, more and more countries or regions have set up their own safety standards. Besides the ESS itself, regulations on grid connection are with vital importance for electricity to be safely transmitted. Indeed, safety issues are interconnected, and every single detail shall be attended to carefully.

Senior ESS analyst Yuan Fang-wei of InfoLink Consulting noted that the successive fire incidents in South Korea have sparked wide discussions across industries and promoted lithium-ion battery energy storage. Like EVs, fires caused by lithium-ion batteries are still inevitable. But the key lies in how we can minimize occurrences and casualties through the advance of technologies and the reinforcement of preventive measures and regulations. Senior ESS analyst Yuan sees a prosperous future for both NCM and LFP batteries in the field of energy storage. 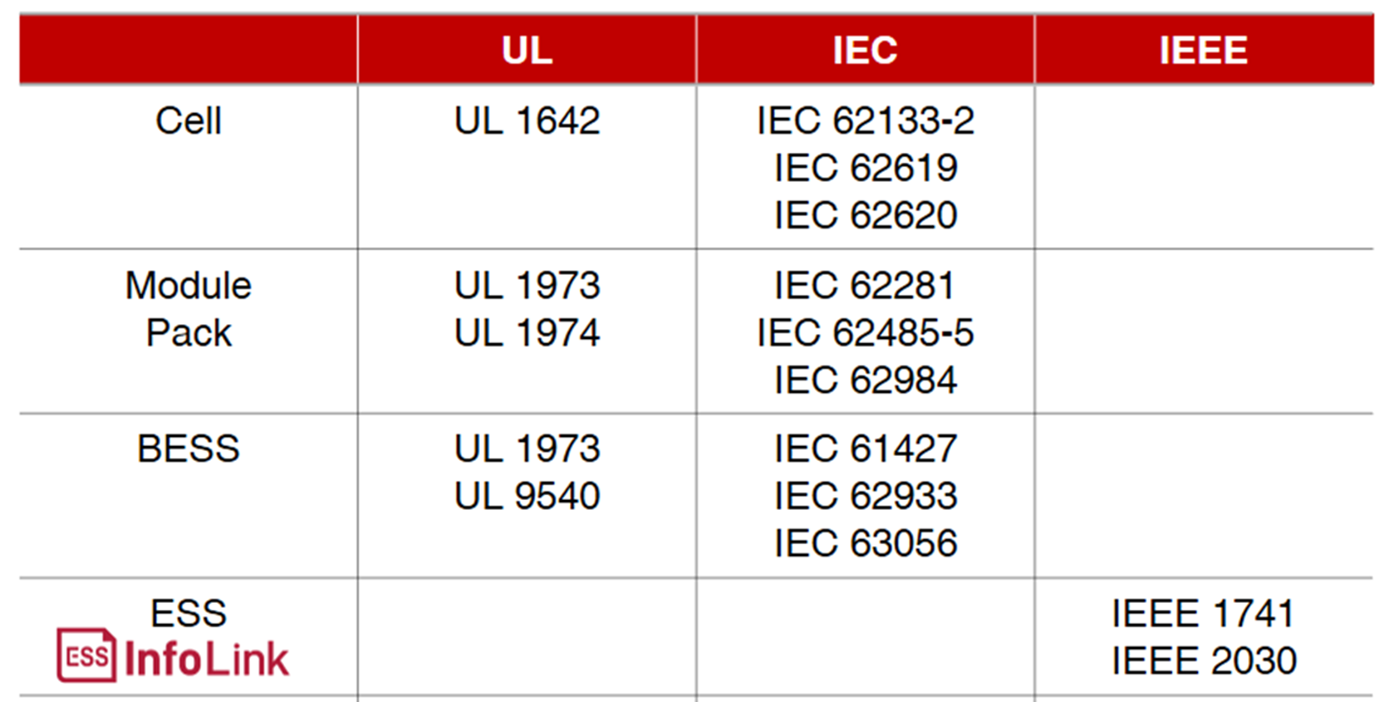