India’s 2020 budget has proposed to raise basic customs duty (BCD) to 20% on imports of solar cells starting Feb. 2, according to the notification issued by the Indian government recently.

Based on the new duty structure, the Indian government will split the tariff item 8541.40.11 under the Harmonized System (HS), an international classification system for traded goods, into the following items:

However, the existing BCD rates on solar cells, whether or not assembled in modules, shall continue. 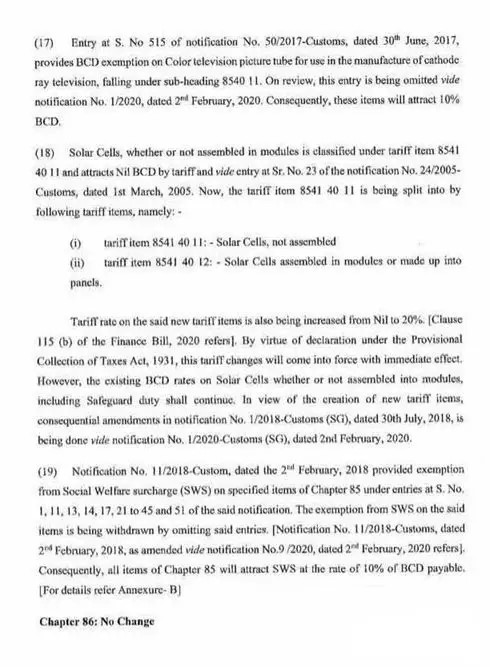 Therefore, foreign solar cells arrive in India will remain unaffected despite the launch of new BCD and the splitting-up of the HS Code for solar cells. In other words, imported solar cells will continue to be subject to the 15% safeguard duty until it expires on July 29. 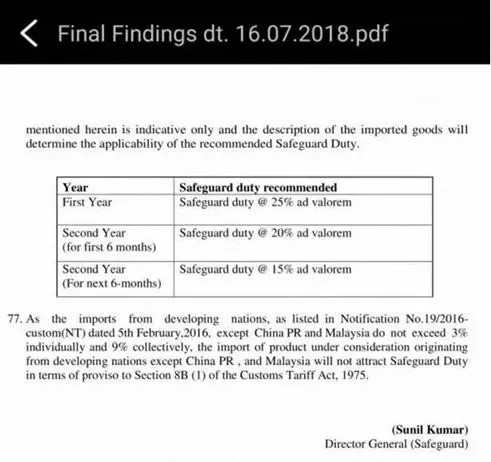 Some lawyers in the know argue that the safeguard duty is a temporary relief, which cannot be reintroduced after it expires and must be reduced in effect annually under the WTO rules. By this line of reasoning, the spilt of the HS Code for solar cells, coupled with an increase in the BCD from 12.5% to 20%, is seen a stopgap solution to protect the Indian PV industry after the safeguard duty expires on July 29. Once the duty does expire, the Indian government may cancel the BCD exemption of goods under HS Code 8541, subjecting imported cells to a 20% duty.

According to figures released by Bridge to India, foreign solar panels dominated 90% of the market in India one year after the introduction of safeguard duty, because Indian developers have pivoted to modules imported from countries such as Vietnam, Singapore, and Thailand. With the solar market having been taken over by cheap imported products, Indian manufacturers are seeking to expand into emerging and potential solar markets to generate profits.

PREV Potential impacts of India’s 20% BCD on solar cells, modules
China’s AD, CVD on polysilicon imports from U.S., South Korea remain the same in 2020 NEXT
Back