InfoLink projects developments of energy storage based on the current situation and future demand and divided the developments into front-of-the-meter (FTM) and behind-the-meter (BTM) storage. Drivers behind FTM storage include Taipower’s ancillary services, which will continue to expand, as well as application in wind and PV power plants. Although the application in renewable energy generation is not regulated so far, InfoLink believes that the renewable sector provides the biggest potential for energy storage in Taiwan, just like how the U.S. and China developed its energy storage industry.

C&I sector for BTM storage applications is driven by the “major electricity consumer clause.” However, Taiwan does not provide a favorable condition for businesses to utilize energy storage for now. Other international regulations include RE 100 and ESG. Other drivers include the lowered threshold of 800 kW under the “major electricity consumer clause,” islets, and charging stations.

Development of energy storage in Taiwan is quite similar with that in China. Residential-BTM storage is difficult to develop without mandate policy because electricity rates are cheap, energy supply is stable, and equipment is expensive. Therefore, Taiwan will focus on developing FTM storage, followed by BTM-C&I. InfoLink projects that FTM storage will make up 90% of the energy storage deployment in Taiwan, with solar-plus-storage applications reaching 50%. In terms of economic scale, energy storage market is expected to surpass NTD 10 billion by 2023 and NTD 20 billion by 2026. The total energy storage economic scale is likely to reach NTD 200 billion by 2030 if the industry retains its rapid growth. This offers opportunities for industries and businesses that seek transformation. 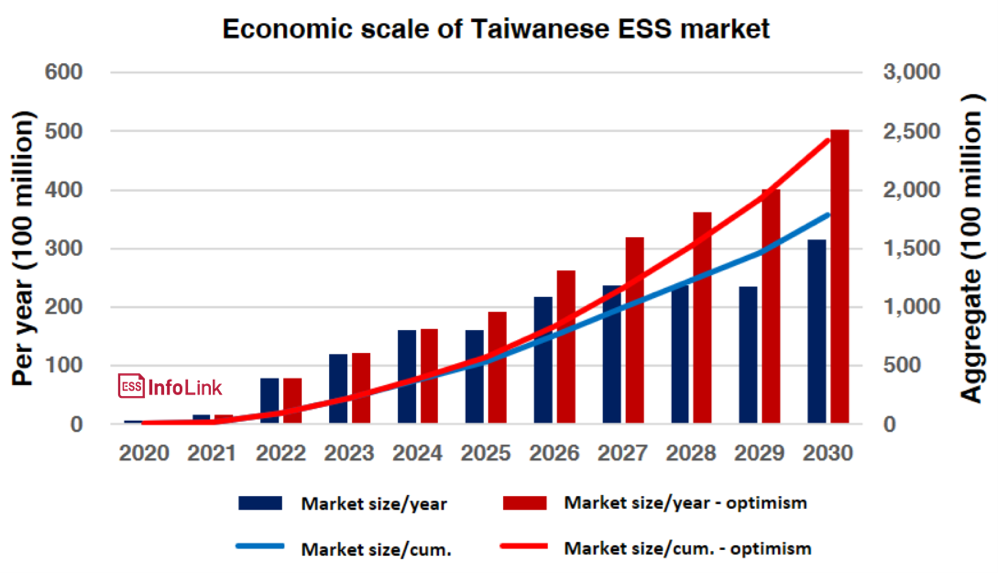