The U.S. added 1.4 GW / 3.5 GWh of electrochemical energy storage capacity in 2020. In 2021, the nation accumulated 3.5 GW / 10.5 GWh of installed ESS capacity, approximately 300% of growth, with the front-of-the meter (FTM) market contributing 3 GW / 9.2 GWh of capacity. Out of these energy storage capacities, more than 90% are integrated with renewables, among which solar-plus-storage accounted for 60%, underlining the imperative of solar-storage integration. California, Texas, Illinois, Massachusetts, and Hawaii hold the most installed capacity in the U.S., with California alone taking up 50% of share. How energy storage market in the U.S. flourish? Here’s three key reasons for that.

Given its geographical position and land area, weather is quite unstable in the U.S. Recently, hurricanes, tornados, draughts, and storms result in unexpected power outages. In February 2021, a storm caused 42 hours of blackout in Texas, affecting 70% of residents, 4.5 million households and cooperates, and was responsible for 48 deaths.

In the U.S., electricity grids are rather old and independent, and thus struggle to dispatch electricity on a large scale. Even though the Electric Reliability Council of Texas connects grids together, it is still difficult to dispatch power under extreme weather.

To improve reliability of the grids, a raise in electricity cost is inevitable. Therefore, in the light of this power outage, Tesla will construct 81-Megapack, an energy storage project with 100 MW / 200 MWh of capacity, hoping to wean the region off distributed grids and raise awareness of the importance of residential energy storage.

Incentive policy is the major driving force behind the growth of installed ESS capacity in the U.S. The country set goals to use 100% renewables by 2035 and reach net-zero by 2050, with several bills investing thousands of millions of dollars on energy storage projects. For example, California Public Utilities Commission’s assembly bill (AB) 2514 requires investor-owned utilities to purchase 1325 MW of ESS by 2020 and begin operation by 2024, as shown in Fig. 1 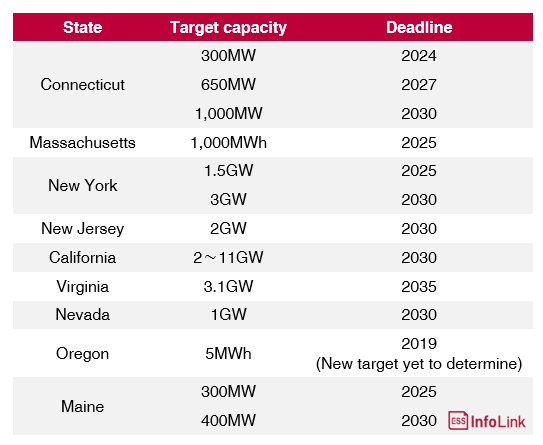 Fig. ESS capacity targets of states in the U.S

Meanwhile, the Investment Tax Credit (ITC) and Self-Generation Incentive Program (SGIP) give strong momentum for the development of ESS in the U.S.

The ITC reward private sectors that invest in renewable energy projects, allocating tax credit for ESS with at least 5 kWh of capacity. At the end of 2020, the Build Back Better Plan extend the ITC to 2033. Originally, subsidy for constructing ESS will end in 2022, with subsidy rate declining over the years since 2020. As of now, the ITC will run until 2031 and start to step down in 2032.

The SGIP, with USD 1.2 billion of budget, categorizes installers based on risks and income and provides rebates in stages. In addition to that, the U.S. shell out USD 11.6 billion, in hope to reduce the cost for long-duration energy storage by 90% to USD 0.05/kWh. 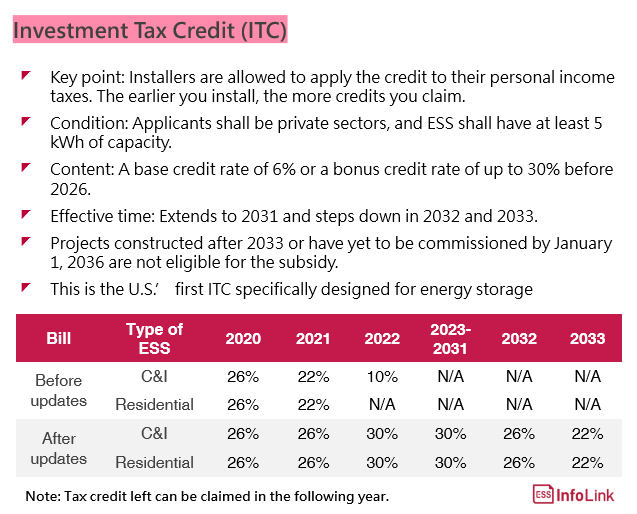 Fig. First ITC for energy storage in the U.S

The profit models for energy storage are various in the U.S. In addition to subsidies, the electricity market has more diverse ESS application scenario, allowing different ESS to choose fitted markets according to their functions and capacities. For instance, there are three types of ESS application in California, namely proxy demand response (PDR), distributed energy resources (DER), and non-generator resource (NGR). Each application participates in different markets, with profit models including auction, long-term ancillary service agreement, energy arbitrage, etc. Besides energy arbitrage, residential ESS can reduce electricity bill through self-consumption

The U.S. see much higher willingness for installing ESS than other countries, due to its geographical environment, active governmental supports, diverse profit and business models. With abundant FTM markets, the country secures the largest share of energy storage capacity around the globe. In the meantime, behind the market (BTM) C&I market and residential market each added 160 MW and 430 MW of capacity in 2021. The growth is not much but steady. Incentive policy is the strongest driving force behind the sweeping and rapid growth. For more details on ESS development around the world, contact us at service@infolink-group.com

PREV ESS in China: Supportive policy to accelerate market growth
Global battery capacity could hit 1,500 GWh by 2023 amid EV battery shortage and rising prices NEXT
Back