As PV manufacturers published their 1H22 financial results, InfoLink found that top five largest vertically integrated companies’ net profit and revenue witnessed significant growth, which can be ascribed to increased shipment volume. InfoLink’s calculation shows that the top-five shipped a total of 78.644 GW of modules in the first half of the year, up 48% from 52.968 GW in the same period last year.

Despite marked improvement in sales volume and revenue, costs remained high due to high materials prices in the upstream and complicated international trade and policies. As a result, gross margin differs among companies, with most of which seeing no significant growth, reflecting that manufacturer had to deal with challenges from cost structure and profitability in the first half. 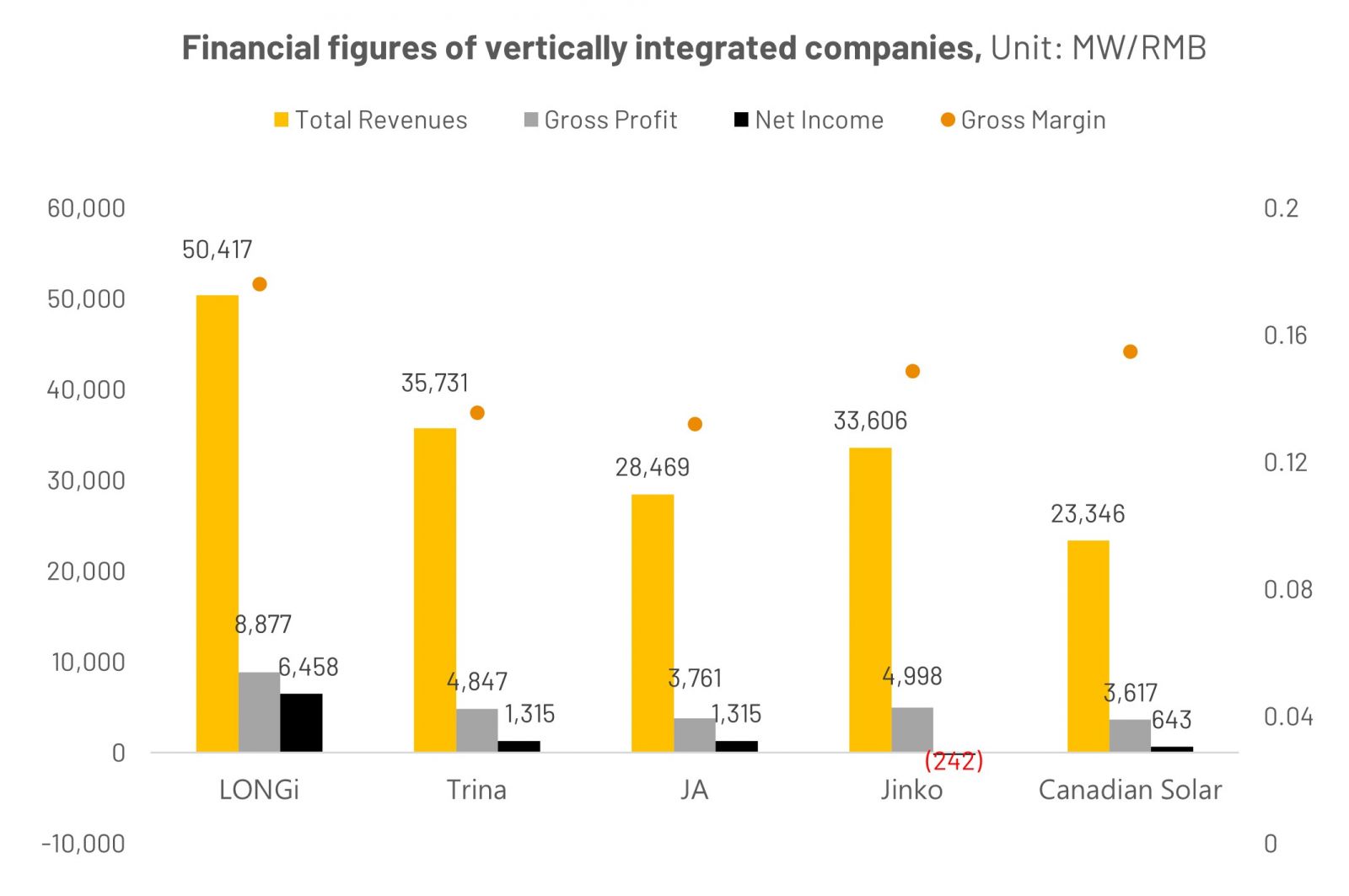 Source: LONGi Group’s financial results for the first half of 2022

Benefiting from increases in wafer and module prices, Longi’s revenue stood at RMB 50.4 billion, up 43.6% compared with RMB 35.1 billion in the same period last year. Its gross margin was 17.6%, which decreased by 4.9% YoY, as raw materials shortage and increased prices resulted in higher increase in costs than in revenue. Yet, Longi’s gross margin was higher than other manufacturers, for its product offerings include wafers that can generate higher gross margin.

In terms of capacity expansion, Longi paused its plan to build facility in Yunnan due to electricity rates reason. It then shifted focus to pushing forward its mono ingot and slicing project with annual capacity of 46 GW in Ordos, Mongolia, and Longi Leye‘s 15-GW high efficiency mono-Si cell project as well as 4-GW mono-Si cell project in Xixian New Area in Shaanxi.

Source: Trina’s financial results for the first half of 2022

Trina is actively promoting modules featuring 210mm cells. It expects to bring cell capacity to 50 GW by the end of this year. Of which, lines dedicated to 210/210R accounted for more than 90%. It is to secure its leading position in large format high-efficiency cell and module. Its module capacity is expected to reach 65 GW by the end of the year.

Source: Jinko’s financial results for the first half of 2022

Jinko posted RMB 33.6 billion of revenue in the first half, up 112% YoY compared with RMB 15.9 billion in 2021. Cost of goods sold (COGS) increased along with sales volume, from RMB 13.15 billion to RMB 28.6 billion. The range of increase was slightly higher than in revenue due to increased materials costs, resulting in a drop in gross margin, from 17.1% to 14.9%.

During the reporting period, Jinko embodied 43 GW of wafer capacity, 42 GW of cell capacity, and 50 GW of module capacity; it planned to bring capacity to 60 GW, 55 GW, and 65 GW, respectively. In addition, more n-type capacity is expected to bring online.

Source: JA Solar’s financial results for the first half of 2022

JA Solar shipped 15.67 GW of cells and modules in the first half, posting 55% of YoY increase from last year’s 10.12 GW. Of the total shipment, 108 MW was for self-consumption. Overseas markets accounted for 67% of its total module shipment.

As shipment volume grew and product prices increased, JA Solar’s revenue came in at RMB 28.47 billion, increasing by 76% from last year’s RMB 16.2 billion. However, its COGS also increased 75%, from last year’s RMB 14 billion to RMB 24.7 billion, due to surging polysilicon prices and delivery fees. Its gross margin saw little change, rising from 13% to 13.2%.

The company’s revenue in the first half stood at RMB 23.2 billion (US$ 3.56 billion), up 43.3% YoY. Its gross margin sat at 15.5%, slightly increased on last year’s 15.1%. CSI Solar, whose business focuses on solar, energy storage, and electricity in China, posted 15.4% of gross margin. Global Energy, which focuses on solar-plus-storage and power plant operation, saw 15.1% of gross margin.

The first half of 2022 saw an increase in global demand for PV, as spurred by national policies promoting energy transition. In Europe, prices surged for electricity and fossil fuel amid Russian-Ukraine conflicts, beefing up the bloc’s demand for renewables. As a result, shipments of all vertically integrated companies to Europe markedly increased from a year before.

Upstream manufacturers enjoyed far greater profits than those in the downstream, as prices advanced faster for polysilicon and wafer than cells and modules in the first half of the year.

Polysilicon production volume was up 53% YoY but still fell short of strong downstream demand. As a result, polysilicon prices kept rising, with major manufacturers, such as Daqo and TBEA, posting more than 50% of gross margin. In the wafer sector, Zhonghuan, Wuxi Shangi Automation, and JYT, yielded 18% to 20% of gross margin, lower than last year’s levels. Cell and module makers saw lower gross margin in the supply chain, but vertical integrated companies managed to keep at least 13% of gross margin.

Overall, the disproportionate supply-demand relationship has yet to be fixed. As prices rise faster in the upstream, downstream sectors can hardly generate high gross margin, despite robust demand driving up shipment volume and total revenue. Given that, manufacturers adjust strategies, hoping to better control production costs through long-term orders or vertical integration.

As countries across the globe raised renewable installation target, demand in the first half beat expectation. In anticipation of stronger demand next year, major manufacturers announced new capacity expansion plans one after another and work on improving profitability in the downstream; they expect rapidly growing demand will drive sales volume. Meanwhile, with new polysilicon capacity coming online continuously, prices-induced cost structure issue is likely to ease. Coupled with strong global demand, most manufacturers are optimistic about market outlook. However, vertically integrated companies are still caught profitability and shipment in the short term, as prices across the supply chain peak in the third quarter.