Governments across the globe have introduced different electricity pricing schemes to boost renewable energy investment. In general, electricity policies are designed for solar and wind energy, but to some degree, it also affects energy storage. In terms of the generation side and the grid side, the most common profit model is electricity arbitrage through peak and frequency regulation, or to sign contracts with the government for grid ancillary services to earn commissions. For the user side, there are various business models, the most common of which are Feed-in Tariffs (FiT), Feed-in Premium (FiP) or Time-of-Use (TOU). Electricity pricing has a direct impact on revenue and willingness of residential energy storage installation of users. The following section will focus on common electricity revenue regulations and their relationship with energy storage.

Renewable Portfolio Standard (RPS) is a regulatory mandate used by government to increase production of energy from renewables. For example, the Philippines requires power transmission and distribution companies to have 1% of renewable energy in their energy mix starting 2020 and increase the share year by year. The country's renewable energy share is expected to reach 35% by 2030, with a two-year grace period before the target is increased to 50% by 2040. The concept is similar to the Renewable Electricity Standard (RES) in the U.S. and the Renewables Obligation (RO) in the U.K., which are usually coupled with Renewable Energy Certificates (RECs) for more flexible implementation. The U.S, the U.K, Italy, and Japan are typical examples using the RPS. As RECs can circulate through trading, prices in some regions can be determined by market supply and demand. However, regional regulations may vary even within the same country. For example, California has set a target of 60% of renewable energy share by 2030, while Massachusetts has set a target of 35% by 2030 and requires electricity suppliers to source 15% of their annual electricity from renewable energy, with an annual increase of 1%.

A feed-in Tariff (FiT) system is a long-term contract signed between the government and an individual or company that allows electricity suppliers to sell excess electricity and earn a certain amount of subsidy. Such contracts usually span for 10 to 20 years. Since it is a long-term guaranteed acquisition by the government, it ensures a stable return on renewable energy. The acquisition amount varies according to the type of renewable energy, technology development, installation cost, scale, quality, location and so on. The subsidy will be higher for energy with higher construction cost, which will be reduced year by year or even withdrawn from the market as technology advances and cost decreases.

The setting of FiT rates is important since it is billed to the public and there is no limit for the budget. Too high a price is likely to result in cost shifting, whereas too low a price is not competitive for investment. For instance, Japan started to promote renewable energy after the Tōhoku earthquake in 2011 and launched the FiT system in 2012. The initial FiT price for solar energy in Japan was 40 yen/kWh, which was so high that the power companies passed the difference on to consumers. As the solar technology advances, its purchase price fell to about 10 yen/kWh in 2022, a 75% reduction in a decade.

The FiT system is ideal for the early development phase of renewable energy, as it reduces investment risks and allows for smoother financing. In addition, since the system also applies to individual investors in addition to large suppliers, many investors started out with a decent price. However, the prices of electricity sold to the grid has gradually declined and become lower than the general price of electricity due to the yearly reduction in the FiT rate. In addition, selling electricity back to the grid results in a partial loss of energy, which makes benefits of self-consumption much higher than that of selling electricity back to the grid. For instance, Germany's solar FiT rate is falling at 6% to 12% per year and is gradually withdrawing from the market, while the electricity price is rising annually. A golden crossover occurred in 2012. This has increased the willingness of self-consumption of households, leading to a rapid rise of residential energy storage from 2015. This suggests the withdrawal of FiT system can help the development of BTM energy storage. 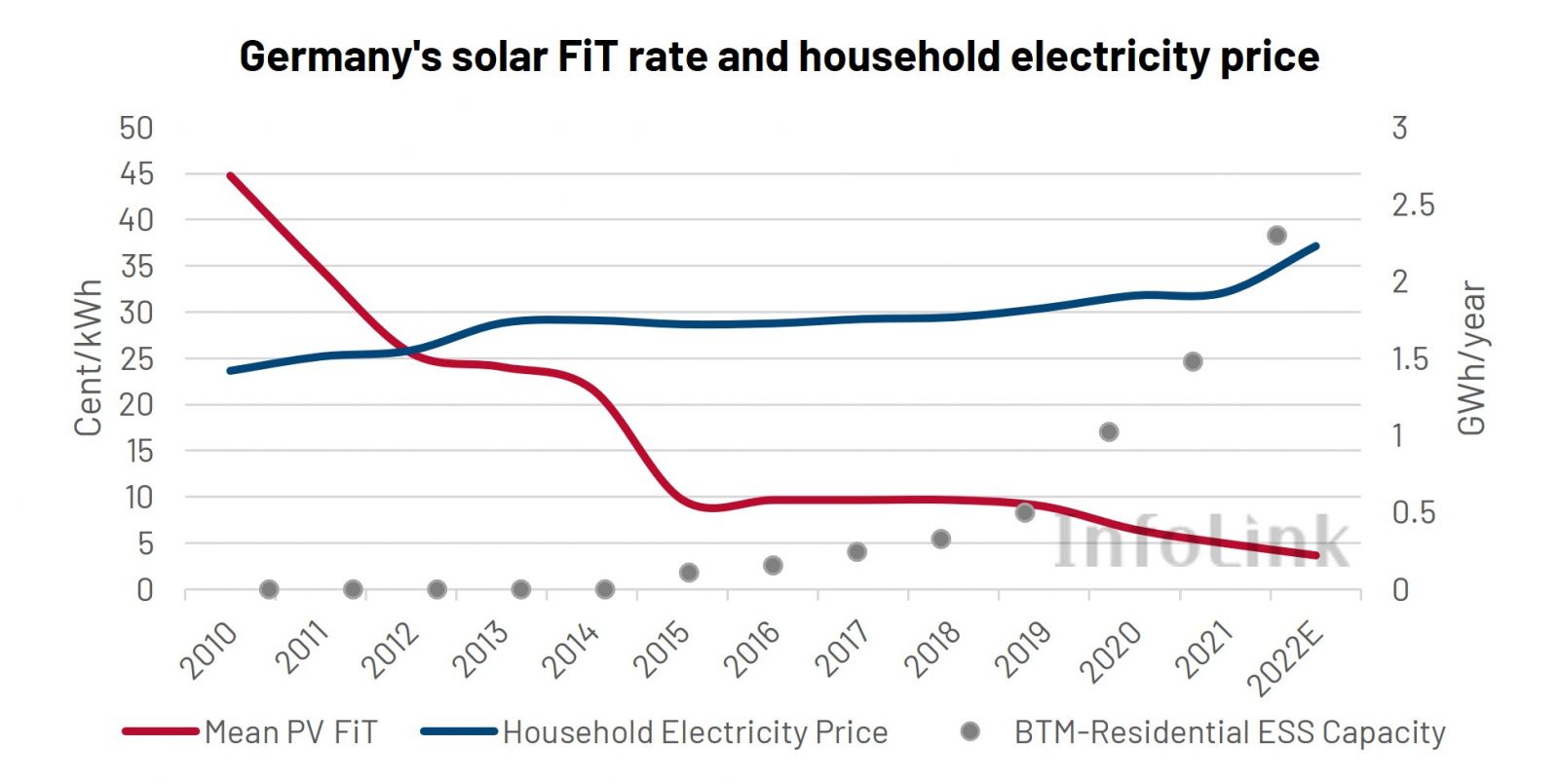 The Feed-in Premium (FiP) system is developed based on the FiT system, which better reflects the current market situation and prices than the FiT. The system allows suppliers to receive an additional premium on top of the market price from the government. The FiP rate is based on market prices from one month to one year ago and can be divided into three types.

The FiP system resolves the financial burden that could caused by FiT on the government. Since the FiP system is available to small-scale investors, some countries which originally adopted FiT have switched to FiP to reduce their financial burden. For instance, Japan has decided to introduce the FiP scheme for solar energy from April 2022, which is expected to gradually step down and withdraw from the market when the industry matures, just like in Spain, which set a cap of 80 euro/MWh and floor at 40 euro/MWh under its FiP system, has announced in March to reduce payments for renewable energy by EUR 1.8 billion. Similar to the FiT, while the premium rate is declining, a Golden Crossover between the premium rate and the general price will occur, making self-consumption more desirable for suppliers as well as favorable for the development of residential energy storage.

This article introduces three electricity pricing methods, including the RPS, FiT and FiP systems. The RPS system can help drive FTM energy storage installations as it will increase the amount of large-scale renewable energy generation significantly. The FiT and FiP are advantageous for early energy development as they apply to both FTM and BTM energy storage and provide long-term profit stability. The FiP mechanism can better reflect market conditions than the FiT and help increase the willingness of households to install energy storage for self-consumption when a Golden Crossover occurs between the premium rate and local electricity prices. Therefore, compared to the RPS system, the FiT and FiP are more favorable for the promotion of BTM energy storage.

PREV Electricity pricing and development of FTM, BTM-storage market: Part 2
sReg, dReg, E-dReg: What are the differences? NEXT
Back