Slicing is one of the core procedures of wafer manufacturing. With outstanding performance in cost reduction, making larger, thinner wafers becomes a common pursuit of the wafer sector. Polysilicon prices stay elevated over recent two years, accelerating the development of thinner wafers. In 2017, a comprehensive substitution of mortar wires with diamond wires indicated a clear way for the advancement and cost reduction of wafer slicing technology.

As installed PV capacity surged over the last two years, polysilicon prices rose monthly on short supply in 2021 and has held above RMB 200/kg for more than a year. InfoLink expects polysilicon prices to stay elevated this year until the fourth quarter, when the shortage eases. Prices will sustain above RMB 200/kg until the third quarter next year when most production expansion projects yield substantial output.

Rising polysilicon prices build up wafer production costs. To bring cost under control, wafer manufacturers ramp up wafer thinning process. From 2018 to 2020, manufacturers spent three years, only to pare down thickness by 5μm. However, since 2021, wafer thickness has been thinned down by 15μm and may reduce further.

Given lofty polysilicon prices, it is the most direct and effective for wafer manufacturers to reduce production costs by mitigating polysilicon consumption. One way of doing that is making thinner wafers, and using thinner diamond wires is another. 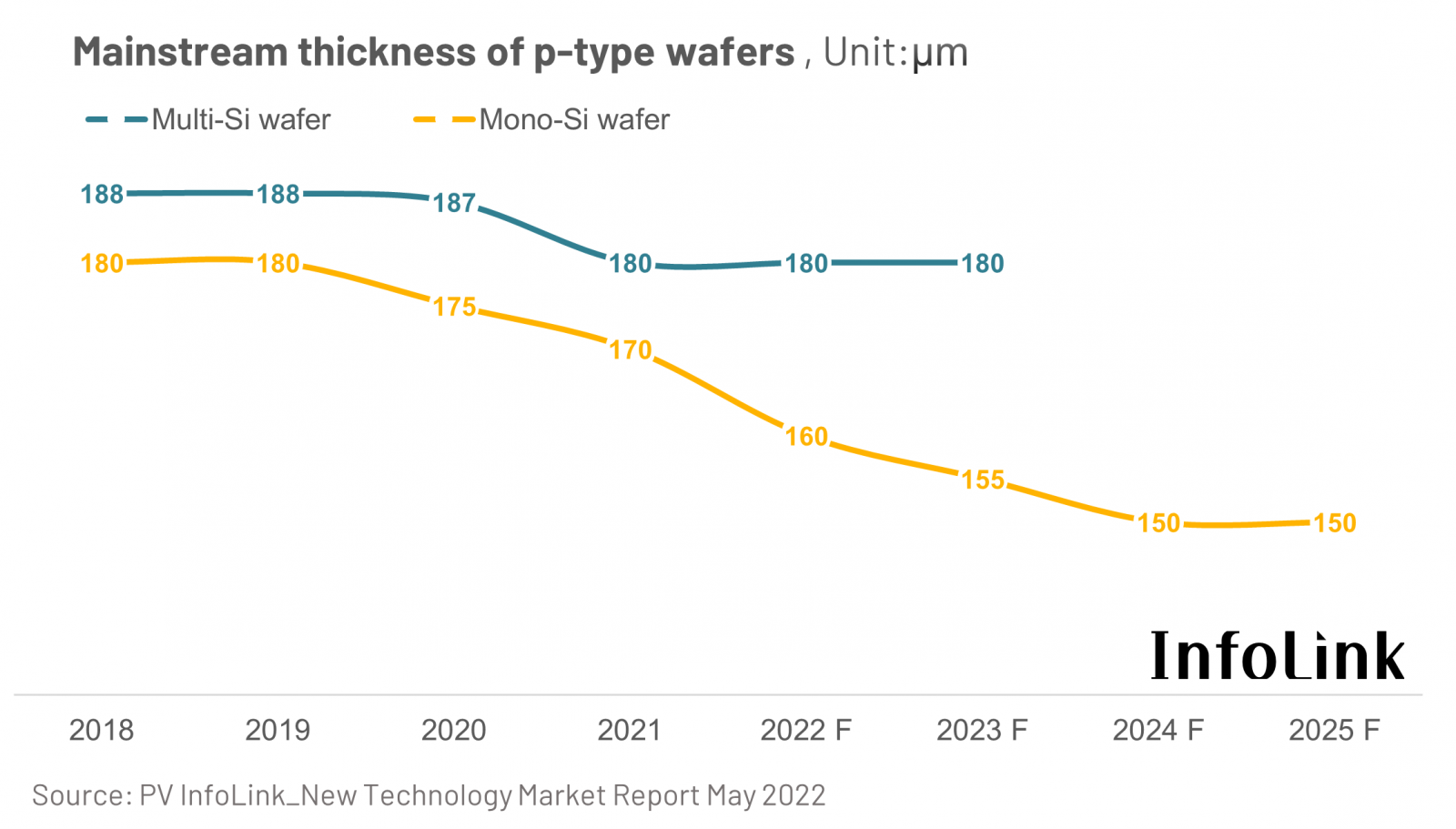 In the first half of 2021, the diameter of diamond wire came in mostly at 42-47μm. The figure now sits at 36-40μm. Some manufacturers even use 32μm tungsten diamond wires as core wires to further reduce polysilicon usage.

InfoLink expects the world to add at least 239 GW of installed PV capacity in 2022. The installation pushes demand for wafers to surge. As a primary wafer BOM, diamond wire is bound to see demand increase evidently. Moreover, the amount of abrasive particle per unit is reduced as diamond wire becomes thinner. According to website of Qingdao Gaoce Technology, the cutting edge rate of a 43-μm electroplated diamond wire is 180±30 grit/mm, and it declines to merely 140±30grit/mm for a 37-μm electroplated diamond wire. The decrease in cutting edge rate caused significant increase in wire consumption per piece.

Rising installed PV capacity and the development of thinner wires contribute to a greater increase in diamond wire demand in 2022 than in 2021. This year, demand for diamond wires may reach 150 million km and exceed 250 million km by 2030.

From 2017 onwards, with the rise of Chinese diamond wire suppliers and the fast progress of import substitution, Chinese manufacturers reclaim nearly an 100% dominance over the diamond wire market. For now, the diamond wire supply chain is in a state of “one superpower, many great powers.” Metro has secured more than 50% of market share for many successive years, whilst Gaoce, Planetec, Yuanshi, and Jiangsu Resource Fusion Diamond Technology all post at least one million km of monthly supply. 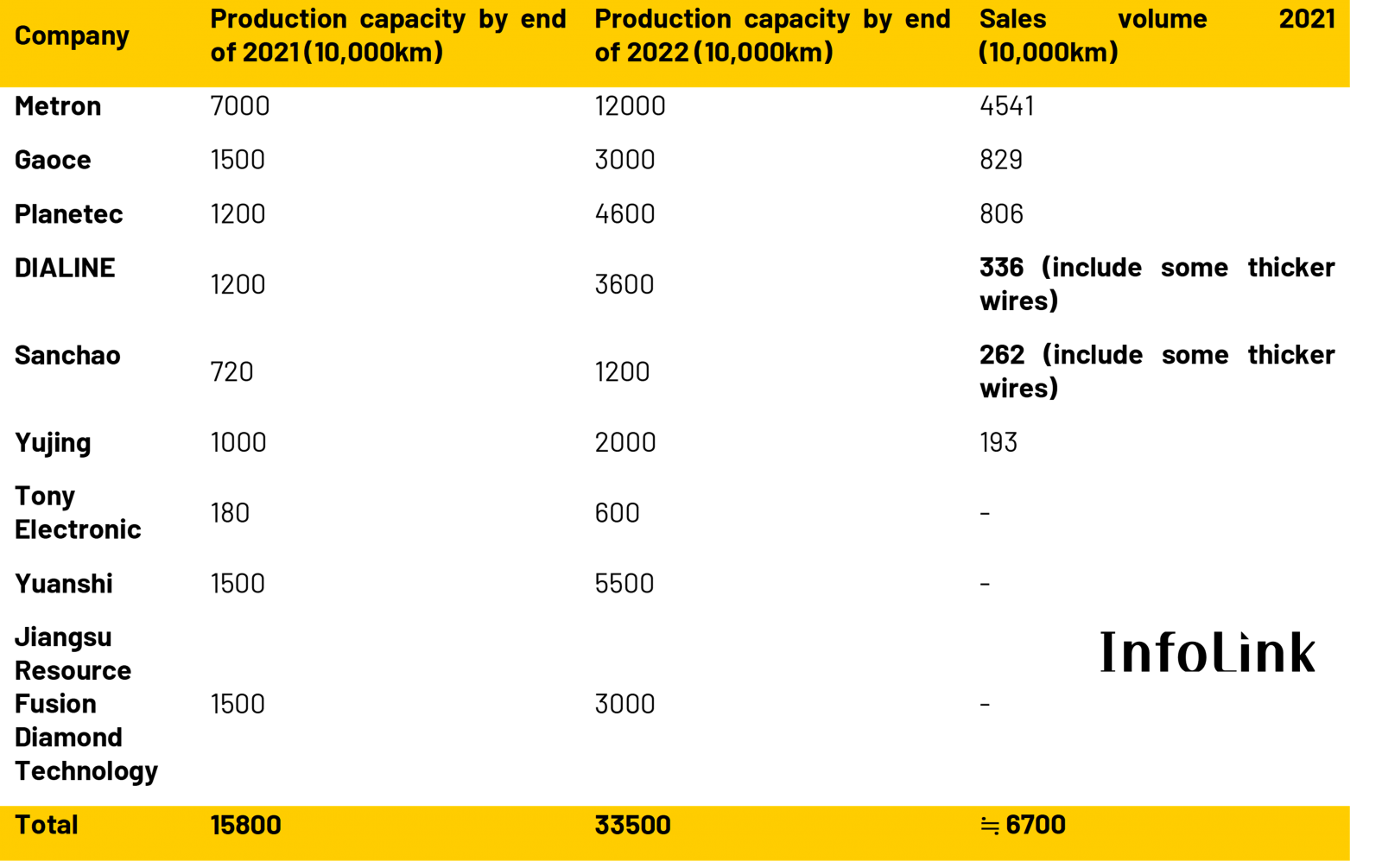 Dimond wires mostly compose of 92c and 100c wires. 35-μm and 36-μm electroplated diamond wires must have at least 5.3N and 5.8N of breaking force, respectively. To ensure enough tensile force and residual tension fluctuation, the gauge of a standard high carbon steel wire is around 35μm. Presently, the gauge of steel wires used to slice wafers is very close to 35um but can hardly be thinned down further.

Granting that both 36-μm regular diamond wires and 30-μm tungsten wires can be used to slice G12 wafers, tungsten diamond wires will still enjoy cost advantage even when prices for which declined to RMB 80/km and polysilicon prices hold above RMB 80/kg. Moreover, there’s bigger room for the thickness of tungsten diamond wires to be reduced further, potentially reaching under 30μm.

The biggest difference between using tungsten and regular diamond wires as core wires is that, on the surface of tungsten wires, there are thick oxide coating and colloidal graphite generated during production. The two must be removed before a tungsten wire is used, to ensure adhesion of the nickel-phosphorus disposition. However, the removal takes more time than the production of diamond wires, and the removal rate is relatively low. Theses technical issues complicates the transition from regular diamond wires to tungsten ones.

Making large-format wafers and diamond wires thinner have been a long-term pursuit of wafer manufacturing, which is accelerated by lofty polysilicon prices. As carbon steel wire reaches its limit in terms of performance and thickness reduction, tungsten wire, with stronger breaking force, is widely recognized as the next-gen material for core wires of diamond wires.

Tungsten diamond wire is better for slicing wafers but attributes little in reducing production costs. Subject to PV tungsten wire supply, carbon steel wires will remain the mainstream material for core wires of diamond wires in the coming one to two years.