Jinko Solar maintained dominance in the module market last year, having shipped 14 GW of modules, a volume that was significantly higher than other manufacturers, according to InfoLink database.

If ranked by exports, the top five largest module manufacturers were rounded out by Jinko, JA Solar, Canadian Solar, Trina, and Risen. Together they exported 33-34 GW of modules from China last year. 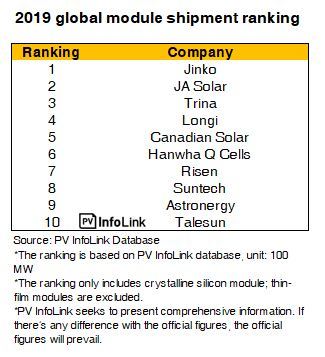 A growth in dominance of global demand by top 10 manufacturers

According to InfoLink database, the shipment by the top ten manufacturers grew slightly from 2018. They delivered nearly 80 GW of modules last year, thereby meeting 65.4% of global demand of 121 GW.

Demand level in China this year is treated conservatively, and the market is expected to experience a surplus during the post-Chinese New Year period to the second quarter of the year; nevertheless, global demand is forecast to grow by 13.4 GW from 2019.

In fact, Tier-1 manufacturers are gaining more competitive edges in terms of distribution channel, brand influence, and product competitiveness, and therefore the module market will be increasingly dominated by few manufacturers. Against this backdrop, the module manufacturer giants are more ambitious this year in terms of shipment volume. It’s expected that the top ten will dominate 70% of global module demand. 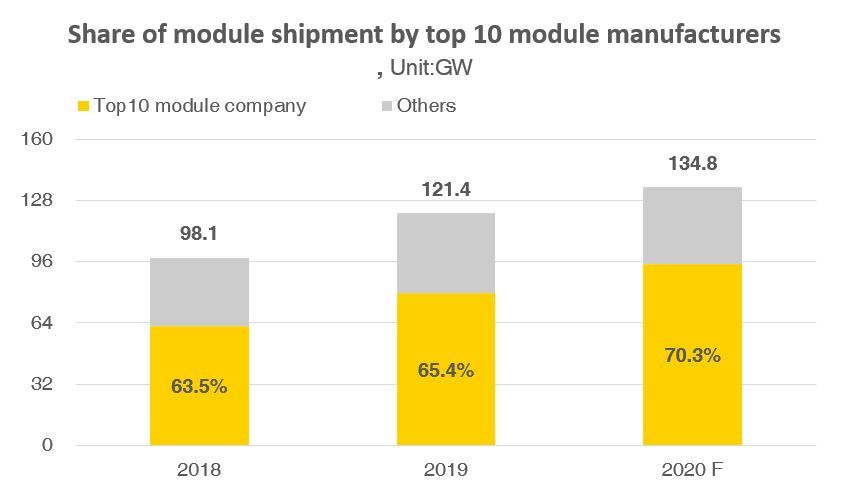 Product elimination amid growing demand for high-efficiency products in 2020

Despite a small difference in total demand between Q1 and Q2, supply will grow continuously as wafer, cell, and module capacity increase each quarter and eventually go into significant surplus in Q2. To keep prices stable, module manufacturers have been improving the power output; price quotes on 400W modules have become common among manufacturers. To achieve 400W, manufacturers need to adopt larger cells and apply half-cut and MBB techniques, and hence a larger number of conventional module lines will be eliminated this year.

As predicted earlier, demand will be weak in the first half of the year and recovers in the second half. With manufacturers actively improving module wattage to grab more orders, the real shipment of special modules has increased significantly. For manufacturers whose share of high-efficiency or special modules is lower in their shipment, they will face more difficulty in receiving new orders this year.