China and the U.S. recall their firm commitment to working together to address the climate crisis at the COP26 climate summit in Glasgow, after years of disputes over trade and politics. The two nations issued the China-US Joint Glasgow Declaration on Enhancing Climate Action in the 2020s at the summit, with an aim to enforce collaboration on the application of renewables in the grid, and strengthen implementation of the Paris Agreement to hold the global average temperature increase to below 2 degrees C.

On Nov. 16, the U.S. Court of International Trade (CIT) re-instated the exclusion of bifacial modules from the Section 201 tariffs and reduced the Section 201 tariff rate from 18% to 15% after it was raised to 18% in Proclamation 10101, effective immediately. This means that imports from the past year under the adjusted 18% tariff are eligible for refunds with interests. According to the Section 201 timeframe, the tariffs are set to expire on February 6, 2022.

Consecutive moves of the U.S., including the anti-circumvention investigation, the Withhold Release Order, the Section 201 tariffs, and bificial exemption, showed gradual relaxation of the restricition imposed on Chinese manufacturers, giving a brief relief to the solar sector. Although the petitions requesting anti-circumvention investigation filed by an anonymous group of solar manufacturers under the banner “American Solar Manufacturers Against Chinese Circumvention (A-SMACC)” was tossed out, A-SMACC may appeal again. Against this backdrop, it’s still risky for Chinese manufacturers to set up manufacturing unit overseas, and it remains difficult to schedule new capacity commissioning time.

The FAQs regarding the Xinjiang Uyghur Autonomous Region Withhold Release Order (WRO) updated on Nov. 10 showed opportunity for PV importers to the U.S. However, the U.S. Customs and Border Protection (CBP) hasn’t made any decision. Developments of manufacturers whose solar shipments are detained by the U.S. customs should be monitored; it is reportedly that detained products of large manufacturers have yet to be sent back thus far. With potential risk of detention of products, utilization rates in Southeast Asia have remained low so far despite relaxed Section 201 tariffs and WRO. Most large manufacturers in the region are running cell and modules lines at a capacity utilization of below 50%.

Estimated export costs to the U.S.

With bifacial exemption back in place, Southeast Asia-based manufacturers can secure around 18% of profits. Monofacial modules can generate around 8% of profit after Section 201 tariffs. Despite significant reduction in anti-dumping duties and the Section 201 tariffs, Chinese modules are still subject to the Section 301 tariffs and countervailing duty at exports to the U.S., and thus incur higher costs than capacity in Southeast Asia. Slim profits make it unappealing for Chinese manufactures to export modules to the U.S. With the current price level, it’s profitable for manufacturers to set up facilities in the U.S. However, considering high investment and potential competition with low-cost modules that are excluded from tariffs in Southeast Asia, manufacturers may face higher risks in terms of returns. Future developments should be monitored continuously, and it remains to be seen whether the Section 201 tariffs will be extended. 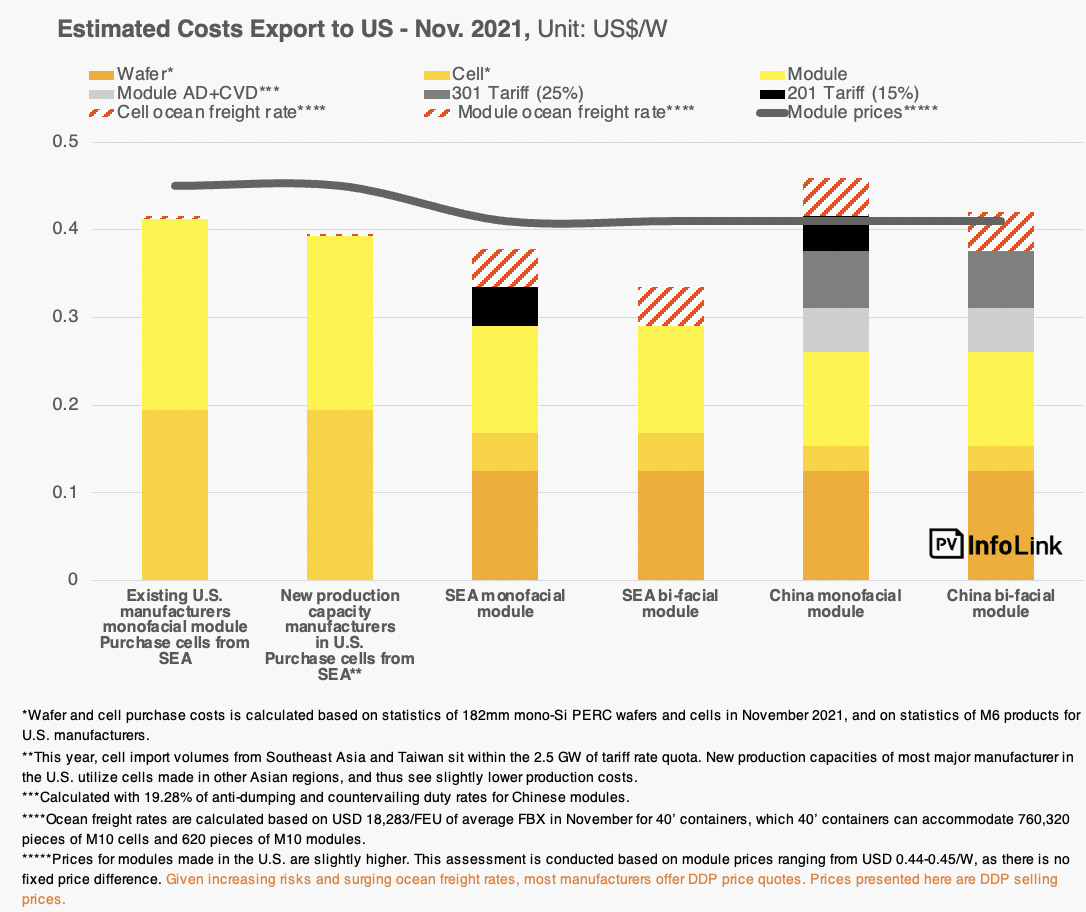 From the table above, if the Section 201 tariffs end next year with no extension, prices for the U.S. may decline as the expiry of the tariffs. Under this scenario, profitability will shrink for capacity in China and US manufacturers. Manufacturing modules in Southeast Asia will be the best option. 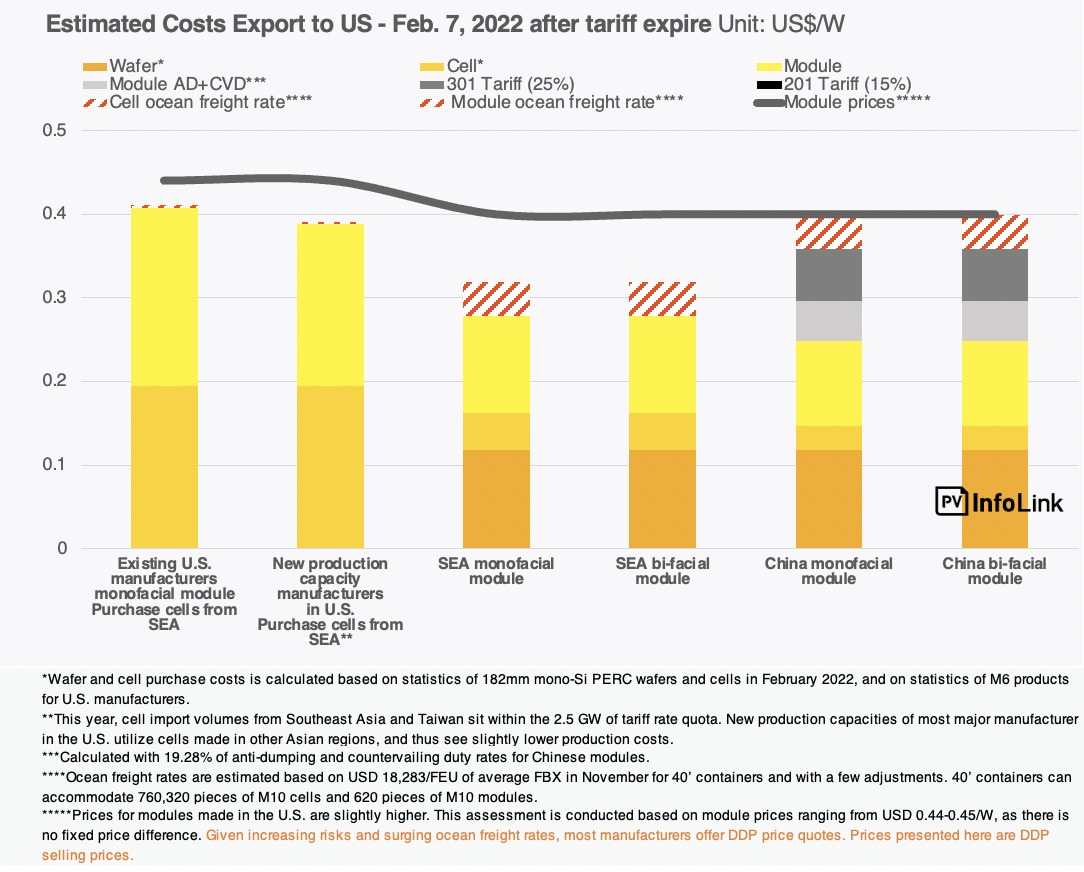 Among these developments, the WRO imposed by the CBP causes the biggest impact on PV importers to the U.S. As it takes longer to ship products to the U.S., any further changes in policy could cause uncontrollable losses in the voyage; there’s a traceability mechanism even after products arrive at port. Therefore, manufacturers exporting products to the U.S. now avoid large shipments, and control risks by shipping in small batches.

Overall, reduction of Section 201 tariffs to 15%, return of bifacial exemption, and eligibility for refunds brought good news to the PV sector. However, it’s still difficult to drive up supply and demamd in the U.S. as long as WRO remains in place.

The FAQ on Xinjiang updated on Nov. 10 showed sign of relaxation. Modules arriving the U.S. are required to provide information on source of its materials. Given it’s difficult for polysilicon to provide such documents, manufacturers using materials from China need to sign the relevant declaration and other documents such as remittance slip. The FAQ also clearly indicates that the use of overseas polysilicon and material sources outside of Xinjiang is less risky. In light of this, Tier-1 manufacturers will try to prepare the documents no matter where the material is sourced from; they will also try to use polysilicon from regions outside of China to mitigate risks.

Capacities outside of Southeast Asia, such as Japan, South Korea, China, and other regions, are also subject to WRO. Moreover, with petitions requesting anti-circumvention investigation rejected, Southeast Asia, where manufacturing costs have reached similar level with that in China, enjoys competitive advantages. Therefore, only by optimizing products and sales channels can manufacturers differentiate themselves.

Calculations above also show that modules in Southeast Asia have higher profitability. Considering potential risks, buyers in the U.S. require their shipments from Southeast Asia to be done by delivery duty paid (DDP). As safe harbor modules are running out, administration procedure for exporting to the U.S. is complex, and the shipping time is longer, prices in the U.S. market have increased in response to module short supply. At present, the FOB price of good exported by the Chinese manufacturers into the U.S. market excluding tax and freight rate is about USD 0.31-0.35/W, while local distribution prices of USD 0.4-0.45/W have also been heard.

PREV Polysilicon outlook for 2022
Solar cell and module: The big picture outlook for prices and demand NEXT
Back