Global shipments of cells and modules over the first half this year offer some insights into how the PV market is being consolidated toward top producers.

The rise of larger formats

The increases in wafer sizes is a long-running trend in the solar industry. And the rise of M6 (166mm) wafers has marked a new milestone, evidenced by a significant growth of China’s exports of modules featuring M6 wafers in the January-May 2020 period, according to PV InfoLink’s database. While nearly 60%, or 11.7 GW of the mono PERC modules exported during this period were based on G1 (158.75 mm) wafers, cumulative exports of modules assembled with M6 cells had been growing from 0.8 GW in Q1 and reached around 2.8 GW at the end of Q2. Clearly, G1 and M6 may remain the mainstream module formats until the end of this year.

Notably, the share of modules based on wafers measuring 156.75 mm in total exports plunged from 90% in Q1 last year to an estimated 20% at the end of this year because of growing demand for high module wattage.

However, the market saw two alliances respectively advocate M10 (182 mm) and G12 (210 mm) as the standard wafer format recently, accelerating the shift from M6 to the next-generation size. But using larger wafers means an increase in module area. The existing furnaces can only produce glass up to 1.1 m in dimensions and it will take a while for glass suppliers to catch up with the larger format trend. In addition, applications of auxiliary materials, product delivery, and installation remain issues to solve for large-format modules.

Rated by shipment volumes, the top ten largest module producers, namely Jinko Solar, Longi, Trina, JA Solar, Canadian Solar, Hanwha Q Cells, Risen, First Solar, Chint (Astronergy), and Suntech, became more dominant than ever. They are highly cost-competitive, adopts large sizes in a prompt manner, and have stable avenues for overseas shipping. These strengths allowed the top-ten to increase their dominance over the module market amid COVID-19 pandemic, with market share growing from an average of 60%-70% in the previous year’s to around 85% in the first half this year. 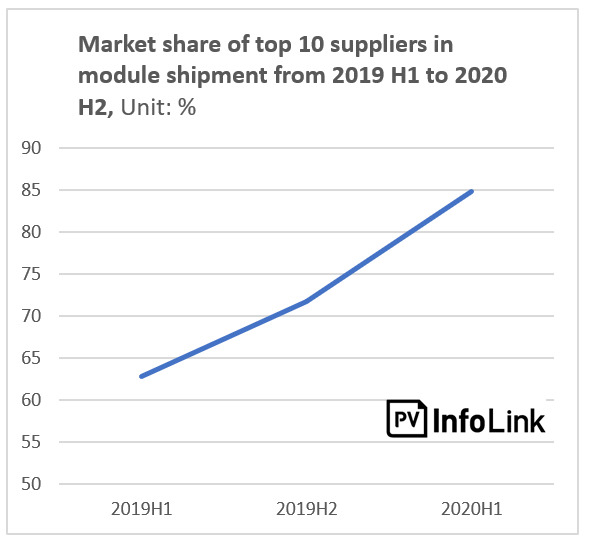 Like the module sector, the cell sector sees the growing dominance of Tier-1 manufacturers. The five largest cell manufacturers—Tongwei, Aiko, Runergy, ShanXi Lu’An, and Solar Space—on the whole achieved marked growth in the shipment over the first half of this year, compared to the same period in the previous year.

This indicates that they increasingly nudge out Tier-2 makers by leveraging their cost and product competitiveness, as well as new production lines that are compatible with large wafers. As the COVID-19 rages across overseas markets, sales of Chinese manufacturers with a strong distribution strategy witnessed marked growth. Aiko Solar’s shipment surged by 83% from the first half of 2019. 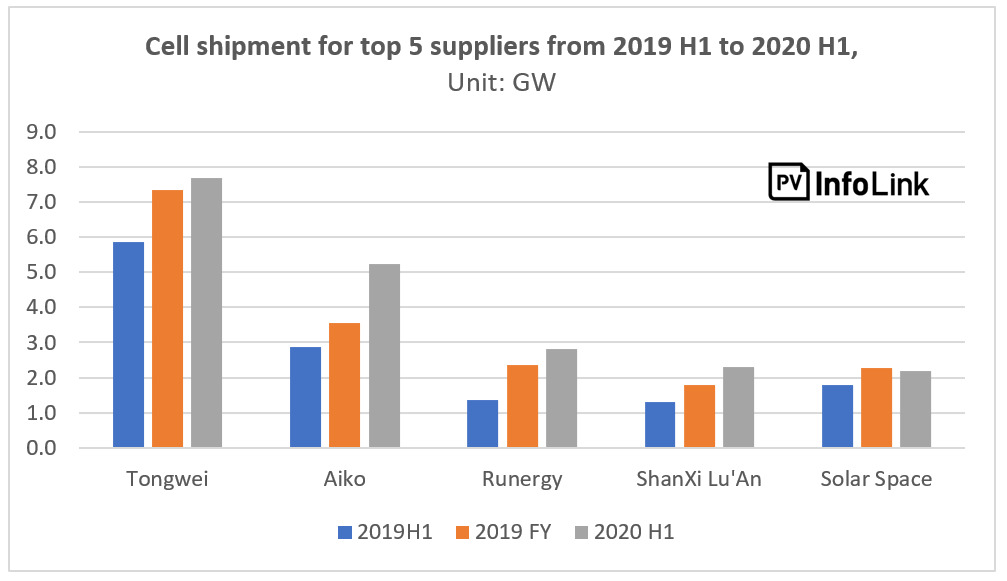