Impacts of U.S.’ ban on goods from China’s Xinjiang

The U.S. House of Representatives has approved legislation that would ban imports of certain goods from China’s Xinjiang region last September. Earlier in January, the Trump administration announced a ban on imports of all cotton and tomatoes from Xinjiang, which accounts 20% of world cotton supply. Xinjiang is also a major producer of fossil fuel and industrial materials such as polysilicon, an important material for manufacturing solar panels.

The U.S. recently began investigation on solar products made in Xinjiang. This March, Republican and Democrat senators sent a letter asking the Solar Energy Industries Association (SEIA) for information on “the extent to which the U.S. solar supply chain is currently dependent” on the Chinese PV supply chain and measures it has taken to ensure that solar products sourced from Xinjiang are not made with forced labor. Recently, Senate Republicans even introduced legislation calling for a ban on all China-made solar products.

The bills will be sent to the President if they are passed by the Congress. Given the recent trade tension, the solar industry believes that the sanctions on solar products from Xinjiang will take effect soon. In anticipation of the import ban, PV manufacturers in China have taken actions in response, including establishing a mechanism that traces the country of origin for raw materials, source polysilicon from non-Xinjiang regions for some facilities, and select provinces outside of Xinjiang for capacity expansion.

Overview of production capacity in Xingjiang

Xinjiang is a major producer of polysilicon. InfoLink made forecast for the worst case scenario for the PV supply chain in Xinjiang.

Polysilicon：The total polysilicon capacity worldwide is estimated to sit at 710,000 MT by the end of 2021, while China alone will see 613,000 MT. Xinjiang, with around 297,000 MT, accounts for 48% of total capacity in China and 42% globally. Polysilicon manufacturers based in Xinjiang include Daqo New Energy, TBEA, East Hope and GCL Silicon.

Ingot：Jinko has 8 GW of mono ingot capacity in Xinjiang

The U.S. Customs and Border Protection (CBP) has not barred imports of solar products made with materials sourced from Xinjiang, but if the sanctions on goods from Xinjiang are implemented in May, the U.S. may begin to bar modules made of polysilicon from Xinjiang between September and October, taking into account the 90-120 days of grace period. Under the scenario that no grace period is given, exports of modules to the U.S. during May to June might be disrupted.

Given the current international situation, it’s likely that Europe will follow suit. Other countries such as Canada and Mexico have signed agreements on labor rights with the U.S., while Australia and New Zealand raised concerns about the Xinjiang issue. In light of this, InfoLink calculates the estimates for US demand as well as supply and demand of non-Xinjiang polysilicon under three scenarios: the U.S. plus Europe, Canada, Mexico, Australia, and New Zealand. 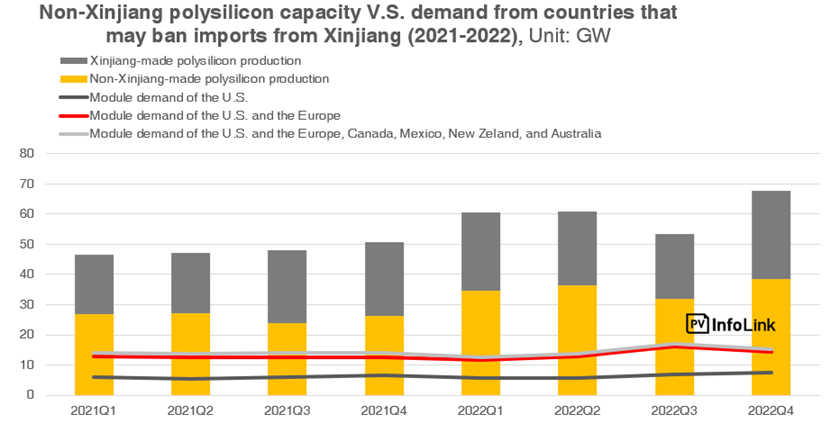 Xinjiang accounts for 45% of global polysilicon production. The U.S. and Europe respectively represents 14-15% and 17-19% of polysilicon demand, while the U.S., Europe, Canada, Mexico, Australia and New Zealand together occupy 36% of demand. This means that polysilicon sourced from regions outside of Xinjiang is sufficient even in the worst case scenario.

Since the end of last year, vertically integrated companies, US companies, and manufacturers that supply modules to the U.S. market have started to negotiate supply deals of wafers made of polysilicon from regions out of Xinjiang, in case of some countries ban imports of modules related to forced labor. Moreover, wafer and vertically integrated companies now source polysilicon from non-Xinjiang regions to avoid the complicated procedure of tracing the country of origin when exporting modules to the U.S.

Given modules exporting to the U.S. and Europe may use polysilicon from non-Xinjiang regions in the future, Chinese polysilicon manufactures opt to set up new production lines in provinces outside of Xinjiang, such as Sichuan, Inner Mongolia, and Yunnan. Tongwei’s unit of Yongxiang will bring new capacity online in Sichuan and Yunnan by the end of the year, while TBEA has capacity expansion plan for its Baotou-based facility next year. Against this backdrop, Chinese polysilicon in non-Xinjiang regions is forecast to grow by more than 50%. Once the polysilicon shortage eases in mid to late 2022, polysilicon in Xinjiang will see serious surplus.

From a quarterly supply perspective, polysilicon in non-Xinjiang regions may be sufficient to supply countries that may ban goods from Xinjiang even in the third quarter of 2022, when the high season falls. Having said that, wafer manufacturers may hoard polysilicon again due to significantly higher volume of capacity than polysilicon.

PREV US sanctions over Xinjiang: Updates
Trump mulls raising tariffs on solar imports NEXT
Back