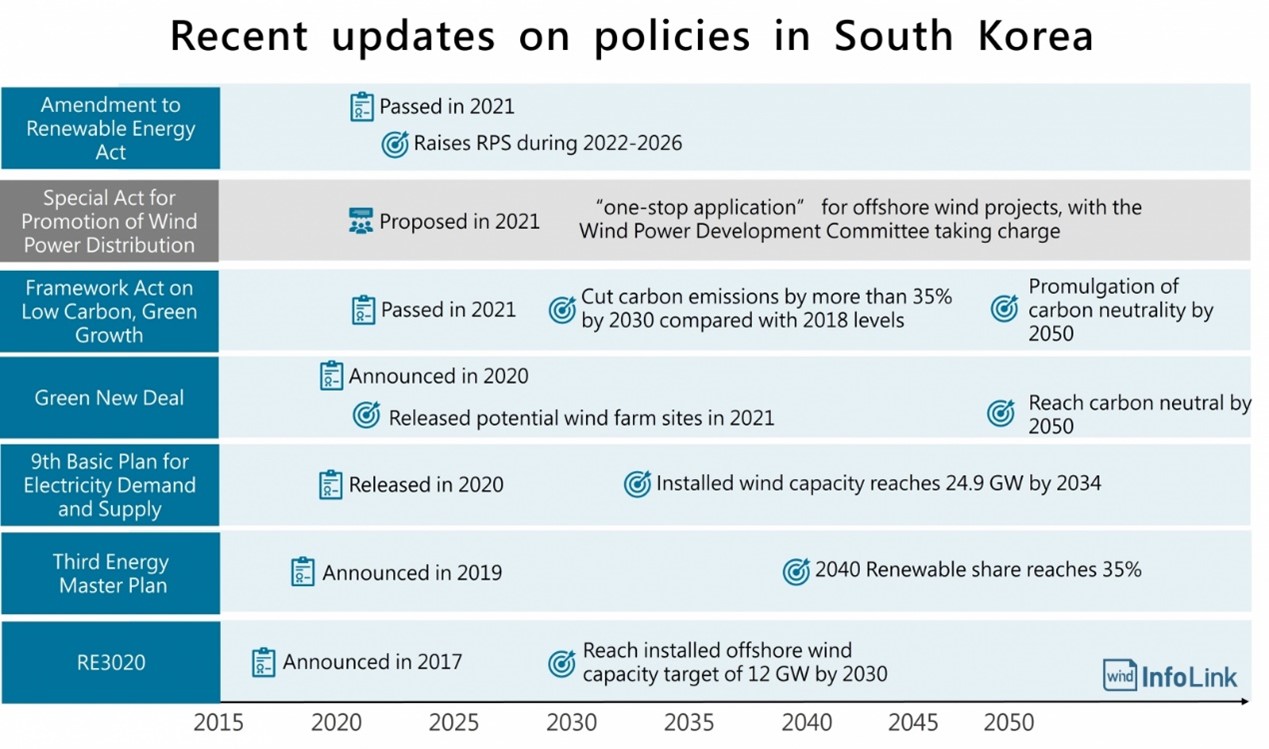 South Korea passed two crucial acts for the renewable sector this year. The first one is the amendment to the Renewable Energy Act, in which the government raised RPS target. Originally, power generators with more than 500 MW of capacity will be required to have 10% of power sully come from renewables from 2022 onward.

The amendment raised that requirement to 12.5% and set a new target for 2023-2026 to 25.0% by 2026. This is not only to accelerate the progress of renewables in South Korea, but also to lift REC prices, as excess supply resulted in price plunge, sending some smaller-scaled PV stations into bankruptcy, undermining the South Korean renewable industry. 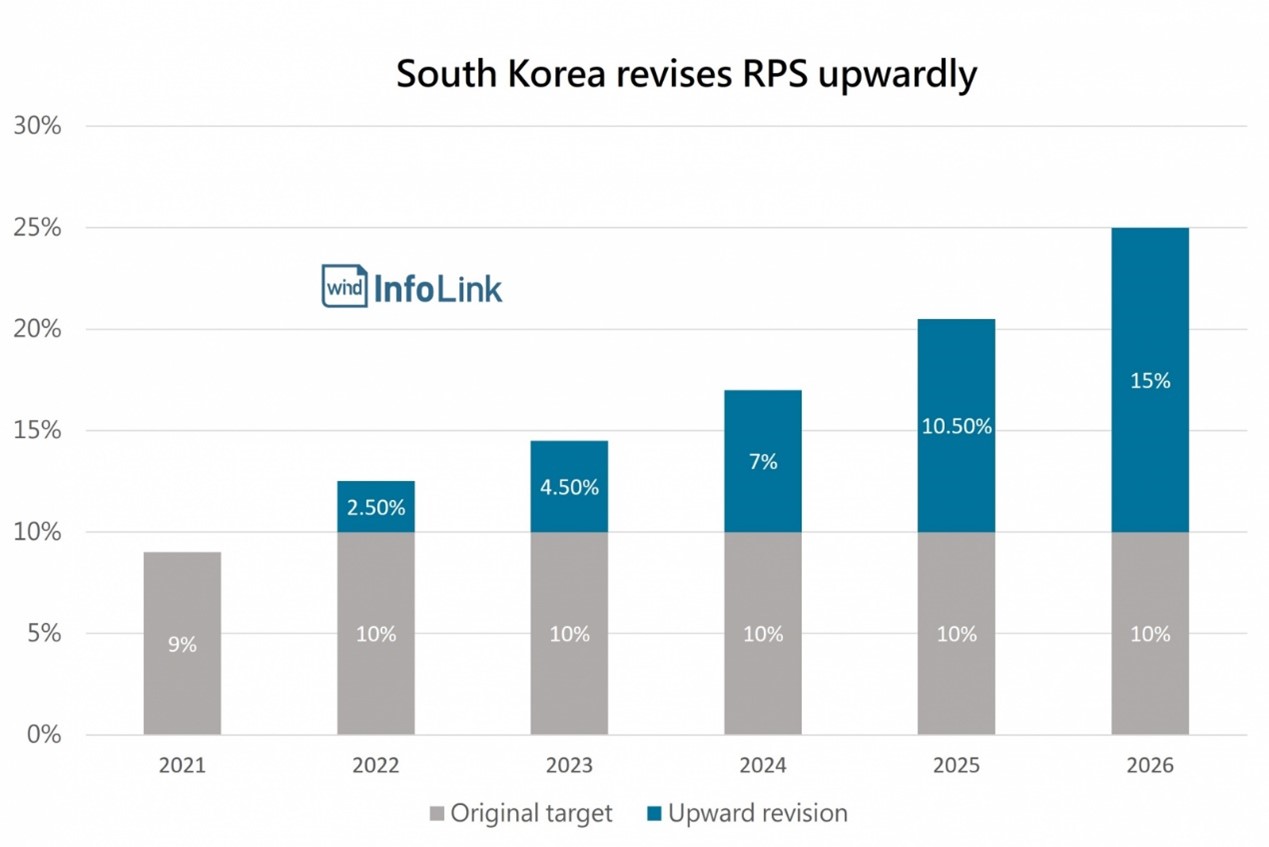 The second one is the Framework Act on Low Carbon, Green Growth, which was passed in August 2021. The act makes South Korea the 14th country that legally ensured net zero target. The act mandates the South Korean government reduce carbon emission from the 2018 levels by at least 35%, which was later revised to 40% by President Moon Jae-in in October. Accordingly, renewables will see installed capacity target increase, with that of offshore wind power by 2030 rising from current 12 GW to 18-20 GW, as InfoLink projected.

Given that, legislators of the Democratic Party of Korea proposed Special Act for Promotion of Wind Power Distribution in May 2021, authorizing the establishment of Wind Power Development Committee, aiming to replace the tedious procedures with one-stop application mechanism, expectedly shortening the entire process to three to five years.

Each MWh of electricity generated by renewable energy suppliers or independent power producers will be awarded with one unit of REC, after being verified by the Korea Energy Agency and the New & Renewable Energy Center (KNREC). Renewables produced differently enjoy different weightage. For instance, weightages for offshore wind electricity vary with factors such as how far it is off the shore and weather it is equipped with energy storage systems. Additionally, RECs are available on the open market or for long-term contracts, allowing power producers failed to meet the RPS target to purchase RECs in conform to policy requirements. 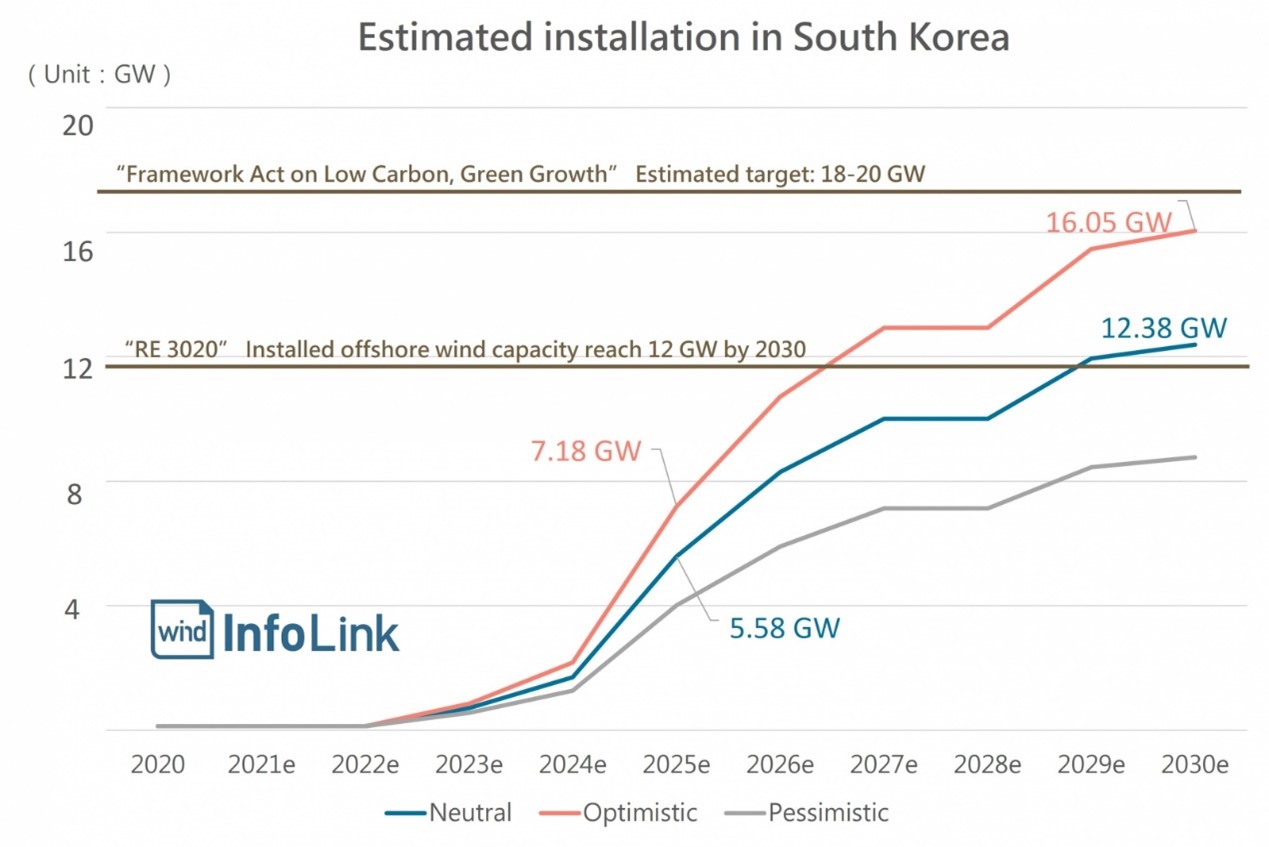 South Korea is expected to see and outburst in offshore wind deployment in 2025, with at least five wind farms with 2 GW of total capacity being connected to the grid, such as wind farms in Saemangeum (500 MW) and Incheon (600 MW). Besides wind farms with specific year of commercial operation, InfoLink believes the existing 1.8 GW of capacity in pipeline may also complete construction and connect to the grid by 2025. Based on existing wind farms, South Korea will achieve 12 GW of its original target by 2030.

However, given current amount of wind farms and the time application process can take, South Korea will not fulfill the 18-20 GW offshore wind capacity target, as was raised in accordance with the “Framework Act on Low Carbon, Green Growth,” even under an optimistic scenario. Only by passing the Special Act for Promotion of Wind Power Distribution and realizes the one-stop application can the country see installed capacity increase.

Doosan Heavy Industries announced its KRW 1.4 trillion total investment in 2.4 GW of offshore wind capacity in this region. Doosan will be in charge with wind farm development, turbine manufacturing and maintenance. It signed “North Jeolla Province Offshore Wind Business Selection Agreement,” which helps it acquire administrative supports from the North Jeolla authorities, who promised to use Doosan-made turbines priorly.

Doosan Heavy Industries is a subsidiary of Doosan Group involving in vessel component, machine tool, and automobile engine manufacturing. The company owns nuclear and coal-fired power plants and 5.5 MW of turbine production capacity, and expects to bring 8 GW of offshore wind turbines into commercial production by 2022.

The wind farm in Sinan County is selected by the MOTIE as a government-led project. The South Korean government will allocate KRW 2.25 billion for preliminary inspections. With KRW 48.5 trillion of total investment and 8.2 GW of total capacity, which translates to generation of six nuclear power plants, the project will be implemented in three phases as shown below: The project completed technical capacity assessment in September 2021, talked with local self-governing bodies and businesses, shedding light on the status quo, the advantages and disadvantages of each party, and based on which, devised wind farm developing plans. Additionally, Jeolla Province Governor would like to integrate wind energy with hydrogen technology to build a green hydrogen industry.

In June 2021, Jeolla Province and Vestas signed a plant construction agreement. With geographically excellent location, the plant will be able to supply for wind farms in the entire province after construction, and thus attracted Vestas to invest.

Ulsan and the southeastern region

Ulsan has firm foundation in ship building and marine industry. Doubled with geographical proximity with South Korea’s industrial hub, the city is an ideal spot, and thus the center of floating wind development. Ulsan expects to invest KRW 3.6 trillion to build 6 GW, half of the country’s 2030 offshore wind capacity, of turbines. The construction will be completed by 2030. The plan is to transform oil gas platforms originally retiring in 2022 into floating wind foundations.

On the other hand, the GIG and TotalEnergies-led floating wind farm passed the MOTIE inspection in July 2021 and acquire the electricity business license (EBL). The construction will kick start with 504 MW in Phase 1 in 2024.

However, things are not going smoothly for every wind farm. Donghae I, led by Equinor, Korea Gas Corporation, and Korea East-West Power, was opposed by the fishery community and failed to earn that EBL in October 2021. The fishery community protested vehemently, denouncing the impotent environmental impact assessment as a negligence of fishing rights and rights of residents, as Donghae I takes up half of economic zone off the shore of Ulsan, threatening fishing areas.

As of 2020, Jeju has accumulated 295 MW of installed wind turbine capacity, both onshore and offshore. The local government is promoting Jeju Project, hoping to make the province a “carbon free island” by 2030.  The 104.5 MW of wind farm, led by Jeju Energy Corporation, has been delayed for a year due to contentious substation location. The project resumed this October, as consensus was finally met with local residents.

Incheon has chosen two wind farms to be renewable energy designated areas, for which applications were handed in in October 2021. The two wind farms are respectively led by Korea South-East Power and  Ørsted, each with 640 MW and 1,600 MW of capacity and expects to initiate construction in 2023 and 2024. The Incheon government is negotiating and holding meeting to raise residents’ acceptance and pass the renewable energy designated area inspection.

However, considering current lengthy administrative procedures, South Korea may not be able to deliver on the 18-20 GW of target by 2030. Doubts surrounding offshore wind industry still exist, such as the averagely lower wind speed on pilot wind farms, less-than-expected capacity factors, excess offshore wind subsidy, and rising electric prices.  All of these require further communications from the government.

Moreover, the one-stop application mechanism accelerates wind farm development, but in the meantime, intensifies protests. Disputes will step up, if developers overlook stakeholders’ rights and stop negotiating with local residents and the fishery community. As in Taiwan, the outraged fishermen may interfere maritime construction, posing risks to wind farm developments and dangers to engineering safety, damaging the image of South Korean offshore wind industry.