The PV supply chain has been having a difficult time since the COVID-19 outbreak began. Auctions and projects have been postponed in many non-Chinese markets, with one module order after another postponed for delivery or even canceled since the end of March. As module demand continues to shrink worldwide, PV InfoLink has revised down its forecast of the global module demand to 112.5 GW from 129.1 GW in the moderate scenario.

Small producers having a harder time

Despite stagnant demand, top-ranked manufacturers can still hold the lion’s share of the market. Many module giants retain their shipment targets for this year, apparently convinced that they would be first in the line to serve the limited demand. This will put smaller producers at a heightened risk of elimination and lead to fierce price competition during Q2–Q3.

Since the coronavirus broke out, mono-Si wafer makers have been going nearly all-out. This move seems counterinitiative given that end-market demand would hardly pick up. In fact, slowing down wafer production can increase non-silicon production costs. Moreover, mono-Si wafers guarantee higher profit margins for Tier-1 manufacturers like Longi. This largely explains why manufacturers of such wafers are building new production lines and they may continue to do so as long as they do not hit their break-even points.

This has led to oversupply of mono-Si wafer. Consequently, Tier-1 maker Longi lowered its list prices for G1 and M6 mono-Si wafers twice, both in April and May. Mono-Si wafer prices in the market plunged by 23% at the end of May, compared to their levels in late March, before which they remained constant most of the time. The prices could be further down to an average of RMB 2.42/piece for G1 and 2.52/piece for M6 at the end of Q2, according to PV InfoLink’s conservative prediction.

Longi’s successive price cuts have pushed smaller production lines to the edge of the break-even point. Clearly, Longi’s unrivalled cost advantage may cause small producers to reduce production or slow capacity expansion due to low profit margin. Longi would continue cutting prices to increase production, thereby enlarging its economies of scale before demand picks up. Top-tier producers to stay dominant as ever

While overseas module demand remains weak, it would recover if the COVID-19 pandemic starts to ease off in the second half of this year, allowing governments around the world to relax their coronavirus restrictions and solar projects that are put on hold to resume construction, PV InfoLink predicts.

But because quite a few solar projects have been postponed until the first half of next year, global module demand will not peak until Q4. However, demand level is projected to be consistent with its level in the same quarter last year at best. In this case, industry leaders that have been ramping up capacity will see increasing market share if they maintain shipment targets on lower demand. This means that the market will become more concentrated. 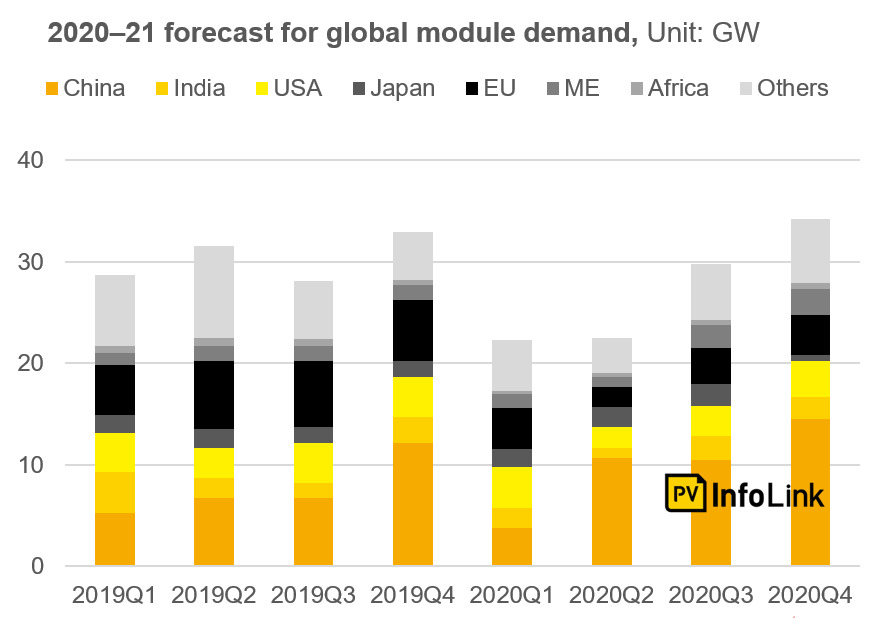 PREV China is upping the n-type game, despite uncertain prospects
Chinese n-type equipment suppliers ramp up innovation NEXT
Back