Following the comparison and contrast of suction bucket jacket (SBJ) and other types of foundations, this article focuses on Borkum Riffgrund 1, the first wind farm employing SBJ, examining the historical and geographical context of the attempt and development afterwards.

Borkum Riffgrund 1 is the first SBJ wind farm, located 38 km off the shore of Northern Germany, where the seabed is composed of dense and medium dense sandy soil, and siltier sand three to six meter under the sea. Such condition is ideal for experimenting the SBJ technology. Borkum Riffgrund 1 spans a 36 km2 area, consisting of 78 4-MW wind turbines from Siemens Gamesa, among which one deploys SBJ, while the rest use monopile underwater foundations. Co-designed by Danish engineering consultancy company, Ramboll, and the Norwegian Geotechnical Institution (NGI), the SBJ underwater foundation was accredited by the DNV to work 20-60m of optimal water depth. It weighs 850 MT, including three caissons welded on the jackets for easier transportation and installation.

The procedures of installing an SBJ is as followed:

After the underwater foundation is placed on the seabed, pumps in the three caissons start to pump out water in the caissons to reduce pressures within. The weight and differential pressure of a caisson insert the pipe to the seabed. A foundation can be firmly installed just 8m under the sea. Once caissons are in position, pumps will be recycled, and cement grouted between caissons and the seabed. For more details, refer to the last article.

GeoSea, subsidiary of Belgian company, DEME, was in charge of transportation and installation. SPT Offshore dealt with water-pumping for caissons. The two companies jointly put together the first SBJ underwater foundation of the world.

The world’s first SBJ is equipped with various sensors designed by the NGI, including strain gauge, temperature and pressure sensors, inclinometer, etc. Since the installation in 2014, these sensors have been collecting data, documenting changes of underwater foundation structure and soil condition during installation and operation, and thus help improve the SBJ technology. 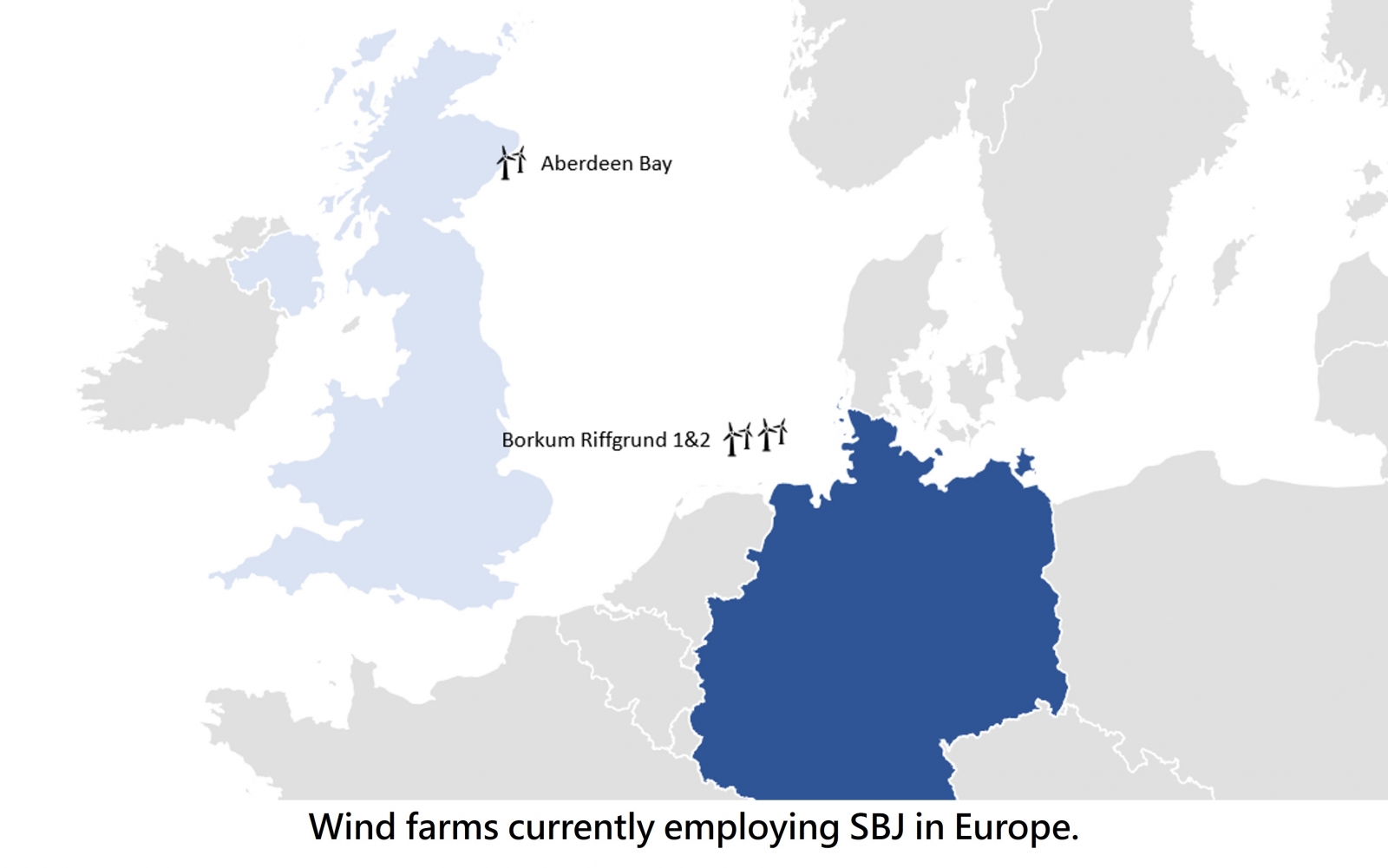 For now, it is still uncertain whether soils of Taiwan is optimal for SBJ application. Off the shore of Changhua County, wpd bids for Datian abd Youde wind farms, saying soil condition there is not fitted for SBJ, disagreeing with Ørsted’s point of view. Environmental Impact Assessment Committee expect more detailed pros and cons analysis from wpd, to further clarify the feasibility of SBJ technology in Taiwan.