The past three quarters have been bumpy for solar market

The first three quarters of 2020 have been quite eventful for the solar market. Yet, in the year ahead, it looks set to fare relatively well overall.

Solar as a safe bet against COVID-19

In Q1, the COVID-19 pandemic dragged down the U.S. residential solar market. Around 19% of ongoing projects across the country were canceled and 53% postponed as of March since the social-distancing policy was introduced, according to the Solar Energy Industries Association. The impact was felt most by small PV manufacturers. Luminalt, a California-based producer, had all their orders canceled since the pandemic.

While the U.S. solar community are grappling with the economic impact of COVID-19, they are, on the whole, optimistic that the solar industry will do a good job of stimulating American economy in the post-corona world. This optimism is bolstered by the federal government’s launch of the 1-billion-dollar, 690 MW “Gemini” project in Nevada in May. Investors are also positive about solar’s prospects, with the Invesco Solar ETF (TAN) having gone up 3.8% as of May.

Meanwhile, China’s module exports increased steadily inQ1, when the corona was at its peak. The exports modules stood at 8.1 GW in March—more than double each of the previous two months. This marked growth pointed to logistic and transportation services returning to normal, manufacturers ramping up production, and orders delayed from February being delivered. Moreover, the total Chinese module exports in Q1 were consistent with the same period last year, sitting at around 16 GW. At the end of the day, the pandemic had a negligible impact on the Chinese module shipment.

Global module demand to recover from a turbulent 2020

Things made an abrupt turn for the solar supply chain in Q3, during which polysilicon was running low. The polysilicon shortage—due in large part to the explosion of GCL Silicon’s factory in Xinjiang in July and Yongxiang having shut down its flood-hit factory in Leshan city in August—sent prices soaring across the supply chain. Hit by growing polysilicon costs, Tier-1 wafer maker Longi raised its prices for mono-Si wafers substantially between late July and mid-August: from RMB 2.73 to RMB 3.25/piece for M6 and from RMB 2.63 to RMB 3.1/piece for G1. In turn, Tier-1 cell maker Tongwei’s prices for M6 and G1 cells jumped from RMB 0.89/W at the end of July to RMB 0.97/W.

The module sector was hit the hardest; not only module prices but prices for module auxiliary materials were also rising in Q3. Many grid-parity projects in China have been postponed until next year as a result of the hikes in module pries. But as polysilicon shortage started to ease in late August thanks largely to the blast-hit factories in Xinjiang reopening, polysilicon supply will recover and stabilize, allowing the prices to trend steadily downward over Q4. 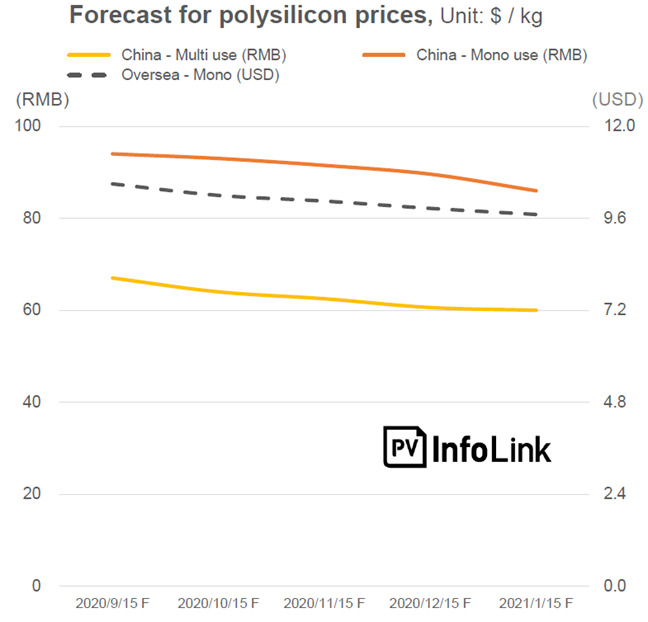 While polysilicon production is ramping up, many markets have been in the midst of post-corona reopening since the start of Q3, prompting global module demand to recover. Against this backdrop, PV InfoLink has revised its post-corona forecast for global module demand from 108.8 GW at the height of the pandemic during the first half of the year to 124.7 GW. The forecast would rebound to 140.1 GW in 2021—when PV projects postponed during the pandemic are expected to be commissioned and demand to pick up in India and look strong in Middle-East and Latin American markets.

Meanwhile, top ten module producers seemed to have gained favor from the toll corona had taken on the solar market. In PV Infolink’s module shipment rankings for the first half of this year—in which Jinko retains the top spot—they gobbled up to 85% of the market share, compared with just 60% to 70% during the past two years. Clearly, the module market sees growing dominant among large Chinese manufacturers. 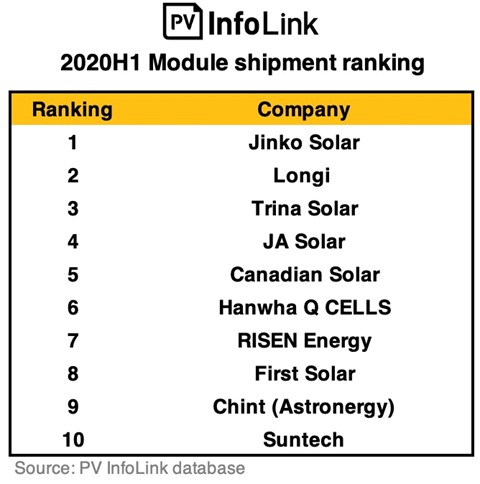 As the U.S.-China trade war escalates, there is yet another flip-flop on U.S. policy concerning the exemption of Chinese bifacial panels from Section 201 tariffs. Trump’s proclamation announced in mid-October cited that it would revoke the bifacial exemption and raised the tariff rate from 15% to 18% in 2021. This attempt, however, was threw into limbo until after the election by the U.S. Court of International Trade late in the month. A hearing is expected to be held on Nov. 5 to decide whether Trump’s proclamation will affect an earlier injunction against bifacial tariffs.