Keeping global warming under 1.5 degrees Celsius and climate fund are still hot topics at the COP27 UN Climate Change Conference that ended in November. Industrial restructuring to address climate change will come with a new wave of low-carbon asset management and investment, while strong demand for renewables will drive capacity expansion across the solar supply chain. Despite emergence of modules featuring low carbon footprint in solar exhibitions, realistically, most manufacturers have yet to evaluate and develop measures for low-carbon transition when ramping up capacity.

On the demand side, skyrocketing energy prices caused by Russia-Ukraine conflict accelerates the EU’s renewables deployment, leading to an increase in the share of EU of global solar demand. Meanwhile, the EU will start trial run the Carbon Border Adjustment Mechanism (CBAM) from 2023 and implement the scheme in 2027. Although the CBAM is initially designed for carbon intensive industries, more industries are expected to be covered, including the solar industry, whose electricity consumption is high. Other regions also introduced similar measures, such as France, which applies the low-carbon regulations on modules, requiring an official carbon footprint assessment of all modules to be eligible for public tender, with a carbon footprint limit of 750 kg CO2/kW. Moreover, the French Energy Regulatory Commission (CRE) requires rooftop projects with size ranging from 100 kW to 500 kW to use low-carbon modules and solar projects selected in the CRE4 tenders must have a carbon assessment of carbon footprint less than 550 kg CO2/kW. The South Korean government also launched a Carbon Footprint Assessment standard to classify modules into three grades depending on the carbo emissions, prioritizing modules with low carbon footprint for incentives and tenders. Against these backdrops, demand for low-carbon modules will increase in Asia.

Overall, impact of the CBAM is enhanced as solar demand from the EU increases. The redistribution of advantages among solar companies after carbon tax should be heeded. Also, how to transit to a low-carbon economy and stand out in the competition amid huge existing capacity and continued capital inflow is a challenge facing companies. 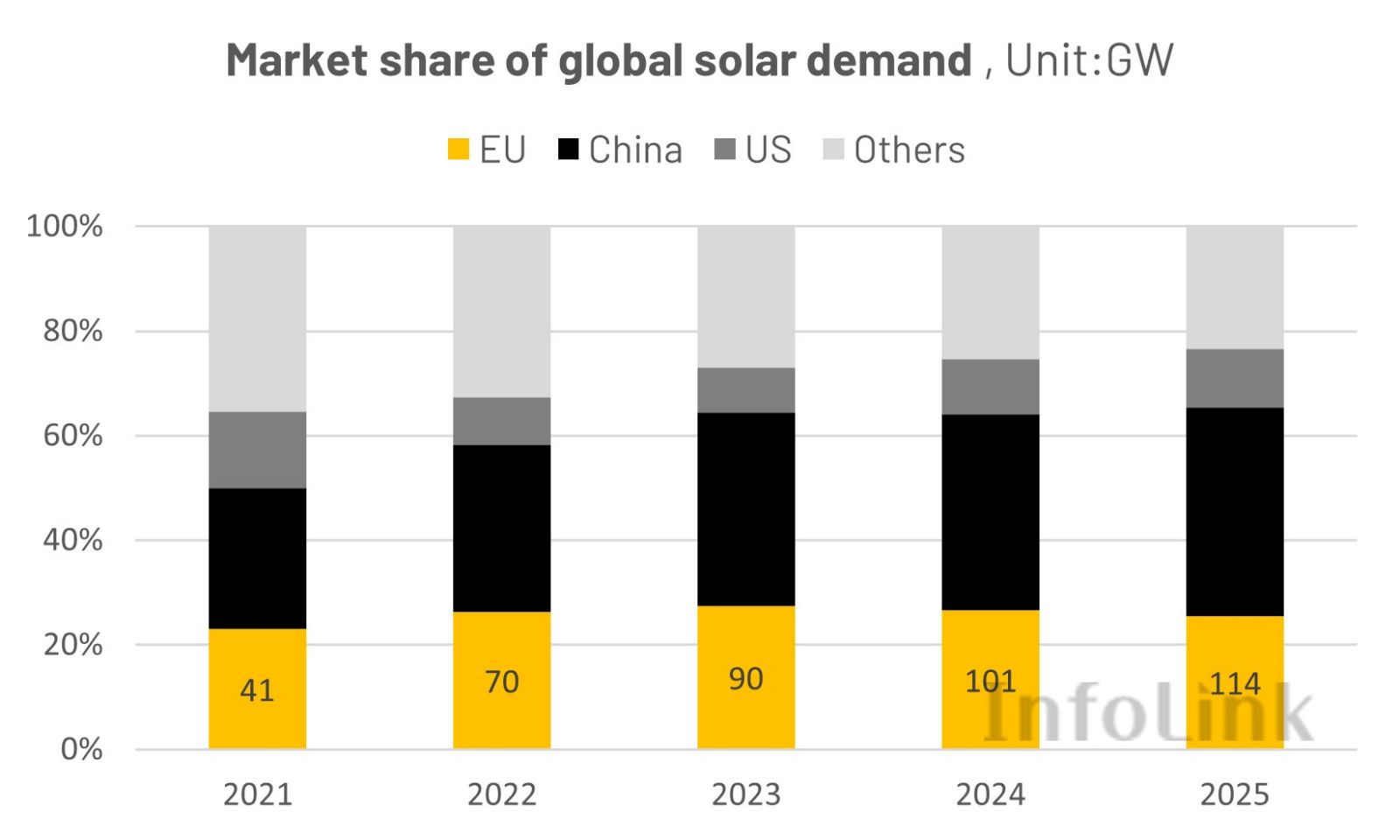 Looking into the carbon footprint embedded in modules, different calculation conditions and product standards can lead to a difference in actual values. However, polysilicon is the major source of emissions, contributing to nearly half of total emissions of modules. Followed by the ingot segment that has high electricity consumption, glass, and BOM such as EVA.

Businesses looking to cut emissions from modules can take two actions – improving the use of materials and driving up module efficiency. Based on the public information, granular silicon enjoys advantage over silicon rod in terms of carbon emissions, and so manufacturers can reduce emissions by raising the proportion of granular silicon use. In addition, lowering consumption of materials can bring direct emissions reduction. This year’s significant progress in wafer thinning due to high polysilicon prices also helps cut emissions. In terms of efficiency, increases in power output of module surface per unit can lead to higher wattage in the condition of using the same materials, thereby reducing the overall carbon emissions.

Based on the third-party certified materials, today’s low-carbon modules can bring carbon emissions down below 450kg per kW; a few can reach below 400kg per kW. However, the biggest challenge is that manufacturers mostly choose PERC and next-generation TOPCon technologies to gain advantages over costs and price performance amid intensive price competition. In terms of manufacturing site selection, China is the most favored among manufacturers, followed by Southeast Asia.

To tackle these challenges, businesses can start emissions reduction by taking three steps:

Following the establishment of carbon markets and introduction of carbon tax worldwide, more and more industries will be covered by carbon regulations, making carbon price or carbon tax the environmental cost businesses must pay for. Companies should start counting emissions embedded in their activities and then calculate the derived carbon costs for developing a carbon reduction action plan.

Paving way for the new and replacing the old

Collecting data of carbon footprint can help identify workable actions. As wafers are thinned down aggressively, the consumption of silicon has come in at 2.45g per wattage. The lower the silicon consumption, the lower the emissions. Thinner wafers, coupled with price downward trend in polysilicon expected in 2023, and limited reduction in silicon consumption brought by PERC and TOPCon technology in the future, HJT, with low-temperature, shorter process flow and could be thinned down further, may stand out in the market pursuing low carbon emissions. This means that manufacturers that seek to secure a place amid this trend should not overlook the development and cost reduction of HJT technology.

Through measuring and reporting on carbon footprint, companies can decide which step should be prioritized to achieve supply chain decarbonization, may it be the inclusion of wafer thinning in R&D, the layout of low-carbon technology route, the adjustment of BOM usage and sources, or even the elimination of production lines with higher emissions in the future.

Carbon emissions from manufacturing vary greatly not only between countries, but also between provinces in the same country due to difference source of electricity. Thus, businesses should consider carbon factors when selecting a location for capacity expansion. Taking polysilicon manufacturing as an example, the six (A-F) manufacturers are based in Inner Mongolia, Jiangsu, Sichuan, Qinghai, Shaanxi, and Xinjiang. If we measure the carbon emissions generated by electricity consumption per kilogram of polysilicon, it appears that despite higher electricity consumption, the carbon emissions are lower than those of competitors. This means that if a facility uses clean source of energy, its overall carbon emission factor would be more competitive. Low-carbon trends post potential risks for solar manufacturers, but also bring opportunities for product differentiation. Leading companies with a large market share need to shift from defending against climate change to adopting a proactive net-zero strategy, consciously weighing cost reduction and efficiency improvement against carbon emissions. In such an environment, businesses should understand the carbon policy in each country to target specific markets and secure business opportunities. Although low-carbon products account for a lower market share now, such products have a room for premium. Therefore, companies should consider adjustment to materials and technology first, and then replace older production lines. Carbon strategy will determine a company’s competitiveness in the decade to come.