Overseas demand grew vigorously in 2022 as prices for traditional energy surged. The total export volume in the first half of 2022 was more than doubled compared with the previous year. The figure peaked in July, then stepped on a ceaseless decline for four consecutive months. China customs data compiled by InfoLink shows the nation exported 10.7 GW of modules, a 44% year-on-year increase, far less than the 102% in the first half of 2022. It was also a 9% month-on-month decrease, a more evident decline compared with the previous month. From January to November, China exported 144 GW of modules, 80% more than during the same period last year. 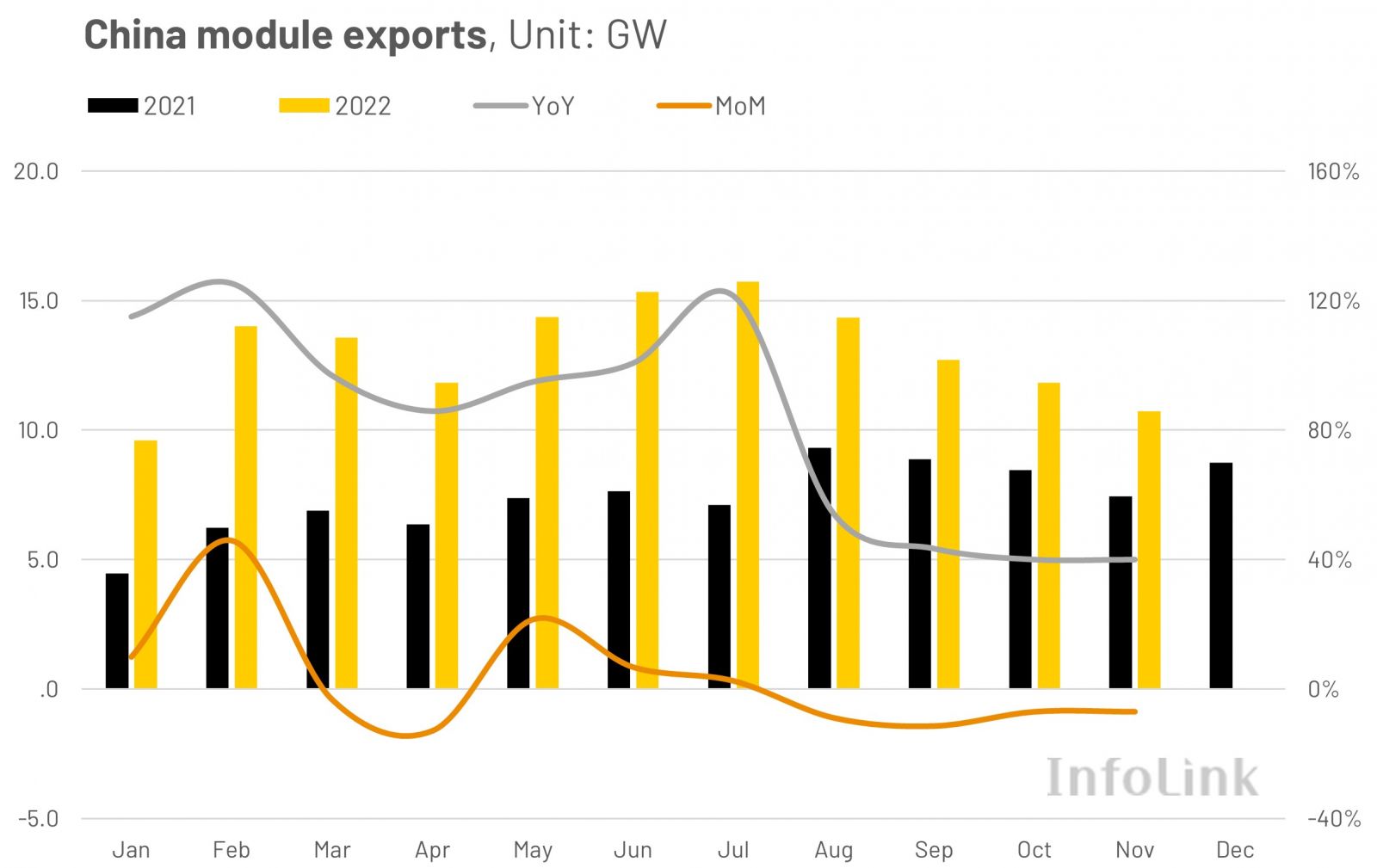 Demand of all markets waned in November, except the Middle East. Besides Europe, where demand has been shrinking continually, the U.S. also saw a significant decline in November.

Europe imported 6.1 GW of modules from China in November, a 127% year-on-year increase but a 12% month-on-month decrease, as the figure was 0.8 GW smaller compared with the 6.9 GW of last month. Currently the biggest export market for Chinese modules, Europe imported 80.7 GW of Chinese modules from January to November, accounting for 56% of the nation’s total module exports.
Without a local PV supply chain, Europe relies on imports of PV products from China. In 2022, the Russia-Ukraine conflicts sent prices for traditional energy skyrocketing, underlining the imperative of an energy transition. As a result, PV demand soared, with countries including Spain, Germany, and Poland seeing marked growths. Against this backdrop, the volume of Chinese imports increased rapidly from 3.9 GW in January, then peaked at 9.1 GW in July.

Even though the long-term demand appears strong, inventory depletion failed to catch up with import activities in 2022, due to inverter and labor shortages. Investigation of InfoLink found a huge disparity between module import volume and actual installed volume in Europe. As inventory built up, developers pared back purchases in the second half of the year. The volume of Chinese imports duly dropped every month from July onwards.

Given the holiday and the cold weather, the first and fourth quarters are the typical low seasons. For demand in the last quarter of 2022, the die was cast, and demand  is not likely to recover to levels of the second and third quarters of 2022 in the first quarter of 2023.

In the first quarter of 2022, India’s imposition of the 40% Basic Customs Duty on modules sent shock waves through the Asia-Pacific market. The Indian market contracted rapidly as the duty took effect in March, with merely 85 MW of monthly demand. Yet, the country secured its position as the biggest market within the region with 8.1 GW of imports during January and March.

As the Indian market shrank, other Asia-Pacific countries, including Japan, Australia, and some Southeast Asian countries, posted evident increase in the volume of Chinese imports in the second quarter. Monthly demand had been sustaining at 1.8 GW until November.

Japan imported 6.4 GW of modules from China during January and November, a 20% growth compared with last year, making it the second largest in Asia and the world’s fifth largest export market for Chinses modules. As in 2021, Japan imported more modules in the second half of 2022 than in the first half of the year.

Australia was the third largest in the Asia-Pacific region and the world’s seventh-largest export market for Chinese modules. The market had imported around 4.7 GW of modules from China. Its import saw a significant setback in the fourth quarter, with monthly import volume dropping lower than 300 MW in October and November. If the downward trend persits into December, annual import volume of 2022 will fall short of the 5.1 GW of last year.

Other markets, such as Thailand, the Philippines, South Korea, and other Southeast Asian countries, saw rising demand, having importing 6.8 GW of modules from China during January and November, a 47% year-on-year increase.

The volume of Chinese modules dropped markedly in November due to the decline of import volume of Brazil. Brazil was the largest market in the Americas in 2022, importing 16.8 GW of modules from China during January and November, a nearly 80% year-on-year increase. Such a massive volume of imports is a result of the Law 14.300 introduced in early 2022. According to the law, small-scale distributed generation projects will be subject to a grid fee from 2023 onwards. The new law gave rise to an installation rush, making Brazil the world’s second largest export market for Chinese modules, second only to the Netherlands, the logistics hub of Europe.

However, the volume of Chinese modules imported by Brazil dropped by 28% from 1.5 GW in October to 1.1 GW in November because the year of 2023 was close, and developers, given inventories piled up due to strong inventory draws during previous months, slowing down purchase. Presently, some institutions requested to postpone the charge of the grid fee. A final decision has yet to be announced.
In addition to Brazil, other major markets of the Americas include Chile, Colombia, Mexico, and Dominica, which all saw significant growth in import volume in 2022 compared with levels of the previous year. Changes of import volumes of these countries in November were mixed but relatively small, posing far less impact than that of Brazil.

The Middle East imported 0.8 GW of modules from China in November, a 92% year-on-year increase and 38% month-on-month increase. The region imported 10.3 GW of modules during January and November, a 75% year-on-year increase. Major drivers behind demand in the Middle East include the UAE, Pakistan, Israel, and Saudi Arabia. In 2022, the UAE and Saudi Arabia posted the greatest growths. The UAE is the biggest source of demand in the Middle East, importing 3 GW of modules in 2022, a geometric growth from the 800 MW of the previous year. Saudi Arabia also posted a marked increase in import volume from 100 MW in 2021 to 1.1 GW in 2022.

Significant growths of import volumes of the two countries can be largely attributed to deliveries of orders of utility-scale projects. In the Middle East, the promotion of utility-scale projects fuels up the growth of demand. Recently, Saudi Arabia and China signed several renewable energy investment agreements. Market movements are to be heeded more closely next year.

Africa imported 0.29 GW of modules from China in November, a 58% year-on-year increase. Actual increase in import volume was meagre as the base number was small. Month-on-month increase dropped by 1%, also a slight change. 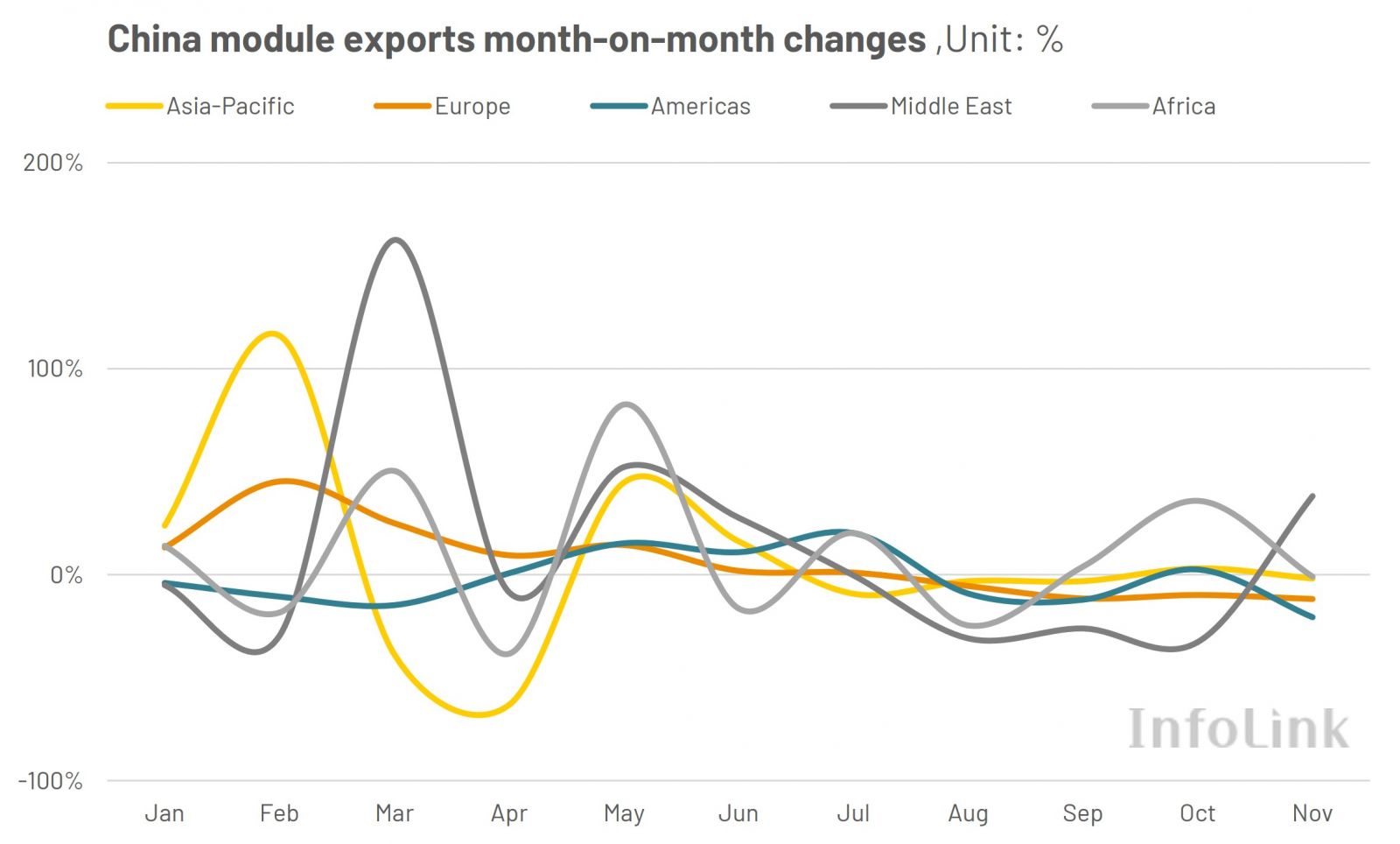 The export volume of Chinese modules declined incessantly in the second half of 2022. This was mainly a result of the overbuying of Europe, a market accounting for 56% of export volumes, during January and July. Similarly, Brazil, with demand increasing markedly this year, may see a gap between module import volume and actual installed capacity. Therefore, high inventory level is expected to continue affecting demand overseas in the short term.

In 2023, inventory draws overseas will not pick up until the second quarter, given the lackluster European market at the beginning of the year and waning demand in Brazil.


Anti-circumvention probe updates: Impacts on U.S. solar market NEXT
Back