Data from the China Customs compiled by InfoLink shows China exported 78.7 GW of modules in the first half of 2022, a 102% YoY increase, with all monthly export volumes doubling YoY, signaling the world’s robust demand for Chinese PV products. 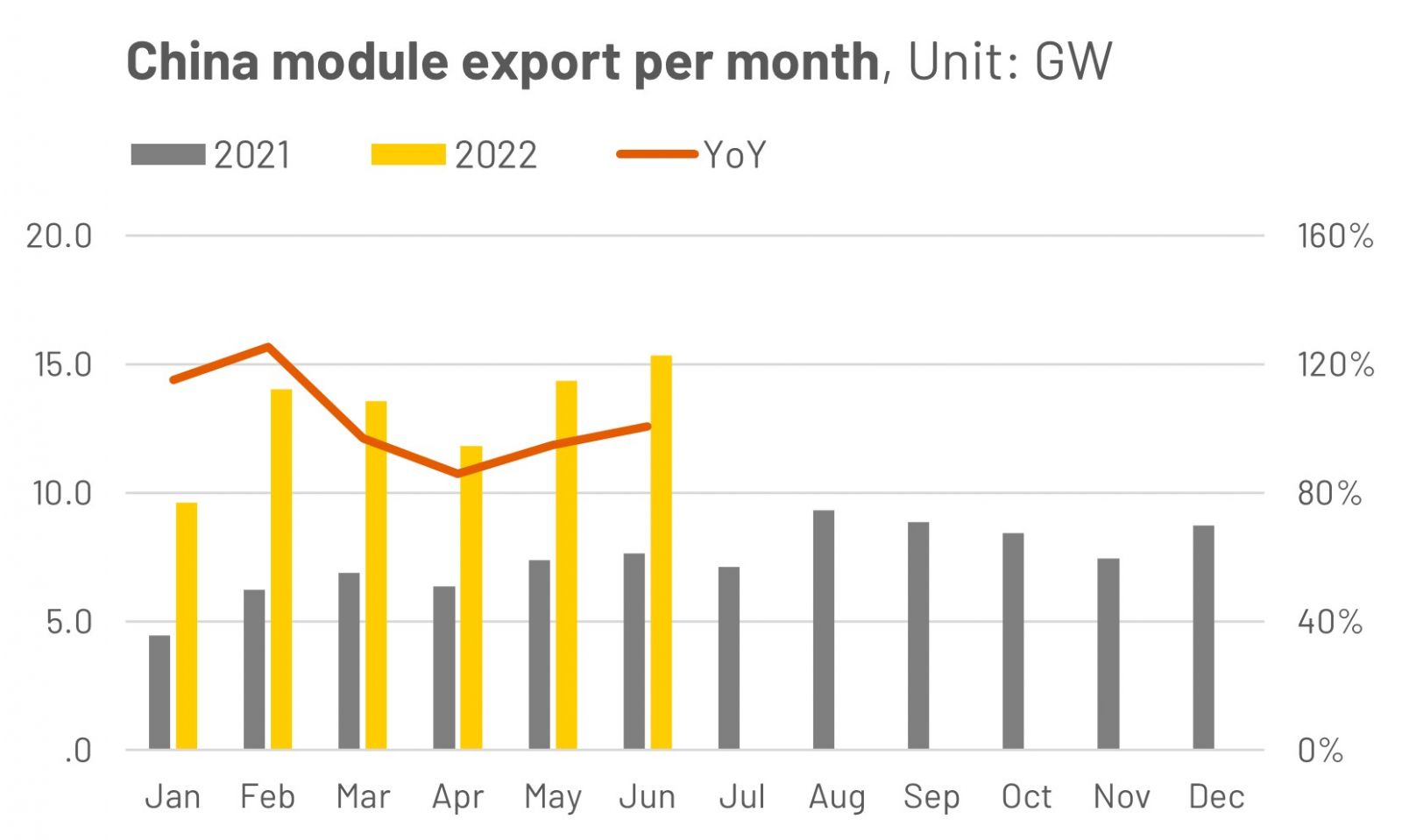 Europe posted the strongest demand in the first half of 2022. The bloc has imported 42.4 GW of Chinese modules, a 137% YoY increase, with the figure rising on a monthly basis.

Europe has been working the most actively on energy transition, which is now ramped up by the natural gas supply crunch resulted from the Russia-Ukraine conflicts. For now, seven countries, including major markets such as the Netherlands, Spain, and Germany, have imported at least 1 GW of Chinese modules. However, investigation of InfoLink finds some of the imports to be inventory buildup beforehand, with no substantial orders being signed. This may affect European demand in the second half of the year.

The EU and some member countries have set bolder energy transition goals. For instance, REPowerEU Plan of the EU and the new Renewable Energy Act (EEG) of Germany both raise installed PV capacity targets. These long-term, supportive policy frameworks sustain Europe as the biggest market for Chinese modules. InfoLink expects the bloc to have 55.6 GW of annual module demand.

The Americas received 12.1 GW of modules from China in the first half of 2022, a 96% YoY increase, contributed mostly by some major markets other than the U.S. For instance, Brazil imported 9.0 GW of modules in the first half. The country will charge grid fees for distributed generation projects from 2023 onwards, which underpins demand until the end of 2022. Chile, another major market for Chinese modules, has imported 1.3 GW for the time being.

The Americas is expected to have 46.0 GW of module demand in 2022. All countries within the region rely on Chinese module supply except the U.S., which poses various tariffs on Chinese PV products amid trading conflicts.

However, risks still loom despite seemingly optimistic demand in the second half, given rising supply chain prices that stall end users, shortage of IGBT chips used in inverters, and exchange rate fluctuations. InfoLink forecasts the world to have 156.1-185.3 GW of demand for Chinese modules, translating to 20-42% of growth rate.

How solar supply match end user demand this year? NEXT
Back