According to the latest research from InfoLink, the Taiwanese PV market added 1,668 MW of solar installations in 2020, increased by 18% from the previous year. This year, the Bureau of Energy aims at installing 3 GW of PV capacity, an ambitious goal that requires excessive efforts by PV system investors.

ChengyaEnergy ranked No. 1 for first time

According to senior analyst Sharon Chen of InfoLink, ChengyaEnergy surged to the first place, thanks to the utility-scale floating project in East Lunwei, Changhua that was connected to the grid at the end of 2020. Being ranked second last year, Chailease Energy has remained the same market share for consecutive years. Attributed to the three major indicative projects that were subsequently grid-connected in 2020, Tier-1 PV investors have commissioned more than 100 MW of PV capacity last year, with the top-five getting hold of 47% of the market share aggregately. 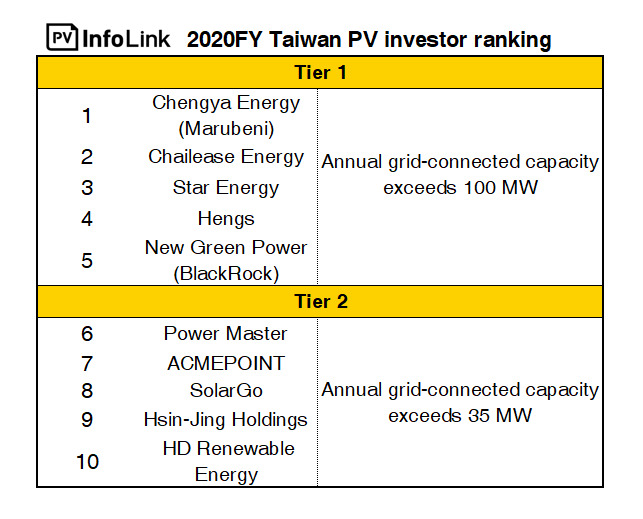 It is worth noting that system suppliers Power Master and ACMEPOINT have maintained on the Tier-2 investor ranking for three years in a row, suggesting favorable remarks and reputations they have received in the market. Having long been dedicating in the downstream sector, SolarGo, Hsin-Jing Holdings, and HD Renewable Energy made it to the list for the very first time. Suppliers such as AcBel, Ina, and PGE, although failed to enter the top 10 last year, show great potentials, with their prospects looking bright.

As the fishery-solar plant locations prioritized by the Taiwanese government are being developed, and projects deferred in 2020 are underway, the 2021 PV system investor ranking is expected to shuffle again.