According to South Korea’s newly adopted Green New Deal agenda, the government will introduce a carbon tax, phase out overseas coal financing, and develop renewable energy, with a focus on solar and wind. In addition, the government has pledged to reach net zero emissions by 2025.

Under the Korean New Deal unveiled in July, which offers strategies for a way out of the COVID-19 crisis, the government plans to expand the scope of the initiative, pushing the total investment of US$60 billion to US$84 billion over the next five years.

Meanwhile, South Korea’s environmental, social and governance (ESG) investment market soared this year, having sold US$11.9 billion of the socially-responsible bond as of August, overtaking China as Asia’s biggest issuer of sustainable debt and ranked the fifth globally. To fight COVID-19, investment in the renewable energy sector is expected. 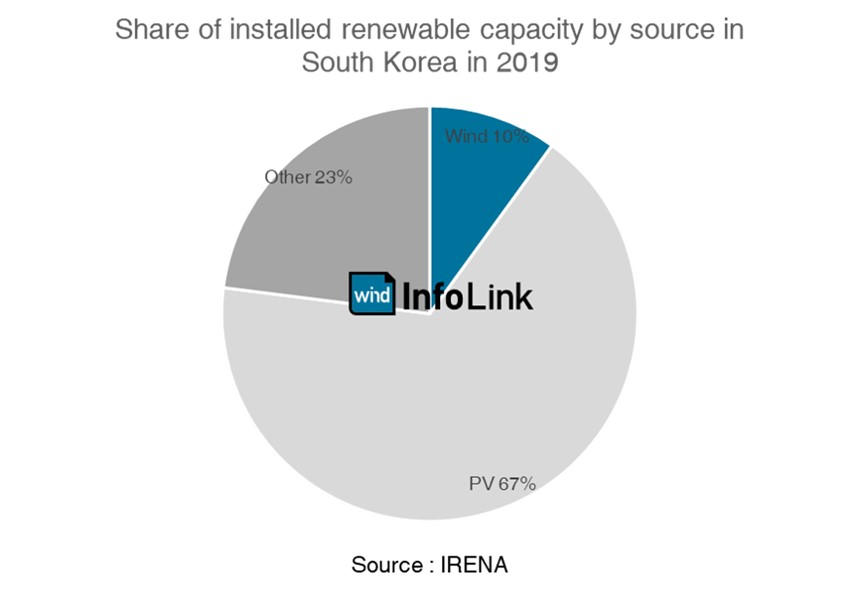 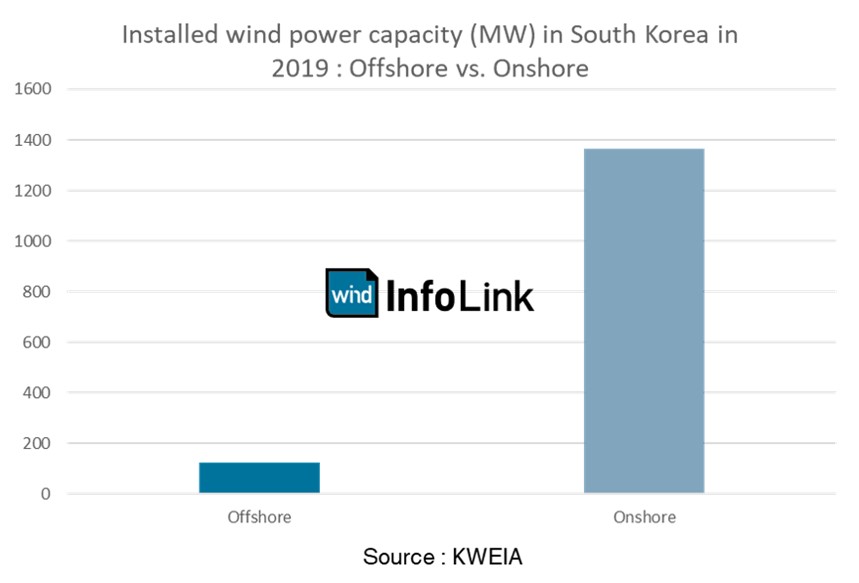 Cumulatively, South Korea has installed 1.36 GW of onshore wind capacity and 124.5 GW of offshore wind in 2019. President Moon Jae-in’s ruling Democratic Party announced the Renewable Energy 2030 Implementation Plan (RE3020) in 2017, setting a goal to increase energy from renewable sources from 7.6% to 20% by 2030. This July, the government pledged to expand the country’s offshore wind power capacity to 12 GW by 2030 from the current 124 MW, meaning that offshore wind will represent 24% of total renewable capacity. This goal is to make South Korea one of the world’s top five offshore wind energy markets by 2030.

To meet the ambitious target, South Korea’s Ministry of Oceans and Fisheries and the Ministry of Trade, Industry and Energy (MOTIE) released a paper in July for promoting mutual benefits between local residents and fishers from the development of offshore wind. The paper has identified the key offshore wind development zones, including waters off the southwestern Jeolla, Sinan-gun, Ulsan, Jeju Island, and Incheon. The paper also includes a plan to engage in R&D to optimize wind turbine costs and achieve domestic production of 8 MW wind turbine by 2022. The medium- and long-term goal is to develop floating wind technology. Against this backdrop, offshore wind capacity is expected to grow continuously in South Korea. 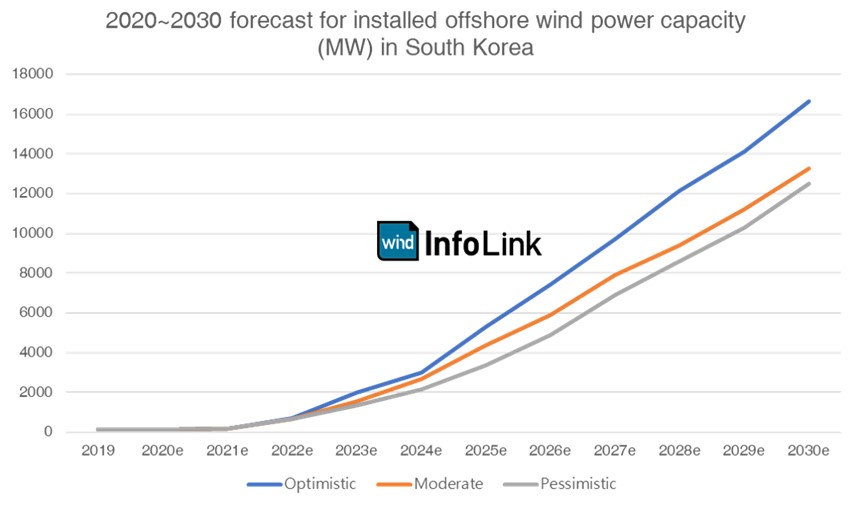 South Korea promotes renewable energy growth through renewable portfolio standards (RPS) scheme, under which utility firms with power generation exceeding 500 MW (22 firms at present) are obliged to meet a certain share of renewables in their generation portfolios. Those who fail to do to so can meet the target through buying RECS. In the weighting scheme of RECs, offshore wind accounts for the highest ratio, and the weight value ranges from 2 to 3.5 depending on the distance between the interconnection facilities.

According to the document “Offshore Wind Power Development Plan for Coexistence of Residents and Fisheries” released by the Ministry of Oceans and Fisheries and MOTIE in July, the South Korean government will improve the offshore wind market environment through simplifying the procedure of site survey and approval, enhancing acceptance of residents and environmental protection, as well as strengthening the competitiveness of the industry through economics of scale. It’s worth noting that South Korea intents to develop offshore wind manufacturing and supply chain and has geared up for research and development in floating wind technology.

MOTIE is expected to publish regulations governing offshore wind development at the end of the year and publish the list of consideration zone at the beginning of 2021. These moves may accelerate the timeline of offshore wind projects. 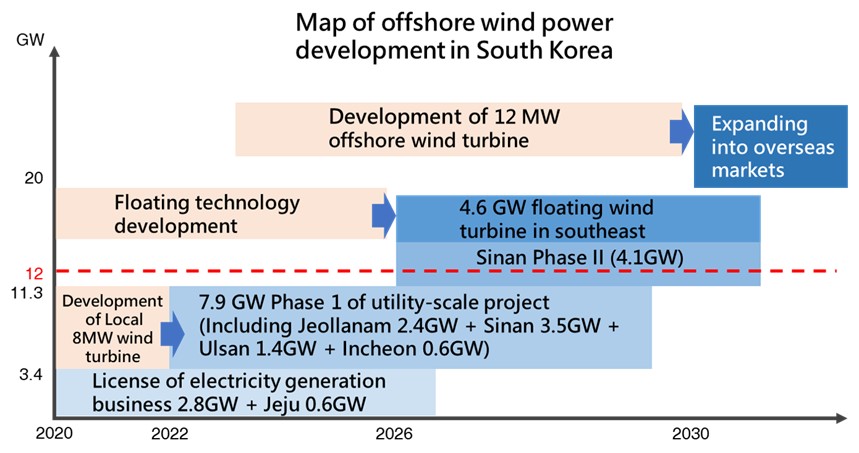 Based on the “Offshore Wind Power Development Plan for Coexistence of Residents and Fisheries” published in July, South Korea will prioritize the key development zones for developing offshore wind farms.

MOTIE has signed an agreement of “Development Plan for the Next 10 Years” with local government, Korea Electric Power Corporation (KEPCO) and Korea-based wind power company this July to facilitate the development of utility-scale offshore wind project in the province. Under the agreement, MOTIE will invest 14 trillion won (US$11.6 billion) on developing up to 2.4 GW offshore wind projects in wafers off Gochang and Buan. The 400 MW Phase 1 of the project is expected to begin in 2022, followed by 2 GW Phase 2 in 2023. The first and second phase of the project is expected to complete construction in 2025 and 2028, respectively.

The government of South Jeolla is planning to hold a public hearing to collect public comments on the management plan for waters off coast from Jeju, Gyeonggi-do, to Incheon. Of the development plans with clearer direction, 3.5 GW projects are led by the local government and the remaining 0.6 GW are developed by private firms, with the former to begin construction by 2023 and the latter in 2021. The total capacity to be developed in the first phase of the project in the region totals 4.1 GW. However, pre-feasibility study is still needed for the site.

Waters off the coast of Ulsan have been identified as a key development area for floating wind farms. In addition to developing a 200 MW offshore wind farm, the city government of Ulsan has signed a Memorandum of Understanding (MoU) with 19 developers, including Equinor, Shell, CoensHexicon, GIG, CIP-SK E&S, and KFWind in June to support offshore floating wind development and promote the region as a manufacturing hub for domestic and export offshore wind business. At present, the local government is surveying the wind resources. The wind farm is expected to be developed in phases from 2023, with the operational result of Phase 1 to serve as a base for developing a 4.6 GW floating wind farm in southeast coast.

Jeju, which began offshore wind development with demonstration project, is now moving toward commercial scale. The local government is working closely with local fishing industry and residents to make sure that offshore wind facilities are developed responsibly. Moreover, it has formed Jehu Energy Corporation (JEC) to select wind farm sites and developers.
So far, Jeju is the only province in South Korea that has designated a marine resource development zone for offshore wind projects to avoid fisheries-related conflicts. The relative transparent procedure also helps improve acceptance of local residents. Jeju has selected five offshore wind development zones, with 600 MW capacity under development. In addition, Icheon city focuses offshore wind farms in waters off large cities, with up to 600 MW capacity to be developed. 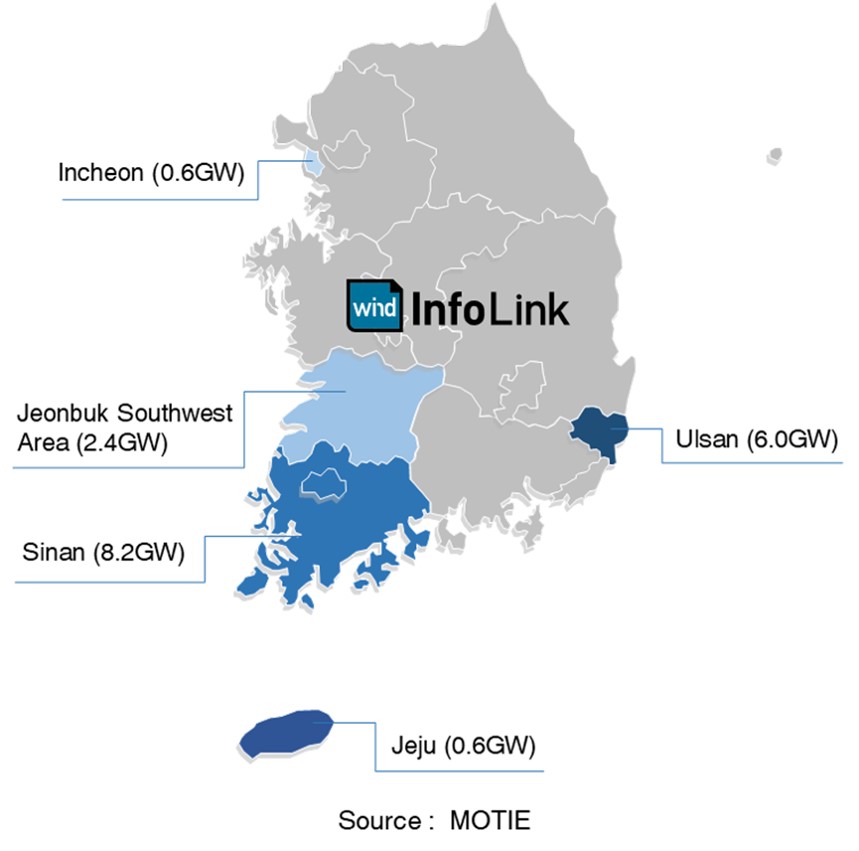 (May of key development zones before 2030)

Updates on the offshore wind industry

The South Korean government’s New Green Deal has set clear goals for offshore wind development in the short, medium, and long term, which is expected to drive steady growth in offshore wind power through 2030. With the direct involvement of the government towards the offshore wind industry, local committees have been formed in most of the development zones to ensure smooth communications between developers and local fishery and residents. Ulsan, in particular, tries to attract developers of floating wind farms by promoting the city as a floating wind development zone.

However, the threshold is high for foreign developers who is interested in the offshore wind market, as South Korea strives to revitalizing local industries and developing turbine manufacturing. Taking Jeju Island for example, the local government has formed Jeju Energy Corporation to help support the island’s offshore wind industry. In addition, the fluctuations of REC prices in the market also increases risks for developers.

At present, South Korea has a cumulative offshore wind capacity of 124.5 MW. With an ambitious goal of achieving 12 GW of cumulative installed capacity by 2030, the MOTIE is expected to announce national level regulations governing the offshore wind sector. Whether it will offer incentives or relax rules for foreign developers should be closely watched.