Fossil fuels hold the lion’s share of Vietnam’s energy mix. They account for around 52% of the nation’s installed energy generation capacity in 2020—a figure that is higher than the official target. While the government is urged to reduce the share of fossil fuels in the national energy mix, coal imports in the January-June period rose 53% from a year earlier, totaling a record high of 31.5 million tonnes. But just as domestic power demand is growing, demand for all energy sources, including renewables, continue to pick up.

Vietnam’s installed renewable generation capacity mainly comes from hydropower, which accounted for over 70% of the total, followed by 23% solar PV and 2% wind power. 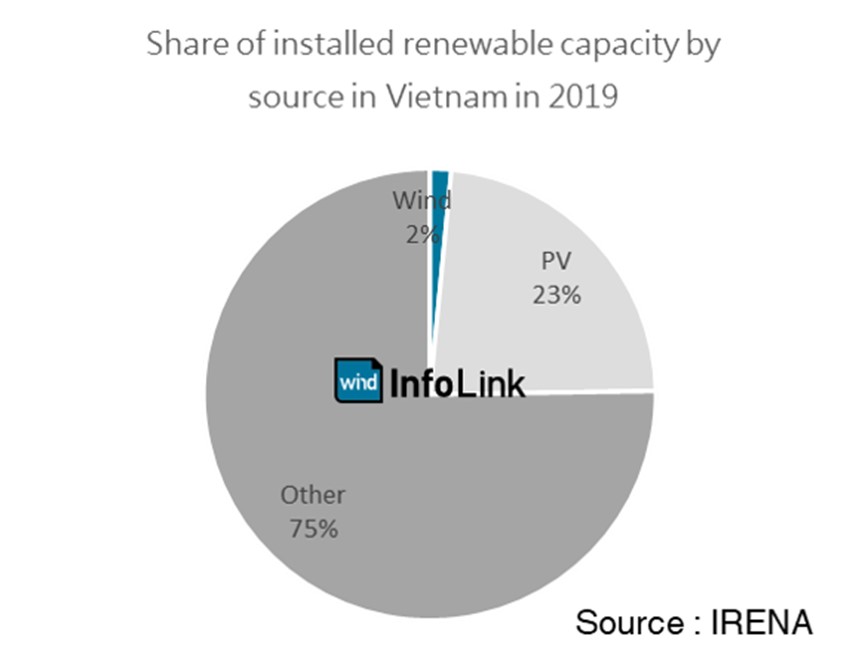 Vietnam has set mid- and long-term renewable targets in the Power Development Plan VII (PDP VII) for the period of 2016-2030. Revised in 2016, Vietnam raised its renewable capacity target from 5.37% in 2015 to 21% in 2030. The PDP VIII, which is still under discussion, proposes to prioritize energy efficiency and increase Vietnam’s installed renewable capacity to as high as 30.8% by 2030, with 14.5% of which sourcing from PV and 13.8% from wind. Moreover, the plan outlines strategies to cut the share of high-emission coal-fired generation capacity to 26.9% from 42.6% as set forth in the previous version, and raises the share of lower-emission gas power generation capacity from 14.7% to 18.8%. All these moves point to Vietnam’s growing effort toward reducing carbon emissions. 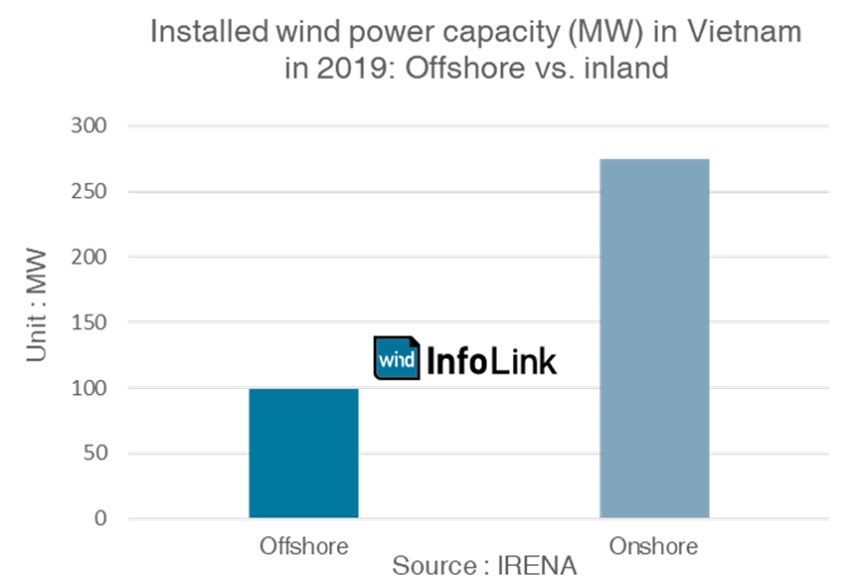 In Vietnam, there is only 99.2 MW of installed offshore wind capacity. However, the government has approved 3.1 GW of new wind power projects in June this year, most of which are intertidal wind farms located in the Mekong Delta region. Moreover, Vietnam’s offshore wind capacity is predicted to explode between 2020 and 2024, as the feed-in tariff (FIT) program for wind power may be extended to the end of 2023 and it is relatively easy to install turbines in an intertidal wind farm than an offshore one. So, in an optimistic scenario, Vietnam could top 4.5 GW in installed offshore wind power capacity by 2025.

The draft PDP VIII points out how critical the role that the transmission network plays in expediting renewable development. As one of the areas that are key to Vietnam’s economic development, the Mekong Delta is included in a project dedicating to improving electricity transmission lines as well as the major regions in Vietnam for offshore wind development. Therefore, in an optimistic projection, Vietnam’s offshore wind power capacity could exceed 9.5 GW by 2030, taking into account the 400-MW growth in the southwest of the Mekong Delta every year from 2025 onward and the potential of the southeast and central parts of the nation for hosting offshore wind power capacity. 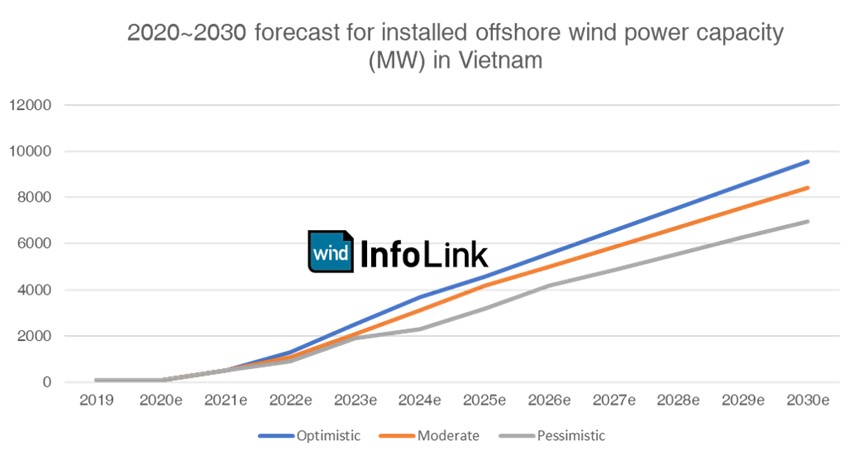 Conversely, under a pessimistic scenario, Vietnam’s installed offshore wind power capacity could reach a mere 3.2 GW by 2025, given the fact that slow grid expansion and underdeveloped infrastructures such as ports and roads would make it difficult for approved projects to connect to the grid by the end of 2023. In addition, the authorities have yet decided when and how to execute an auction mechanism for renewables. If such a mechanism is implemented after 2023, it would slow down the development of offshore wind power in designated regions. In that case, the nation’s installed offshore wind power capacity would grow to only 7 GW.

Overview of offshore wind power policy and developments in Vietnam

According to the consultation paper on the review of PDP VIII issued recently, Vietnam plans to raise the wind power capacity to 19 GW—which would account for 13.8% of the total installed generation capacity—by 2030. That means adding 18.6 GW in a matter of ten years. It has even set a 2045 target of 60 GW, which would represent 21.8% of the total installed generation capacity.

Afterwards. Under PDP VII, it approved 91 onshore and offshore wind power projects proposed by the Ministry of Industry and Trade (MOIT). These projects amount to 7 GW in size, with 3.1 GW to be installed in offshore or intertidal wind farms. Seven of the projects will be constructed in Bac Lieu and Ca Mau, and a handful of intertidal projects will be installed in the provinces of Tra Vinch and Ben Tre in the Mekong Delta. In brief, offshore wind power capacity will keep growing in Vietnam over the next few years.

In July, Danish investment firm Copenhagen Infrastructure Partners (CIP) signed a Memorandum of understanding (MoU) with the government of Binh Thuan to develop 3.5 GW offshore wind project. With an estimated investment of USD 10 billion, the project will become one of the biggest offshore wind farms in Vietnam. 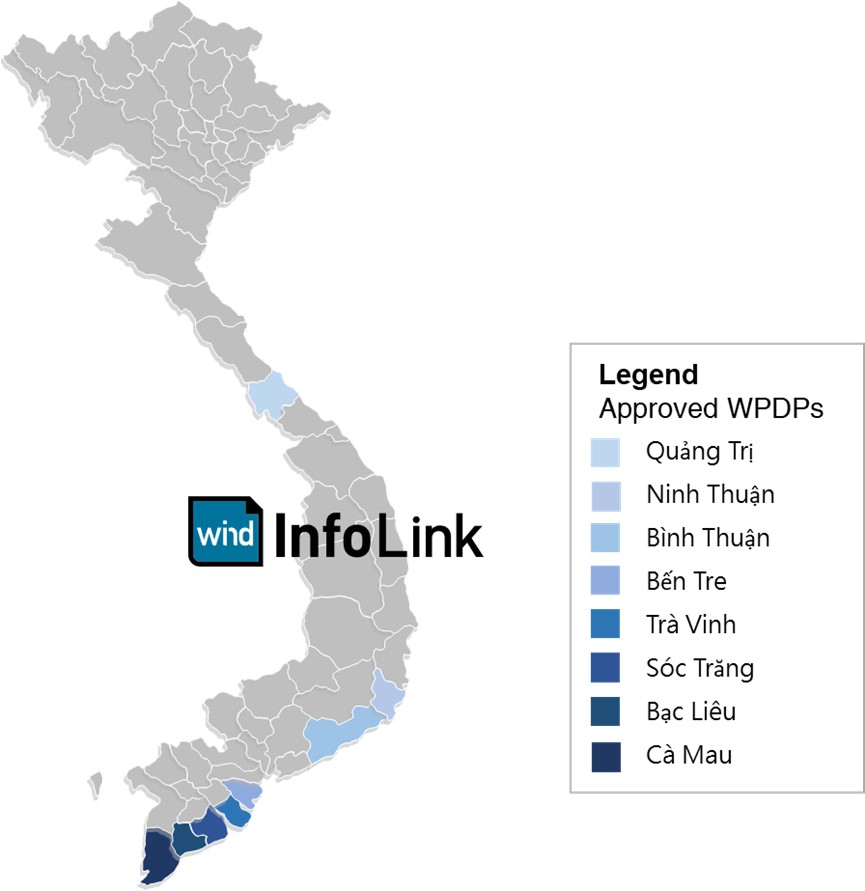 Offshore wind in Vietnam is largely subsidized by FITs. The current level sits at approximately USD 0.098/kWh for a duration of 20 years, although the rate is much lower than those in Japan and Taiwan that were introduced during FIT promotion.

But with the FIT rate for offshore wind having jumped by a high of 25% in 2018, the deadline for grid connection having been extended from 2021 to 2023, and the government having picked up the pace to approve wind power projects, the Vietnamese wind power sector should be able to see further growth.

Under Vietnam’s PPA framework, an intertidal or offshore wind power project could be developed after the project has been approved for inclusion in the applicable Provincial Wind Power Development Plan (PWPDP) and then PDP by the MOIT. Once the project is officially approved, it takes 1.5 to 2 years to complete a wind resource assessment. Moreover, criteria for an environmental assessment are not difficult to meet.

However, official schedules for constructing a wind project tend to be haphazardly arranged. There is no strict legal framework for wind development, and no punitive measures are enforced against Vietnam Electricity and other state-owned entities for failing to comply with the terms and conditions of the PPAs they have signed. These are the risks facing wind developers in Vietnam.

The Vietnamese wind sector’s strong focus on building intertidal wind farms constitutes ample business opportunities for turbine manufacturers and turbine component suppliers. Those who plan to enter Vietnam should take note of the fact that the majority of wind farms in the nation use onshore turbines with a capacity of less than 5 MW, and foreign producers provide both turbines as well as operation and maintenance services for 10 to 20 years. Foreign developers that have established a foothold in Bac Lieu include not just GE but also Vestas, which has won another contract as of July this year to supply turbines for the 50-MW second phase of the Dong Hai intertidal project. Vestas have provided its turbines for the first phase of the project. Boasting a 100-MW capacity, the Dong Hai project is currently the largest intertidal wind farm in Vietnam. It is the seventh intertidal order for Vestas. Over the past six months, Vestas has secured five such orders. The company has also won an EPC contractor for two Vietnam-based wind farms.

Siemens Gamesa has secured an order to supply turbines for the 75-MW Tan Thuan intertidal wind farm in Ca Mau. It has also signed a contract to provide operations and maintenance services for the wind farm for 10 years. This is the fourth intertidal order that Gamesa has earned in Vietnam.

Vietnam only has 99.2 MW of installed offshore wind capacity, but this figure will grow gradually from this year onwards. Vietnam’s campaign to increase the installed capacity of renewables and offshore wind will help reduce its heavy use of fossil fuels for electricity generation. This year, the Vietnamese government has announced potential offshore wind sites and approved around 3.1 GW of offshore and intertidal projects. Moreover, in July the government of Binh Thuan signed an MoU with CIP to develop 3.5 GW of offshore wind, and this project will entail an investment of USD 10 billion.

While policy uncertainty remains a bottleneck in the development of offshore wind in Vietnam, the nation’s agenda for intertidal wind farms offers promising business prospects for turbine manufacturers and turbine component suppliers. Since onshore turbines with capacity smaller than 5 MW prevail across Vietnam’s wind farms, this will fuel need for components made for turbines of similar sizes and delivery services for the turbines.