Japan’s 5th Strategic Energy Plan released in 2018 set a goal of achieving 22%-24% of renewable energy by 2030. The country is committed to deploying more renewables, lowering the dependence on nuclear energy and eliminating inefficient fossil fuels. 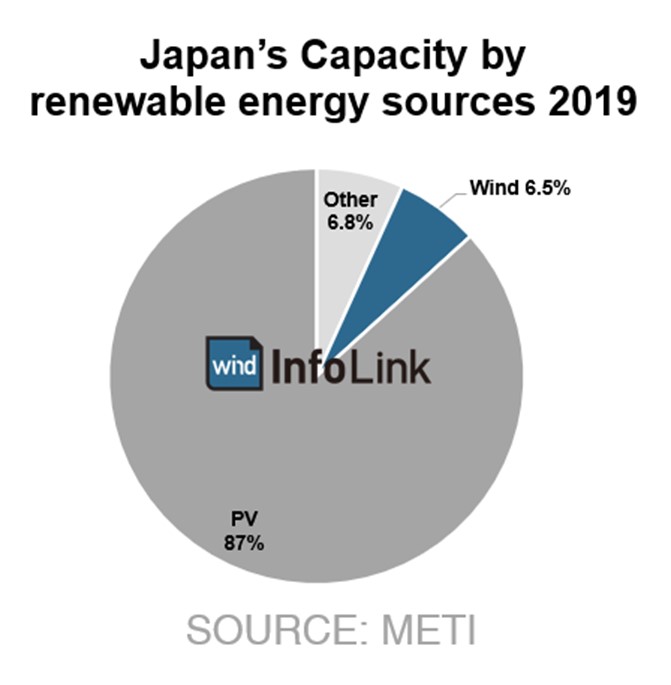 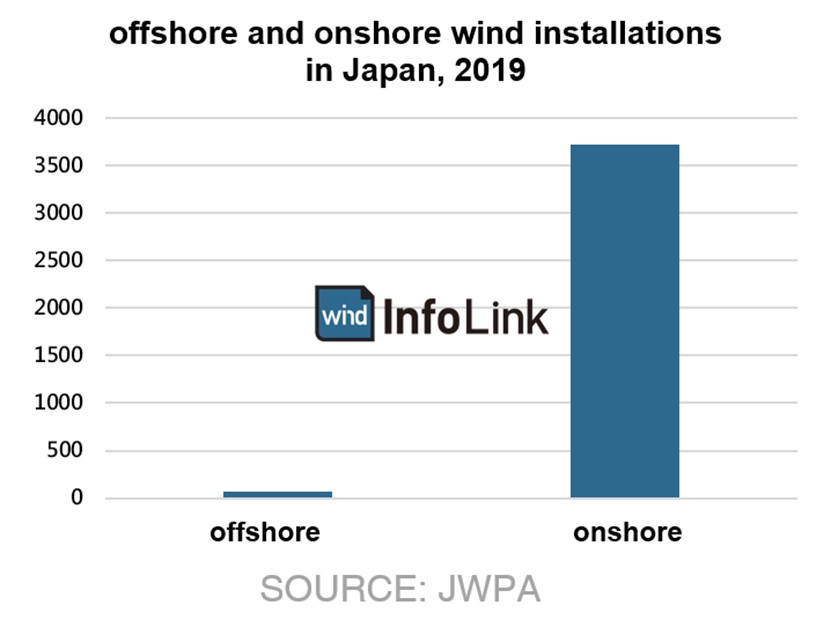 Currently, Japan has an installed offshore wind capacity of only 65.6 MW. Yet the projects under the environmental impact assessment (EIA) and application process have already exceeded 16 GW.

With Japan launching its auction in June for the Goto Islands project, the first offshore wind farm in the general waters, and announced to auction 1 GW offshore wind capacity a year from 2020 onwards, Japan’s policy direction for the offshore wind market has become certain toward the second half of 2020. And the policy clarity is expected to boost the wind supply chain.

Wind InfoLink provides estimated offshore wind capacity  for Japan in 2020 through 2030 under three scenarios.
Under optimistic and neutral scenarios, the projected capacity would reach more than 10 GW in 2030.

These projects are expected to drive up capacity over 2025 to 2030. As Japan will announce other designated promotion zones and have projects commissioned in phases amid rapidly growing market, it is estimated that there will be around 3 to 5 GW of potential capacity. 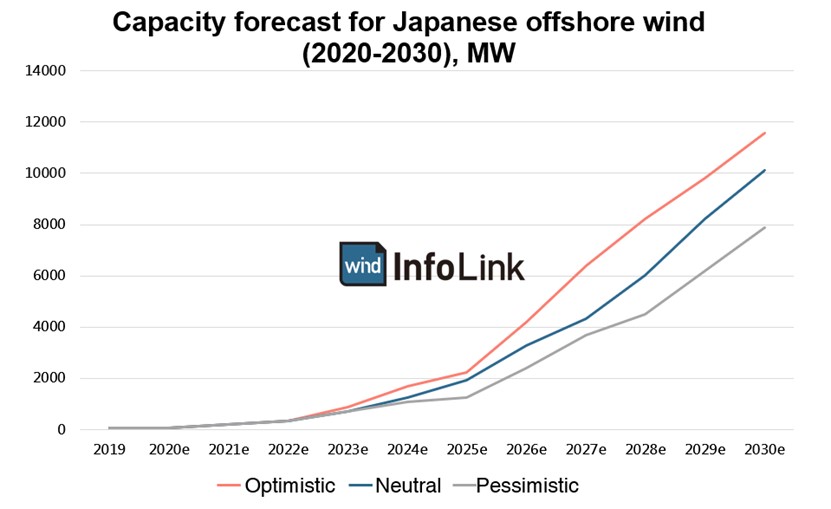 Under the pessimistic scenario, Japan would see less than 8 GW of projects coming online by 2030. Rationale behind is that although the Ministry of Economy, Trade and Industry (METI) plans to approve three to four promotion zones each year, which is almost in line with the pace of the industry, Japan's meticulous and complicated environmental impact assessment (EIA) would take three and a half to five years to review a development plan, making it a potential factor causing delays in projects. Policy and offshore wind power development overview:

In 2018, the Japanese government passed the Act for the Promotion of Use of Marine Areas for Development of Marine Renewable Energy Generation Facilities, allowing developers to bid for the operation of wind farms for up to 30 years. The auction for the Goto Island project, the first offshore wind farm, was held in June this year.  With a capacity of 22 MW, the floating offshore wind farm is capped at JPY 36/kWh (US$0.34). 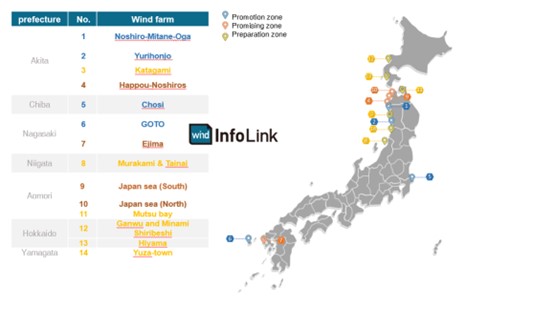 Japan adopts feed-in tariff (FIT) mechanism to accelerate investment in offshore wind energy. Currently, the FIT level for offshore wind power is set at JPY 36/kWh (US$0.34), one of the most generous among countries in the Asia-Pacific region. A wind farm can receive payment for 20 years under the FIT regime upon commissioned.

Starting this year, Japan will determine the FIT levels through auctions for bottom-fixed wind projects, whereas the FIT rate of JPY 36/kWh is applied to floating projects to encourage floating wind development.

To align with the market trend, the Japanese government is mulling over replacing FIT with the feed-in premium (FIP) model. Under a FIP scheme, the government will pay a premium on top of the average spot market price, meaning that the premium or the total payment is dependent on the market prices. Japan’s subsidy policy will be reviewed by March 31, 2021; Japan may adopt FIP for fixed offshore wind projects to be auctioned after 2023 .

According to the public auction guidelines revised in June 2020, wind turbines can operate in Japan’s general waters for up to 30 years. The timeframe includes three and a half to five years for the EIA process, two to three years for construction, 20 years for commercial operation, and two years for decommissioning.

General waters vs ports and harbors

Japan categories offshore wind sites into ‘general water’ areas and ports and harbors, with auctions held in the latter mostly managed by local governments. Offshore wind deployment in ports or harbors is still in the nascent stages. The most recent utility-scale projects are the 140-MW wind farms off Akita Port and Noshiro Port tendered by Akita Prefecture in 2015. The project was awarded to the consortium led by Marubeni Corporation. Having started construction this year, the wind farms are expected to go into commercial operation in 2022.

It’s recommended that interested developers target wind projects located in general waters. Procurement exercises for such projects are conducted by the Ministry of Economy, Trade and Industry (METI) and the Ministry of Land, Infrastructure, Transport and Tourism (MLIT). After the promotion zones are selected, the officials will invite developers to submit proposals and award winners based on review and evaluation results.

The evaluation criteria is divided into prices and business feasibility, which accounts for 120 points each. There is no strict local content requirements, such as the employment of local workers or domestically produced components. Price is the key  to winning a project, accounting for about 50% (120 points) of the evaluation criteria. About 33% (80 points) are the comprehensive evaluation of the developer’s achievements and project feasibility, power supply, etc. Whether they can add values to economy or bring negative impact to fisheries account for only about 17% of total points. 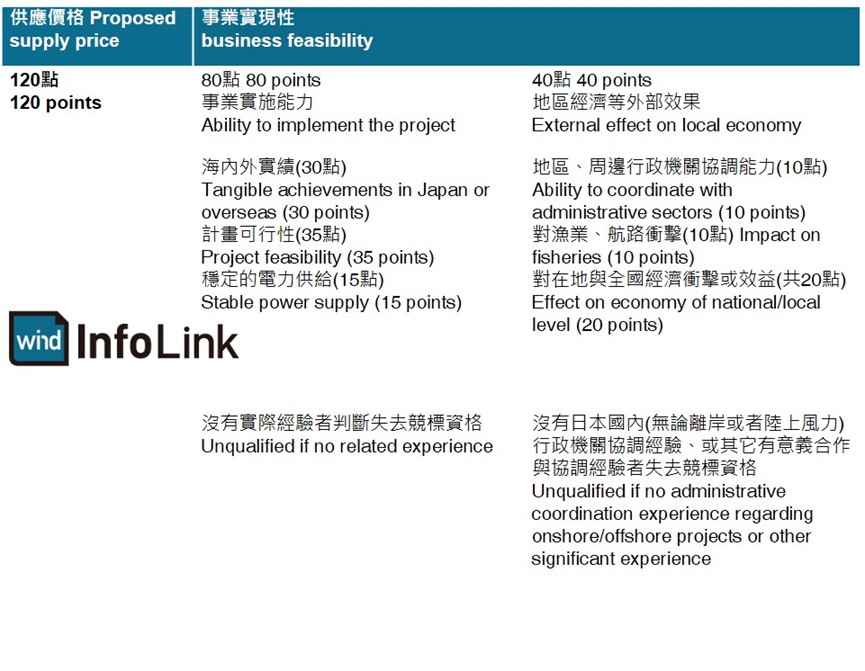 Projects in Japan’s four designated promotion zones are expected to be auctioned in the second half of 2020. The floating wind project applies a FIT rate of JPY 36/kWh, while the bottom-fixed wind farms will be financed by FIT based on auctions. With clear policy, it is expected that Japan's offshore wind capacity will grow along with upcoming auction rounds in the next decade.

Although there is no strict local content requirements for offshore wind farms in Japan and price is the main factor for developers to win the project, the dominance of Japanese developers participating in auctions in the promotional zones indicates that strong domestic base is needed to develop wind farms in Japan.