Overseas markets, which have been experiencing growing solar demand since the second half of 2019, have run into headwinds as a result of COVID-19 pandemic. While timelines of auction for utility-scale PV projects in several regions such as Europe and the Middle East have been postponed, the construction of some utility-scale projects is continuing in these marketplaces.

This indicates that demand from utility-scale projects has been delayed. Meanwhile, the stay-at-home orders issued in Europe and the U.S. caused bigger impact on distributed generation systems. For example, manufacturers which target distributed PV sector may see decreased order volumes. Overall, InfoLink has lowered the full-year demand forecast to 108.8 GW as prospects of overseas markets turn gloomy. 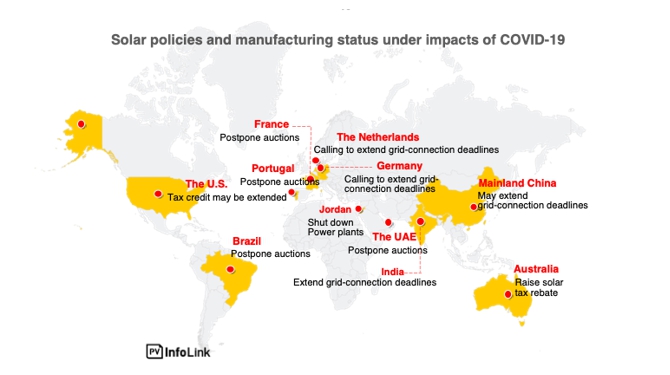 Solar demand in the face of pandemic

So far, many projects have secured financing at the initial stage, and to protect invested resources and funds, as well as the PV sector from the knock-on effects of COVID-19, the most common measures are to extend grid-connection deadlines and auction timelines. However, most countries did not provide an exact new timeline as it’s difficult to predict the development of the pandemic. For now, C&I rooftop projects are feeling higher impacts, whereas some utility-scale projects are still under way.

Against this backdrop, overseas demand is forecast to remain sluggish over the second to third quarter. In contrast to overseas markets, demand in China is relatively stable as the coronavirus outbreak has been gradually curbed and the Chinese government has released new solar FIT levels before mid-April. Therefore, InfoLink’s forecast for Chinese demand remains at 39.5 GW. In this case, the Chinese market will hold up demand in the second and third quarter.

2020 is a tough year for overseas markets. The escalating pandemic across the world has frozen or delayed demand, driving down the forecast for global module demand to 108.8 GW. If the pandemic persists, the demand level could fall to 98.2 GW under pessimistic scenario, and the market share could decline from 69% to 64%.

In early February, most Chinese manufacturers suspended production or lowered utilization rates due to the coronavirus outbreak, sending shock waves to the solar supply chain. As operations began to resume from the end of February onwards, utilization rates across the supply chain returned to around 80% in March, with supply of modules catching up. However, the virus outbreak became a pandemic, threatening an economic crisis.

The impacts of COVID-19 have rippled from the supply side and out to the manufacturing sector in March through April. With demand looking uncertain in the second quarter, end users have remained conservative. Even module manufacturers have lowered their prices, demand is not likely to rebound because projects have been postponed. The recent mono PERC prices have come in at US$ 0.198-0.21/W in overseas markets. The pessimistic market outlook is being felt through the supply chain. Prices will be treated conservatively for the short term.

Despite the ongoing pandemic, most Tier-1 module manufacturers still remain the same shipment target for this year. Reasons behind are most of these manufacturers’ orders signed for the second quarter show little change and the order volumes they have received are significantly higher than Tier-2 produces, for they enjoy advantages of branding, channels, and costs. It’s expected that the market share of top 10 module manufacturers will grow markedly.

PREV Good news, bad news on PV in the pandemic
How coronavirus could impact the solar industry supply chain: An analysis NEXT
Back