Good news, bad news on PV in the pandemic

The COVID-19 pandemic is showing no sign of abating in overseas PV markets. As of May, the diseases spread to over 215 countries and territories. Germany, France, the U.K., Iran, Brazil, Turkey, and Russia recorded more than 100,000 of coronavirus cases. Brazil, Turkey, and Russia, where the disease is spreading at a ferocious pace, have become new epicenters of the pandemic.

The economic downturn brought by the COVID-19 pandemic is pronounced. The global economic data suggests that in the first three months of the year, US GDP contracted 4.8%, the lowest in ten years, while eurozone GDP fell 3.8%, the sharpest decline on record since 1995.

The coronavirus outbreak has plunged PV markets in Mexican, Brazilian, Turkish, Indian, and Pakistan into uncertainty. But European markets are expected to see a ramp-up in installation if the pandemic is brought under control in the second half of the year, said PV Men after learning about views of several module and inverter producers.

While the pandemic has hit economy in the Philippines, Vietnam, Singapore, South Korea, and other Asian countries to different extents, Japan, South Korea, and China will account for part of module shipments in the second quarter as they are faring better.

After more than two months of national lockdown, several European governments started relaxing COVID-19 measures around the Labor Day break. “Many countries in Europe are reopening in May,” said a representative of a module producer’ branch in Europe. “Large-scale projects, such as those in Spain, have been postponed, but distributed projects are still under way.”

The representative added that their company’s shipments and orders volumes have remained stable. Tier-1 module makers have a backlog of orders until the end of the second quarter and even August. Some of them even have to handle domestic and overseas orders that are scheduled for delivery at the same time, amid an ongoing rush to commission some PV projects before June 30 in China.
In fact, renewables have proven to be resilient amid the pandemic. Countries including the Netherlands, Belgium, France, Spain, and Portugal are sticking with their renewable energy targets and policies

Germany is among countries that are striving to undergo energy transformation. According to a survey conducted during the COVID-19 pandemic by German market research firm EuPD Research, around 20% of homeowners surveyed are going to “install or order” a PV system. A white paper released by the German Renewable Energy Federation in April claimed that Germany’s cumulative PV capacity will reach 1,000 GW by 2050.

Israel also chose to invest in renewables to boost post-COVID-19 economy. Under a new energy and water infrastructure plan, it pledges to deploy 2 GW of PV capacity and make considerable investments to facilitate efficiency development. This plan will entail around USD 7.1 billion. State guarantees will be provided by the government to support project development 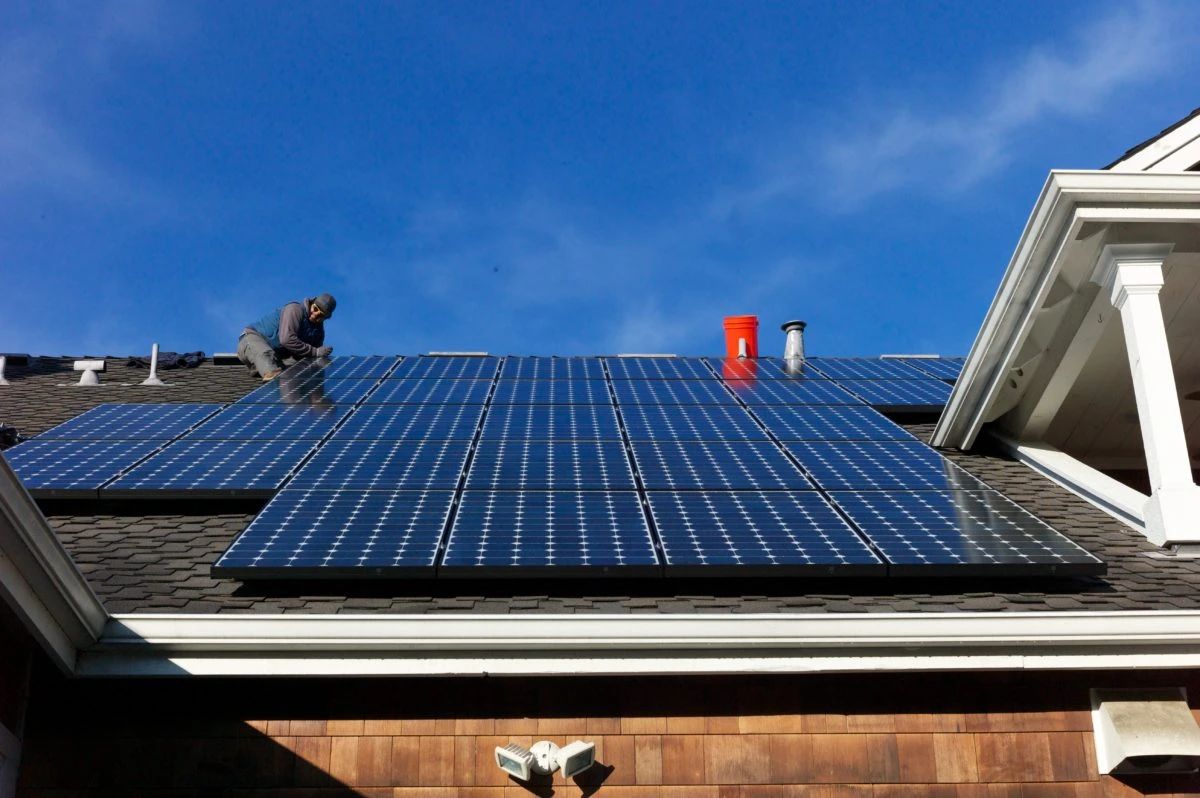 Other countries may take different approaches in light of COVID-19. For instance, Turkey has again postponed a 1 GW utility-scale auction until 2021. The tender was originally planned for January 2019.

Investment flows into renewables continues in the U.S.

The U.S. solar companies, including SunPower, Sunrun, and First Solar, have taken measures such as closure and pay cuts to cushion themselves against the impact of the pandemic. They have all withdrawn their fiscal year 2020 financial guidance.

According to Greentech Media, solar inverter makers SolarEdge and Enphase, which focus on the U.S. market, may slow shipments in the second and third quarters as the pandemic continues to prevail worldwide. Moreover, the pandemic forced Enphase to delay launching an energy storage system.

Despite slow growth, large-scale PV continued to be financed and developed in the U.S. sPower, a developer based in Utah, has closed on a USD 350 million tax equity for a 620 MW solar project in Virginia last month. Just a few weeks ago, Virginia Governor signed a bill to achieve 100% clean energy by 2045. 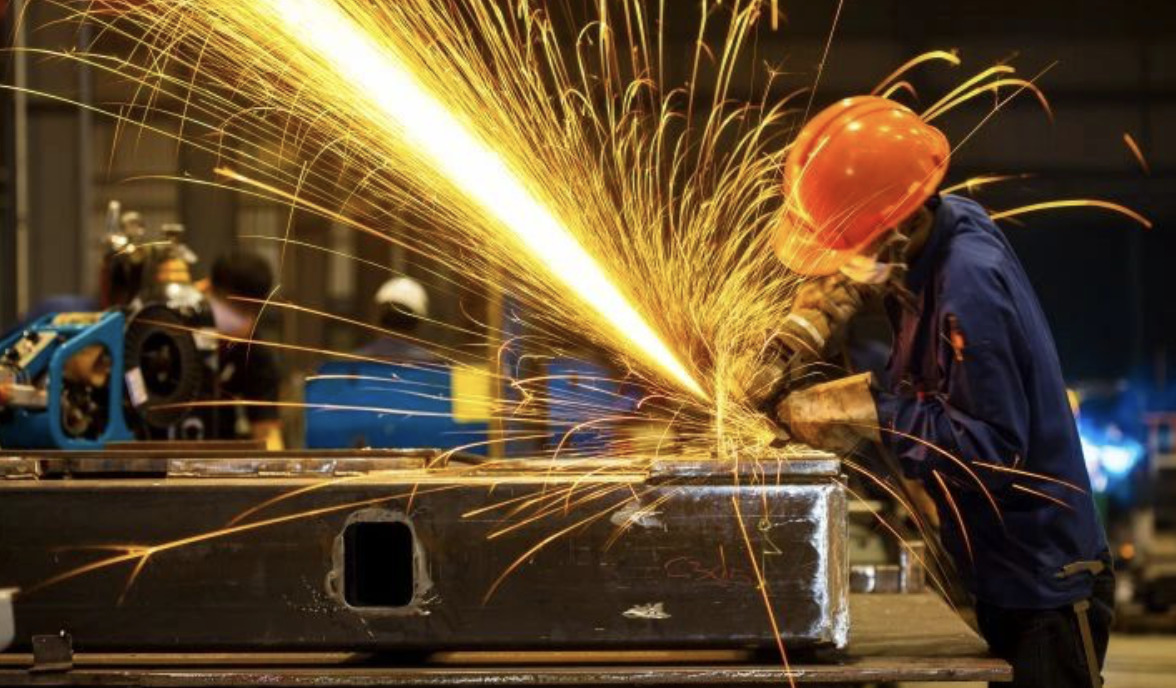 Internationally renowned firms such as SoftBank Group and Total S.A., as well as Engie North America and Vivint Solar have pulled off successful ventures in the energy investment and transaction market.

However, the Trump administration continues to take a tough line on solar imports by slapping stringent tariffs; it has again removed the tariff exemption for bifacial modules. The administration reportedly mulls raising tariffs on products related to the electricity industry—mostly on steel materials, whose prices have a direct impact on the costs of inverters. And although inverters account for a small share of the total costs of a renewable project, they are increasingly hit by additional duties.

According to statistics by Mercom Capital Group, India assigned 3.6 GW of solar capacity in April, decreasing by 45% than the month before. Prior to March, the figure was over 8 GW. 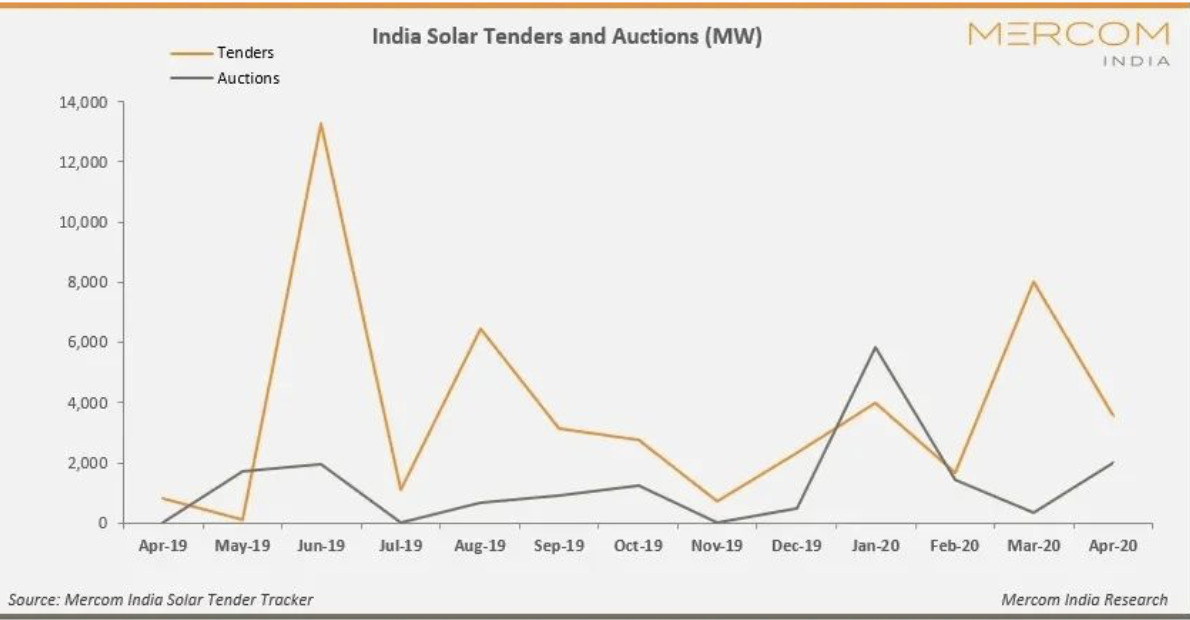 The Indian Energy Exchange, India’s largest online electricity trade platform, reported a 6.6% decline in the traded volume of electricity in April and a 25% drop in electricity demand during peak hours.

To cushion the COVID-19 impact on the local solar industry, public utility firms including the Solar Energy Corporation of India (SECI) and National Thermal Power Corporation Limited have extended the invitation-to-bid deadlines for solar auctions.

Pakistan has confirmed over 23,000 COVID-19 cases as of May 6 and the number shows no sign of diminishing. As the country is still in lockdown, the development and installation of PV projects are delayed by the pandemic to varying extents. However, the National Electric Power Regulatory Authority, the power regulator in Pakistan, has granted two local PV firms a power generation license for PV plants with a combined capacity of 100 MW. The investment totals USD 100 million. The firms will prepare for their projects if the pandemic starts to subside.

According to a PV media outlet, nine solar module manufacturers makers with a combined production capacity of around 100 MW in Bangladesh have called on the government for remedy after they suspended production for 40 days due to the COVID-19 outbreak. Specifically, the module makers asked for a relief of BDT 500 million (equivalent to $58.9 million), interest-free loans, and tax incentives over the next five years to weather the crisis.

The Bangladeshi government extended the industrial shutdown until May 16. Representatives in the local PV industry have also called for speeding up a program for solar rooftops on public buildings to generate work for manufacturers and installers.

If the recession driven by COVID-19 persists beyond 2020, more wind and solar power projects might be postponed or cancelled in Asia Pacific, as long-term economic decline will make it difficult for developers to secure financing, said Wood Mackenzie.

Having been hit hard by the coronavirus outbreak and economic crisis, Brazil’s PV industry is floundering. “We haven’t shipped to Brazil for a long while,” remarked an inverter maker. “The whole Latin America is practically shut down.”

In Mexico, the electricity regulator National Center for Energy Control has held off the commissioning of new solar and wind power generation projects until new notice.

This move has dealt a heavy blow to the PV industry in Latin America. President Andrés Manuel López Obrador takes an opposing stand against clean energy development. Earlier, he called off renewable energy auctions and proposed to have state-owned utility CFE operate all 13 GW of power facilities to raise Mexico’s electricity generation capacity.

As COVID-19 is spreading around the world, governments in the Middle East have extended the invitation-to-bid deadlines for some solar auctions. Meanwhile, with LCOE for renewable projects declining rapidly worldwide, Abu Dhabi’s 1.5 GW PV tender set a new world record for the lowest solar bid.