On the evening of 30 July, India’s Ministry of Finance, Department of Revenue officially announced a 25% safeguard duty on solar cells (whether or not assemble in modules) produced in China, Malaysia and other developed countries according to the final suggestion of India’s Directorate General of Trade Remedies. The duty initiates on 30 July.

By the evening of 13 August, the Ministry of Finance has notified that Indian government will not insist on the payment of safeguard duty before the public hearing on 20 August 2018. However, the solar cells and its related products, which were imported from the countries without exemption before 20 August, still have to be executed a bond for the amount assessed in case if the notification imposing the levy is upheld.

India is the major export market for Chinese PV modules. In 2017, China exported 9 GW of modules and 1.2 GW of cells to India, representing 32.1% of China's overall exports of modules and cells. In the same period, the module demand in India was 10.5 GW, and the market share of Chinese modules have reached over 90% in the market. This strongly demonstrates that India is heavily relying on China's production capacity of modules and cells to accomplish its target, installing 100 GW by 2022. However, if the duty is approved, not only Chinese manufacturers will be severely impacted by losing one of their major exporting market, but also the development of the Indian solar market will be affected. InfoLink is going to analyze the possible effects toward the Chinese and Indian markets from two aspects, supply and demand, if the safeguard duty is imposed officially.

The Overview of Indian Market Demand

India is targeting at 100 GW installed capacity by 2022, and the annual demand in average will exceed 10 GW. However, the nonstop trade wars impact the exports of Chinese modules and cells. The module exports and the cell exports only achieved 3.6GW and 0.7GW respectively, which decreased by 33% compared with the same period in 2017. After 30 July, InfoLink believes that the amount of PV installation from 2018 to 2019 will be affected, therefore the total demand forecast is revised down to 8GW for this year accordingly.

China supplies about 90% of India's PV demand. Based on the China Customs export data from InfoLink, it shows that 88% of the current demand is focusing on conventional multi-Si modules, of which the mainstream is 72-cell 325W, 320W, 330W and 315W multi-modules. Conventional mono-Si modules account for 10% of India's overall demand, of which the most popular are 340W and 345W mono-modules. The rest of market share is taken over by mono-Si PERC, multi-Si PERC, and N-type modules, representing about 2%. According to the above data, it can be seen that the Indian market is still dominated by China's domestic mainstream module types. 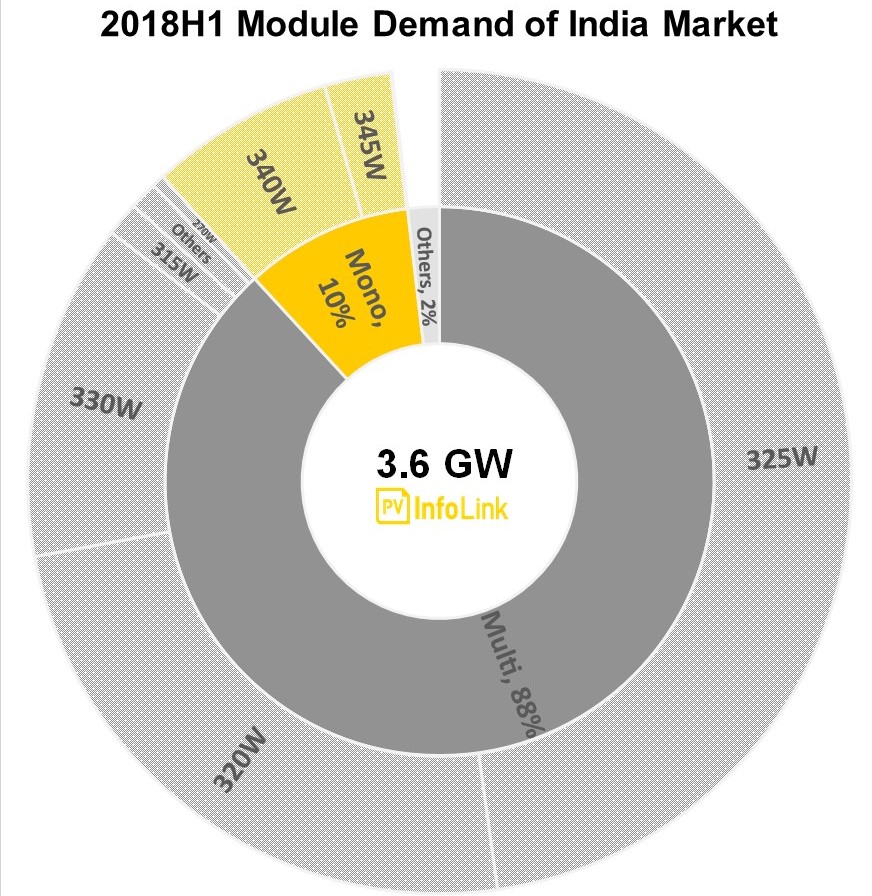 Based on the module export statistics from China's customs data in the first half of 2018, the top 10 Chinese module suppliers in the Indian solar market accounted for 76.5% of the total module exports from China to India. 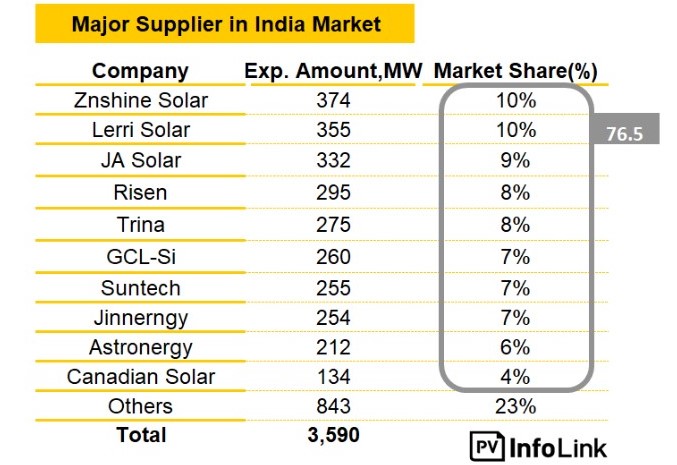 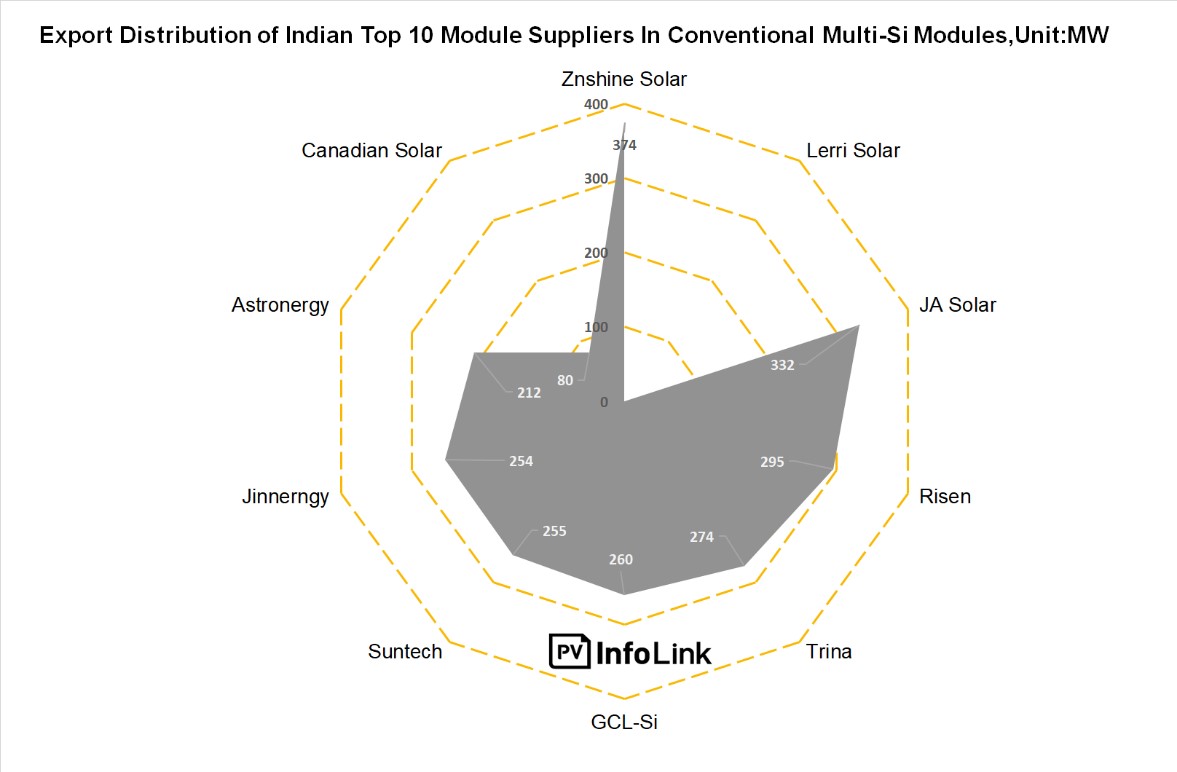 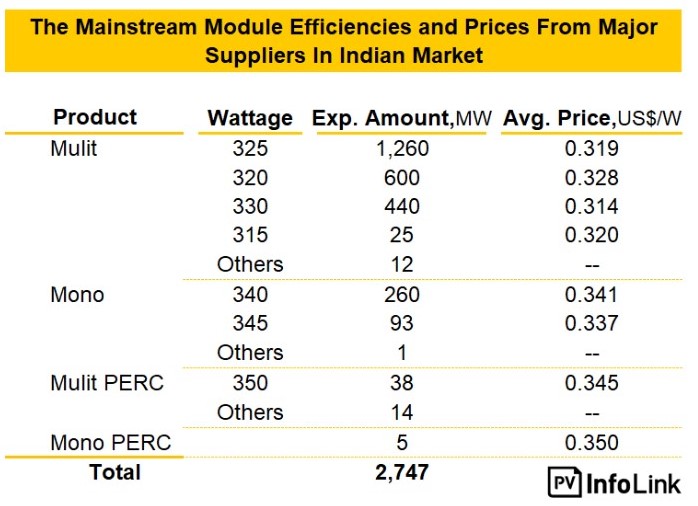 Recently, China's overall supply chain costs dropped considerably due to the impact of 531 policies. The overall cost of conventional multi-Si modules from vertically-integrated suppliers is around US$ 0.23-0.24/W currently. If 25% duty is imposed, the overall cost will rise to US. $ 0.289/W, while it is still lower than the producing cost in India, US$ 0.311/W. If manufacturers source cells from China and assemble modules in India, the overall cost is equally matched the cost of Indian-made modules. The cells and modules from Southeast Asia are exempted from the duty. Although the manufacturing cost in Southeast Asia is higher than the manufacturing cost in China, its overall module cost is at US$ 0.26/W only.

* The cell costs in 2018 was calculated based on July’s wafer prices and the production costs of cells.

After China's announcement of 531 policies, all module manufacturers are proactively to develop the overseas markets, and India become their exporting priority due to its high demand of solar products. According to the module export statistics from China's customs in the first half of 2018, Indian PV demand took up 20% of China's module exports in the period. Among the top 10 module suppliers around the world, except for Jinko, Canadian Solar and Hanwha Q-cells, Indian market represented more than 10% of other major suppliers' exports from China; besides, the exports from China to India for Lerri Solar, Risen, Suntech, and Talesun were all over 30% of its total exports.

However, if the imposition of a 25% safeguard duty on imports of cells and modules becomes true, Southeast Asia's cells and modules will turn to the first choice for Indian buyers, and those companies who depend on India market will be strongly impacted for sure. 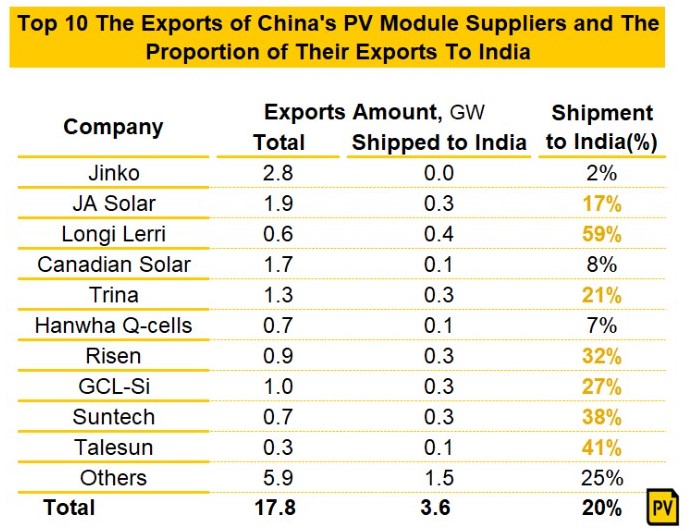 In sum, if Indian safeguard duty is eventually approved, it will heavily impact not only Chinese module exporters, but also the development of Indian PV market. The possible negative outcomes are as follows:

1. The Shrinkage of Market Supply and Demand

India has relied on the PV module supply from China for a long term. The overall cost of Chinese modules is still lower than the cost of Indian-made modules after the 25% duty is added. However, the abovementioned competitive strength is only for the major vertically-integrated module companies. In other word, the cost of other tier two manufacturers will be increased by the duty. In fact, except for the Chinese exporters who really rely on India, other exporters will definitely not consider nonprofit markets so they may reduce the exports to India significantly. The Indian PV market supply will be influenced accordingly.

2. The Increase of Infrastructure Costs

After 25% safeguard duty is imposed, India's top choice will be the modules from Southeast Asia except Malaysia. However, India may not be the priority of Southeast Asian module exporters. The offering prices from the exporters will remain competitive even considering the US section 201 and EU MIP; therefore, in order to pursue high profit, the focus of exporters will be toward to the US and European markets instead of Indian market. Even the domestic production capacity in India is still insufficient, can’t afford the annual construction demand. It means that India still needs to depend on Chinese exports a lot and the project constructing costs will rise accordingly.

The impression for Indian PV market used to be low efficiency and cheap, while the market is getting rid of this impression gradually and the current mainstream module efficiency in the market is converging toward the general solar market. If Indian buyers are not willing to increase the constructing costs and the supply from Indian manufacturers and Southeast Asian exporters cannot fill in the gap of module demand, the Indian solar market will be occupied by the PV modules with low efficiency again, which are the alternative solution offering by those Chinese exporters who heavily depend on the market.

PREV Breaking: US excludes bifacial modules from solar tariffs
Updates on India's safeguard duty NEXT
Back