Here comes InfoLink’s cell shipment ranking! According to InfoLink’s supply / demand database, the top one cell manufacturer was Tongwei in 2018. Aiko and UNIEX both ranked second. URE and Motech ranked in fourth and fifth respectively. 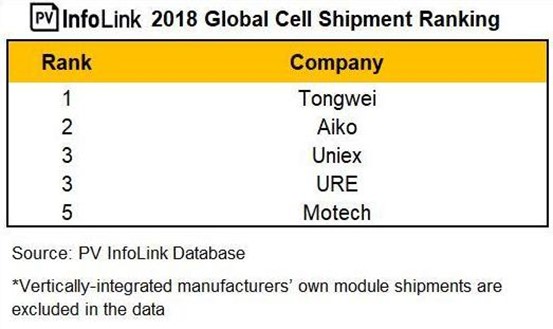 2018 can be a turning point for the cell force. With the large-scale and cost advantage of new capacities, top-tier manufacturers like Tongwei, Aiko, and UNIEX witnessed a shipment of over 4GW. The total shipment surpassed 6.5GW for Tongwei, particularly, far higher than other cell makers. It’s projected that Tongwei, Aiko, and UNIEX will continue to be the top three cell manufacturers in 2019. On the other hand, because the manufacturing costs are higher for Taiwanese companies and Taiwan cell makers’ advantages in the European market were greatly affected after Europe terminated the MIP, Taiwan’s competitiveness plummeted right away.

In addition, the most important event for the cell sector in 2018 were PERC capacity expansion and efficiency increase. According to InfoLink’s investigation, Aiko, Pingmei, and Tongwei were the manufacturers with the largest PERC cell shipment. It’s noteworthy that the “General Top Runner Program” will bring a large amount of high-efficiency PERC cell demand in 2H18. Also, due to the earlier production line transfer, Aiko became the biggest supplier for bi-facial cells with a shipment of 1.4GW, much higher than other cell makers.

Yet, aside from cost reduction, the trend of the next-generation cell technology remains unclear. The mainstream trend this year will be continuously lower the share of conventional cells. Meanwhile, it’s projected that the shipment of bi-facial modules and modules with larger-size wafers will gradually rise. How will cell makers adjust their production lines will be critical to whether they can get hold of the next opportunities.