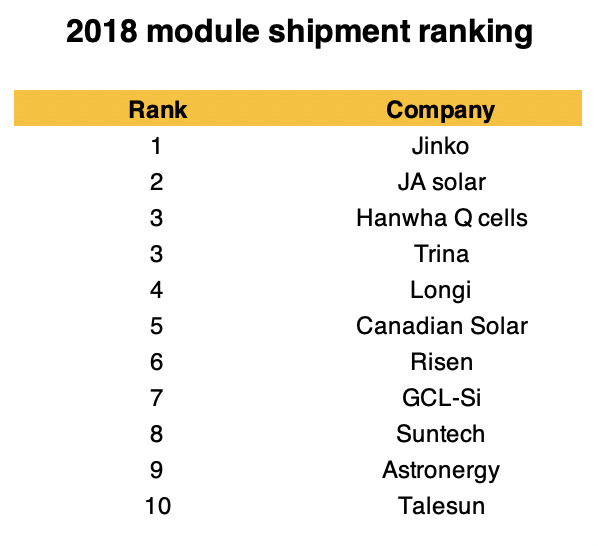 Rising Proportion of Top 10 Manufacturers’ Shipments in the World

The reasons why top-tier manufacturers can continue to grow in shipment after China announced the 531 Policy is not just because of their previous strategies deployed in the overseas markets, the continuous improvement in product competitiveness is also a key to the rising amount of shipment.

Looking back at 1H18, more manufacturers have upgraded conventional cell production lines to PERC. Top 10 manufacturers have aggressively expanded capacities of new module technologies. By late-2018, TOP 10manufacturers with a PERC cell capacity of over 30GW and 15GW for half-cut modules.

Module profits may squeezed by mid-to-upstream sectors of the supply chain.

Although demand will remain strong during the off-peak season in Q1, the market should witness weak demand in 1H19 but strong demand in 2H19 owing to a more concentrated demand from China and the overseas markets like Europe and the US in 2H. It’s projected that demand will be the weakest after the Lunar New Year. By then, from polysilicon to module sector of the supply chain will experience drop in prices.

However, despite the higher demand in 2H19, subsidies have been lowered every year for different countries. Therefore, even though module prices may rebound during the peak season, the range of price increase is not likely to be as significant as that for the mid-to-upstream sectors of the supply chain. This was also the greatest challenge faced by module manufacturers this year. That’s why all module makers are aggressively coming up with new technologies, for example, products with larger-size wafers, full square, or half-cut, multi busbar, shingled, and bi-facial etc. They did so to further increase the cost effectiveness of products, widening the gap with conventional modules to pursue higher profits.

Looking ahead for 2019, the global demand is expecting to increase 20GW from 91.5GW in 2018 to 112GW in 2019. The market share of the top 10 manufacturers will remain at about 70%., but we can foresee that mono products will take up nearly 60% of the total products. In addition, the actual shipment of special modules will rise substantially, and thus manufacturers with lower high-efficiency or special module shipment ratio may witness reduced profits this year.