China module exports surged in the first half of the year, peaked in July, and dropped evidently in the third quarter. Customs data compiled by InfoLink show China exporting 12.7 GW of modules in September, a 43% year-on-year increase, but 11% month-on-month decrease, the second consecutive negative growth, signaling waning inventory draws from overseas markets.

From January to September this year, China exported 121.5 GW of modules, an 89% year-on-year increase. Export volume of the third quarter is 69% higher than the same period last year, but much lower than year-on-year increases of the first and second quarter this year (112% and 94%, respectively). This may be attributed to slower inventory draws in the second half, as some countries still hold inventories after importing great amounts of modules in the first half of the year. All markets post negative month-on-month growth in module imports, except Africa. 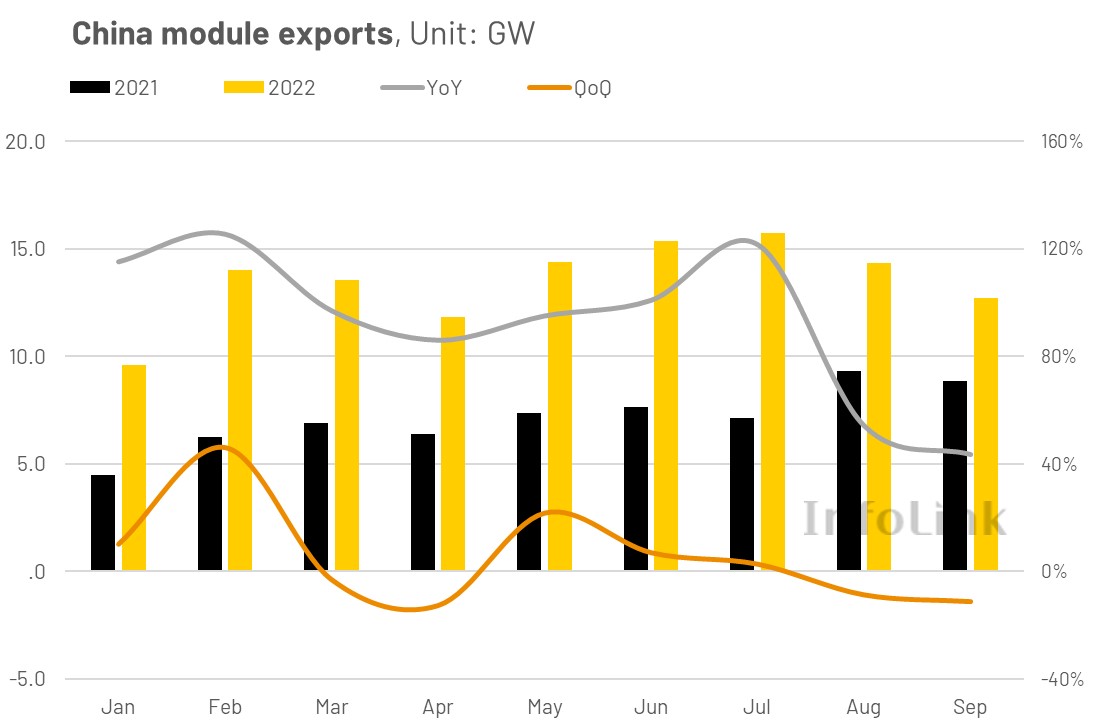 Europe imported 7.6 GW of modules in September, an 11% month-on-month decrease and an 82% year-on-year increase. As of September, the bloc had imported 67.8 GW of modules, accounting for 55.8% of China’s total module exports, making it the biggest market for Chinese modules. The figure is higher than the 30.7 GW of same period last year, but a much smaller increase compared to that of the first period this year.

Prices for traditional energies, such as coal and natural gas, surge this year amid regional conflicts, underlying the imperative to develop renewable energy. Governments set out policies for energy transition, boosting demand for renewables. During the first half of 2022 alone, Europe imported 42.4 GW of modules from China, more than the 40.9 GW of the entire 2021.

However, serious labor shortage stymies PV development in Europe. Labor force for installation falls short of the surging order volume this year. Doubled with inverter shortage, many projects are delayed. Inventory draws began slowing down in the third quarter, for manufacturers have cumulated some backlogs from previous imports. The biggest buyers, such as the Netherlands, Spain, and Germany, all post smaller import volumes in the third quarter. In the fourth quarter, import volumes will keep declining, as the year’s end is usually a low season of Europe’s import activities.

The Asia-Pacific imported 1.8 GW of modules from China in September, a 3% month-on-month decrease and a 13% year-on-year decrease. As of September, the region had imported 22.9 GW of modules from China this year, a 40% year-on-year increase. The Asia-Pacific region is relatively stable, compared to other markets. This year, due to India’s imposition of the BCD on cells and modules, import volume surged in the first quarter, then tumbled in April as the BCD took effect. Henceforth, imports were steady during the second and third quarter.

India, the largest market within the region, has seen sluggish demand since the BCD took effect in April, posting year-on-year decreases every month ever since. Other major importers are Japan and Australia, which respectively accounts for 22% and 18% of China’s module exports to the Asia-Pacific. The two became the biggest importers, after India lost momentum. In September, Japan’s import volume rose marginally, while that of Australia slightly declined. Changes of import volume of southeast Asian countries, such as Thailand, the Philippines, and Malaysia, are inconsistent but all relatively small. The cumulative import volume of these countries saw small growth compared with last year.

Brazil is China’s largest market in the Americas, accounting for at least 70% of all the nation’s modules exports to the continent. The Brazilian government will start to charge distributed generation projects a grid fee in 2023, resulting in an installation rush. Brazil imported 14.2 GW of Chinese modules during January and September, a 118% year-on-year increase. Subject to lofty prices, monthly import volume peaked in August and dropped by 14.6% to 1.57 GW in September. Manufacturers may pare back purchases for the coming three month, thinking current inventories are sufficient for the installation rush.

Mexico, Columbia, and some other countries see little change in import volumes. Chile posts declines, but cumulative import volume this year is much higher than that of last year. Overall, import volume of the Americas hinges on whether Brazil can sustain its inventory draw at the level of the first half this year.

The Middle East imported 0.8 GW of modules from China in September, a 26% month-on-month decrease and a 23% year-on-year increase. The month-on-month drop is only 0.3 GW because the level last month was already small. As of September, the Middle East had imported 9 GW of modules from China, an 80% year-on-year increase. Saudi Arabia’s import volume in September rose markedly, while the rest of the countries saw negative growths in import volume, including the UAE, of which import volume increased successively from January to August.

Africa imported 0.27 GW of modules from China in September, same as the level in the previous month as well as last year. Cumulative import volume came in at 2.5 GW, a 32% year-on-year increase. 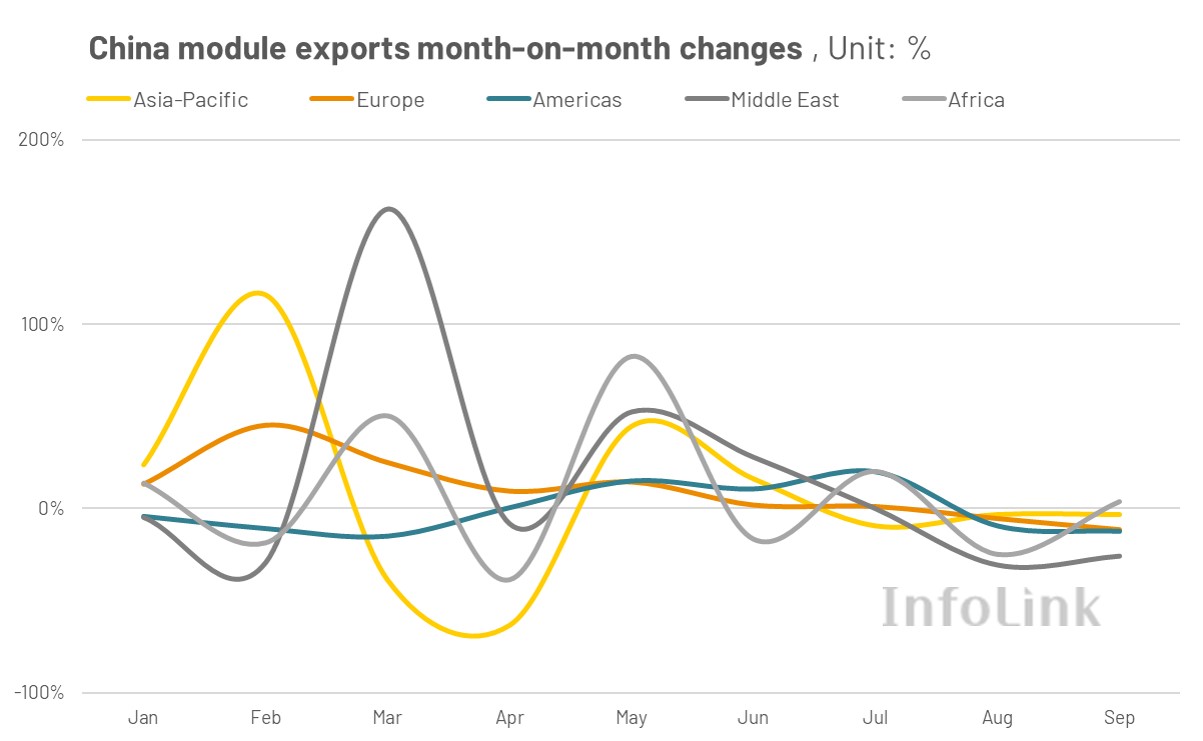 Inventory draw from Europe will keep waning in the fourth quarter, as winter comes to the north hemisphere, whilst labor and inverter shortages persist. Import volume of some markets will rise, thanks to installation rush by the end of the year. Still, given dwindling demand from Europe, the largest market, China’s module export volume is expected to decline further.