Tongwei, Aiko, and Runergy secured leading positions in the cell shipment ranking for the first half of 2022. The top-five has seen a slight reshuffle, with Solar Space climbing to fourth place this time as production expansions gradually came online, whilst Jietai returned to the top 5. 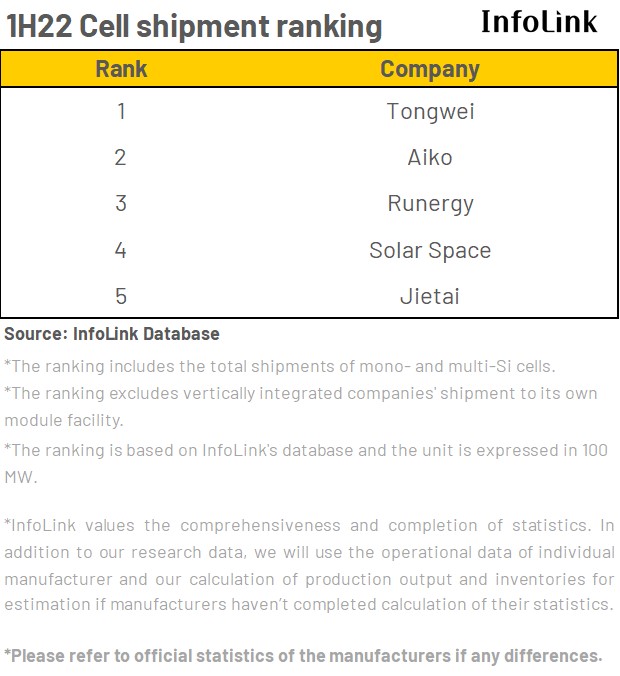 The top 5 manufacturers together shipped 59 GW of cells in the first half this year, a 60% YoY increase. In addition to increases in shipment volumes, cell gross margin has recovered since the second quarter, thanks to short-term structural changes that put off line modifications slightly behind original schedules. This resulted in only 14-15 GW of mainstream cell supply was available in the second quarter, way shy of downstream demand. Such shortage, along with stronger demand overseas that shored up modules utilization rates, underpinning cell demand and allowed cell prices to rise. Against this backdrop, gross margins expanded marginally during the second and third quarter this year, compared with last year’s levels. First half 2022 financial findings showed gross margin of M10 (182mm) cells rose to RMB 0.06-0.09/W.

Besides vertically integrated businesses, professional cell manufacturers are poised to mass produce n-type products in the second half of the year. InfoLink expects to see, by the end of the 2022, more than 60 GW of TOPCon production capacity and 14 GW of HJT production capacity, among which 2-3 GW are for R&D and pilot running purposes.