The global module shipment ranking in the first half of 2022 saw similar manufacturers, but slightly shuffled. Competition among the top 4 largest manufacturers intensified, leaving the rest of the manufacturers behind with significantly diversified shipment volume. The big is getting bigger.

Based on the financial statement published by the top-four, all of them shipped more than 15 GW. Jinko, having shipped 18.21 GW, witnessing the biggest increase, up 113% compared with the same period last year, and thus recured the top position. Trina, utilizing its advantages in the distributed generation sector in China and overseas channels, shipped 18.05 GW, up 72% YoY. Longi slipped to the third place this time. While its shipment performance was just decent in the first quarter, its shipment exceeded all others in the second quarter, at 11.58 GW, making its shipment volume in the second half worth anticipating. JA Solar, with stable development, cost control, and overseas channels, saw shipment steadily growing to 15.67 GW, enabling it to take the fourth place.

Following the top five manufacturers are Canadian Solar, Risen, Astronergy, Risen, First Solar, Hanwha Q Cells, and Suntech. Statistics show that the shipment volume among these manufacturers started to diversify, averaging at 3.5 GW to 8.7 GW. Manufacturers outside the top-10 list shipped around 2 GW to 3 GW.

The module segment saw the gap between large and small companies growing, with large companies maintain their dominant positions. In the ace of high costs this year, the competition among Tier-2 makers will grow fiercer. 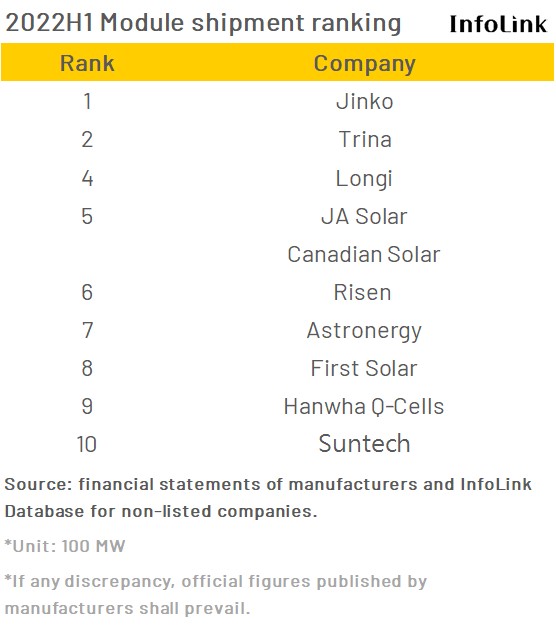 Rationale behind this growing corporate divide between the top-four and Tier-1 firms are company size, cost advantage, and overseas channels. InfoLink’s estimates show that the top 10 manufacturers shipped around 101.7 GW of modules, up 45% YoY. The top-ten dominated around 80% to beyond 90% of demand in the first half, of which the top-four accounted for 60% to 70%.

Quarterly performance of each manufacturer led to the biggest change in the first half. Overall, their shipment volume was divided in the first quarter, with some of the makers saw lower-than-expected shipment due to lofty prices and high costs, while other makers markedly lowered their shipments. With demand spurred by accelerated energy transition overseas, shipment volume grew as high as 36% in the second quarter. Looking into shipment distribution, Chinese manufacturers with high reliance on overseas markets had their domestic share decreasing to 20% to 30%; some of which experienced an increase in their market share overseas.

The top four's shipment targets this year averaged at least 40 GW. However, they shipped an average volume of 17.5 GW in the first half, meaning that they would need to ship 8.5 GW to 12 GW in each quarter in the second half to reach the minimal level of performance. With prices in the supply chain reaching the peak of the year in the third quarter, vertically integrated companies are caught between maintaining profits and meeting shipment target.