Tongwei and Aiko secured leading positions of the cell shipment ranking in 2021, followed by Runergy, Solar Space, and Lu’an Solar. The ranking stayed the same as in the preceding year, according to investigation by InfoLink. 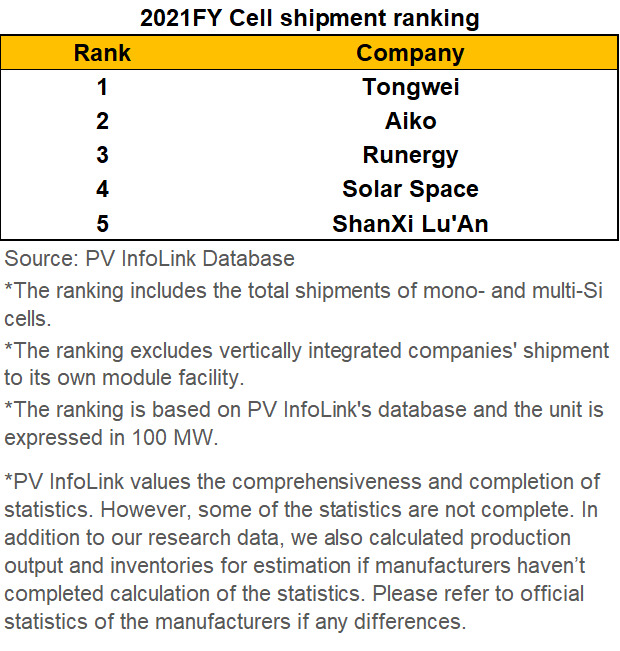 Having been caught between wafer and module sectors, cell manufacturers, with surplus PERC cell production capacity, only managed to post slim profits in 2021 amid upstream price hikes. With new in-house cell production lines successively commissioned in the second half of 2021, vertically integrated companies became increasingly self-sufficient, denting market share of professional cell manufacturers, of which growths started to lose momentum. Data compiled by InfoLink show shipments of the top 5 largest cell makers increased by 81% in 2020, but shrank to 36% in 2021, bearing out pressures professional cell makers received from the actively expanding vertically integrated companies.

Based on data of the top 3 cell makers (both mono-Si and multi-Si), G1 (158.75mm) cells saw market share plunge in the second half last year, with its market share coming in at 10%. Market share of M6 (166mm) cells sustained at 32%, even though utilization rates and production output dropped in the third quarter, as manufacturers opted for larger formats amid China’s energy intensity control, slowing down inventory draws. Cells made from larger wafers, such as M10 (182mm) and G12 (210mm) cells, saw market share reaching beyond 53%, with 38% in the first half of 2021 and 67% in the second half, a 29% increase.

In face of gloomy profits, the cell sector not only trimmed down utilization rates, but rescheduled capacity expansion projects, postponing capacities added during the second and third quarter to come online in the year’s end. In the first half of 2021, production capacities that are old or dedicated to G1 or smaller sizes gradually phased out.

With in-house cell production capacity, vertically integrated companies strangled profit growth of the cell sector, making it increasingly difficult for the latter to survive. Against this backdrop, and in fear of only 60-70% of utilization rates in both high and low seasons, some professional cell makers turn to develop high-end products for differentiation, whilst more of them reach out to other sectors across the supply chain or form alignments.