global end-user demand has room for growth. Capacities in the wafer, cell, and module segments are sufficient to fulfil demand for products based on 180-210mm format. In response to the shift of wafer sizes, manufacturers are gearing up for adopting 210mm format in their new capacities, and this means they have determined the size for the next five to ten years. Therefore, this year saw many solar companies adopting different sizes of wafers for their newly launched high-power modules, opening up to an era for 500Wp modules.

Since the beginning of March, overseas markets have been suffering from the COVID-19 pandemic and governments across the globe have been busy preventing the virus from spread. It’s foreseeable that 2020 is a tough year for overseas markets.

As foreign markets are now recovering, the higher-than-expected shipment volumes to Europe suggests that the impact on European markets might be smaller than expected. With the pandemic easing up gradually, InfoLink revises up global module demand to 112.5 GW and lowers the predicted market share of overseas markets from 69% to 65%.

Since the second half of 2019, mono-Si wafer manufacturers that coupled 140+ model of furnaces with 32-inch thermal field for their new capacities can produce M6 and 210mm wafers. InfoLink has learned that Longi uses such combination for its new lines, meaning that the company can produce wafers with any size smaller than 210mm.

It’s estimated that there will be at least 5,000 ingot pulling furnaces paring with 32-inch thermal field that can produce 210mm wafers this year. Translating into capacity, it is about 55 GW, which is enough to fulfil end-user demand for 210mm wafers.

From a wafer manufacturing perspective, the barrier lies in the limitation of slicing equipment as it requires modified or new machines to slice wafers into 210mm. However, the capex is still too high given that 210mm wafers haven’t entered mass production. Adopting 210mm will involve changes across the supply chain as well as end users, so it will take a while until demand manifests. The shipment volume is projected at 2 GW for this year.

Reverting lines from M6 to G1 will incur extra costs and affect production efficiency if manufacturers adopt 210mm for new lines straightaway, hindering them from achieving minimum costs. Therefore, cell makers except Tongwei and Aiko have yet to select wafer size so far.

Moreover, as the coronavirus outbreak has delayed capacity expansion timeline in the first half of the year, it’s unclear which equipment these manufacturers would select. Quite a few manufacturers that plan new capacities based on format bigger than 180mm require equipment to be compatible with larger formats, while those that can produce 210mm-sized cells require it to accommodate smaller formats. 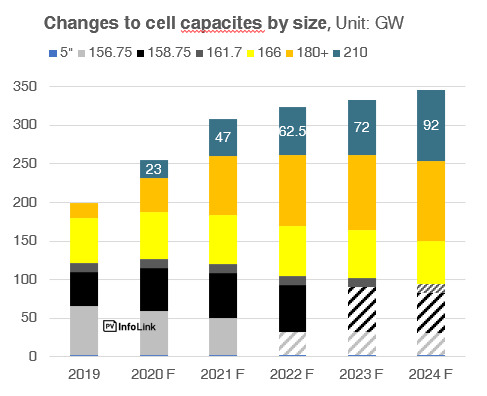 Larger wafers can deliver higher module power output and lower costs per wattage as well as LCOE. While half-cut + MBB has become a standard technology in this year’s module capacity expansion, module manufacturers are evaluating the return on investment of different sizes.

Overall, size formats other than 210mm will exist in the market this and the next year before 210mm becomes the mainstream.

Although many manufacturers have selected 210mm for new production lines, they could face production efficiency loss and cost issues if they have to revert to produce smaller sized products to meet market demand. Therefore, they are forming alliances to expand the share of larger wafers.

Despite being disrupted by the COVID-19 outbreak, module capacity ramps and upgrades are continuing due to size transition and end-user’s requirement on high power output. This year is expected to see more than 50 GW of new module capacity additions. Of the new capacities, more than 25 GW will be able to produce modules based on 210mm wafers, meaning that the module segment has no bottleneck in terms of production capacity. 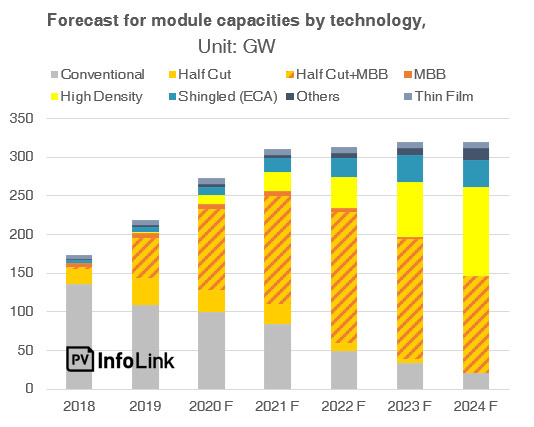 Shipment volumes of high-density modules based on larger wafers by Trina and Jinko will both increase in the second half of the year. Other vertically integrated companies took different technology roadmaps that vary slightly. At the meantime, module manufacturers are evaluating different sizes. Changes to wafer sizes will therefore continue to be highly discussed.

Trina Solar’s new Vertex module series is innovated in many ways. The modules are based on large-format 210mm wafers, multi-bus bars, and third-party solar cells. Moreover, the cell design is combined with a non-destructive cutting process and high packing density. The Vertex modules open a new era of 500Wp and provides the path to 600Wp or even higher.

Module manufacturers and PV plant developers are working toward the goal of LCOE optimization to meet end market demand. Although it takes time for some segments of the supply chain to gear up for larger formats, InfoLink believes that issues revolving the adoption of modules based on larger formats will be resolved in the near future.

While G1 remains the mainstream in the first half of the year, the market share of M6 will continue to grow in the second half due to requirement on higher power performance and lower costs. However, elimination of older capacities won’t happen overnight, and M6 will have higher market share next year. There’s still concerns over jumping from G1 to the largest format now; meanwhile, a few manufacturers are considering size beyond 180mm. Therefore, the direction and pace of size development is still uncertain.

InfoLink projects that it will take a while to eliminate the large volume of older production lines. So, there will be two to three mainstream sizes existing in the market in the two to three years to come. The key to larger wafer development in the module segment is the appliance of glass and inverter. Once the two elements are ready, manufacturers will move toward 600W. Although the development of wafer size progresses gradually, the industry is constantly discussing the mid-term development and compatibility of production lines in order to make their new capacities and products long lived.

The market saw more and more cell and module manufacturers engaging in 210mm, as such format can deliver lower LCOE and higher power performance. To bring power output to higher than 500W, a few vertically integrated companies have recently announced to adopt different formats based on their adaptability of existing wafer capacities and production efficiency. With solar costs reducing continuously, there’s still room for global demand growth. For now, wafer, cell, and module capacities are enough to satisfy demand for 210mm. 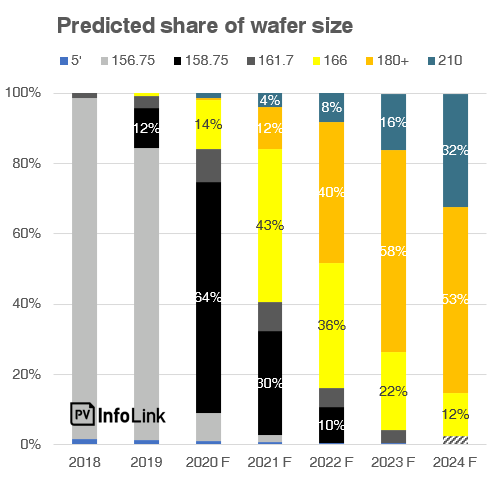 PREV N-type bifacial systems gaining momentum in desert region
Good news, bad news on PV in the pandemic NEXT
Back