With the release of the second quarter financial reports, InfoLink compiled the rankings of global module shipments in the first half of the year. Jinko shipped 4.8GW to win the first place of the global module competition in this period, followed by JA Solar, Longi(Lerri), Canadian Solar, Trina Solar, Hanwha Q-Cells, Risen, GCL-Si, Suntech, and Talesun.

According to the above demand forecast, the accumulated module shipments of top 10 manufacturers has accounted for 63.2% of the global module demand, and the small and medium enterprises in the PV market will be drastically impacted by the depression of the two major markets, China and India, in the second half of the year. It is expected that the TOP10 module manufacturers will take up 67% of global demand by the end of this year, which is much higher than 55% in 2017.

The Proportion of 2018 Mono-Si Products Is Rising Significantly.

Currently, the end market of PV module is more sensitive to the cost-performance ratio of mono-Si and multi-Si products than before. Although the prices of mono-Si and multi-Si wafers have a seesaw battle all the way this year and the PV market focus has also rotated several times, the mono-Si PERC products still stand out after the prices of mono-Si wafers declined and the production capacity of mono-Si PERC cell is increasing. Besides, its market share is raising gradually. In the first half of the year, mono-Si products took up 45% of global demand, and it also represented 54% of China's domestic demand because the large utility PV plants picked mono-Si products. The mono-Si products now reach its best performance in China this time. 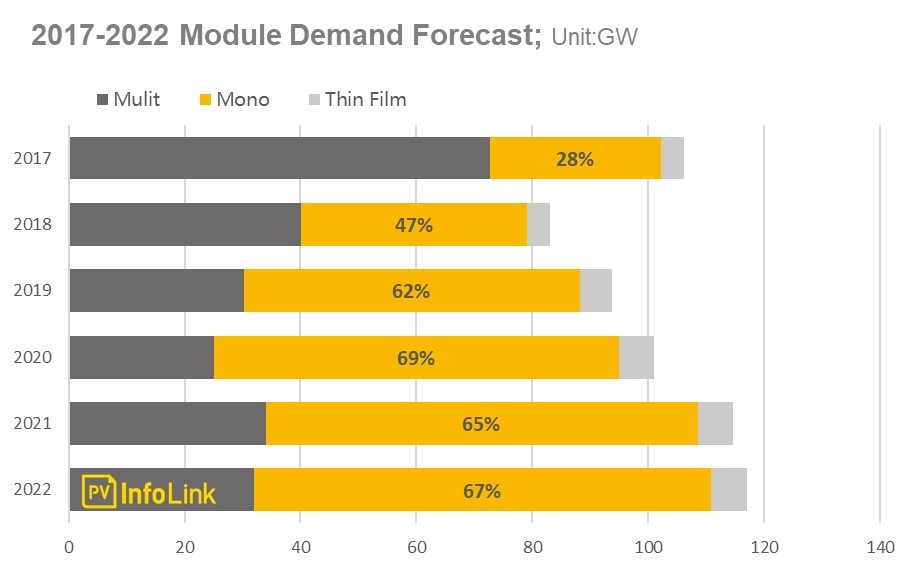 Looking forward to the second half of this year, China will focus on Top Runner Program, P-type and N-type mono-Si products have accounted for 85% of the total 5GW application. In addition, there are holding a wait-and-see attitude in the multi-Si products' major market, India. By the end of 2018, it is anticipated that the proportion of mono-Si products will be higher than its proportion in the first half of this year, reaching at 46-47%.

The Overseas Market Is The Key Battlefield In The Second Half Of The Year.

With the sharp decline in Chinese demand in the second half of the year, all module manufacturers are proactively to develop the overseas markets after China's announcement of 531 policies. The India's safeguard duty rate is still unclear, and the opinions in regard to the following trend of MIP in Europe remain divergent as well. The trade barriers between the two major PV markets will decide the future of overseas markets in the second half of the year.

According to the current market demand, if there are no additional incentive policies from 2018Q3 to 2019Q2, the module demand will be weak, and the market prospective is not optimistic. It is expected that the global module price will reduce slowly.